PAKISTAN: Some comments on the recent Lahore blasts ... 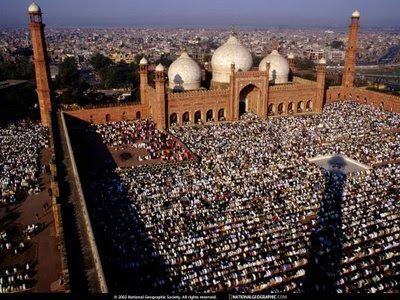 Before I start, here are a few admissions.

I haven't been to Pakistan since 1994/95. During that trip, I travelled only to Karachi and Lahore. I speak Urdu (the national language of Pakistan) but I don't read it fluently and hence don't have access to Urdu-language Pakistani newspapers. I have access to three Pakistani satellite news channels, including the public=owned PTV and the private channels of Aaj and Geo TV. I have been following reports and updates on all three channels. Suffice it to say that all three have devoted their broadcasts to this latest example of what Urdu speakers call dehshat-gardi (spreading of terror i.e. terrorism).

Pakistan may describe itself as an Islamic republic, but the real religion which unites all Pakistanis is cricket. This is a cricket-mad country. I remember being in Pakistan when an overseas team was touring, and seeing crowded city streets become almost deserted and shops open but with shop keepers having their eyes glued to the TV sets.

During the early 1990's, one Pakistani mufti became a laughing stock after delivering a fatwa that cricket was haraam (forbidden under religious law). His reasons? He claimed people who watched cricket rarely took time out to perform their nemaaz (the worship Muslims are required to perform at five set times a day). And that Pakistani women would get excited by watching Pakistani bowlers like Imran Khan rub the ball in a certain place as he walked back to start his run-up.

Perhaps the shock of the Marriot Hotel blasts in Islamabad shocked people in the middle and upper classes. However, cricket is something Pakistanis of all classes enjoy. Cricket is played in both slums and on the turf pitches of posh Pakistani private schools. Cricketers, be they Pakistani or foreign, are like the revered saints of this secular religion. Umpires (except when they are deemed to have made the wrong decision) are like the high priests.

Here is an excerpt from a report in The Age:

At least eight people were killed and seven Sri Lankan cricketers were wounded when a masked gang armed with Kalashnikovs, rocket launchers and grenades attacked the team bus and its security escort in Lahore. Six of those who died in the attack were police officers ...

The attack happened about 9am local time as the team was heading to Lahore's Gaddafi Stadium for the third day's play in the second Test ...

Witnesses said Lahore's Liberty Square district, home to designer boutiques and offices, became a battlefield as gunmen hiding behind trees opened fire. Television footage showed the assailants running through the streets carrying machine-guns and with rucksacks on their backs. Some had reportedly arrived on auto-rickshaws.

Sri Lankan captain Mahela Jayawardene said the gunmen first shot at the tyres, then at the bus itself.

"We all dived to the floor to take cover," he said.

Most of the injuries to team members were minor, but Lahore police chief Haji Habibur Rehman said it could have been much worse — the attackers fired a rocket that missed the bus, then threw grenades underneath which failed to explode.

"The plan was apparently to kill the Sri Lankan team but the police came in the way," he said.

Australian freelance cameraman Tony Bennett said explosions and gunfire could be heard from the stadium.

"Next thing we knew, the Sri Lankan team bus rolls up being sprayed by bullets," he said.

Pakistani air force helicopters later evacuated the team, including two on stretchers, from the middle of the stadium. The players were to leave for Sri Lanka later on a specially chartered plane.

Last night, the gunmen remained at large, and no group had claimed responsibility.

India showed its sympathy for Pakistan as it faced yet another terrorist attack.

India denounced as "hopelessly inadequate" Pakistani security after the attack and cited Islamabad's failure to crush militant groups on its soil.

India, of course, has absolutely no problem with curbing extremism on its side of the border. It's not as if religious fanatics in India are threateneing minorities. And to suggest that architects of theocratic terror could be elected to the highest posts in the land is clearly wrong. Only partisan extremists like this person could make such claims.

Who is responsible? Muslim extremists? Tamil Tigers? The Governor of Punjab has already decided who is to blame. The Australian reports on Wednesday 4 March 2009:

Punjabi Governor Salman Tahseer said the 12 masked and heavily armed gunmen who attacked the cricket convoy as it approached the Gaddafi stadium were not ordinary terrorists, but highly trained.

While last night no group had claimed responsibility for the attack, Mr Tahseer said the terrorists appeared to follow the same modus operandi as the Mumbai gunmen, who have been linked to the Pakistani Islamic terror group Lashkar-e-Toiba.

"I want to say it's the same pattern, the same terrorists who attacked Mumbai," Mr Tahseer said.

Certainly Tahseer's claims point to the most likely explanation.

UPDATE I: Already Sri Lankan Tamils are getting nervous at the possibility of Tamil Tigers' involvement in the Lahore attacks. Here is what Hamish McDonald, writing for the Sydney Morning Herald, has picked up from discussions on Sri Lankan media websites:

Take this exchange on the popular website www.lankanewspapers.com within a few hours of the team being attacked in Lahore.

A posting by "Pacha" noted that Tamil star bowler Muttiah Muralitharan was not among the reported victims: "Murali not injured suld have known this attack before."

"Lankaputha" chimed in with a reference to alternate captain Tillakaratne Dilshan, a recent convert to the majority Buddhism from the island's Muslim minority: "Interesting … And not even Dilshan, a Muslim."

A bitter voice of dissent came from "Derorak": "Yea, go ahead, blame that lone Tamil. Man! The Sinhalese must blame everything on Tamil. That is the extent of anti Tamil hatred of Sinhala racism. Poor guy, Sinhalayass gonna kill him."

After 25 years of civil war and 70,000 deaths, ethnic sensitivities are inflamed among Sri Lanka's 21 million people.

Should any evidence emerge that the Tigers carried out the Lahore attack, the potential for attacks by the Sinhalese majority against Sri Lanka's Tamils is very high. It was a virtual pogrom against them in 1983 that launched the civil war to create a separate Tamil homeland or Eelam in the island's north and north-east ...

... the attack also has the hallmarks and desperation of the Tigers' leader, Velupillai Pirapaharan, now pressed into a tiny pocket of the island's north-east jungles by a force of 50,000 government troops.

The attack would strike a final blow at hopes of President Mahinda Rajapaksa that a military victory will end the conflict. It would also punish Pakistan for providing the Colombo government with much of its army's powerful new weaponry.

Many Pakistanis are already saying the attack was the work of Muslim extremists. I'm sure many Tamils in Sri Lanka will be hoping and praying this is the case. I can hardly blame them. It's not easy being part of a minority community in a South Asian country.

its really shameful to see blasts in our own country