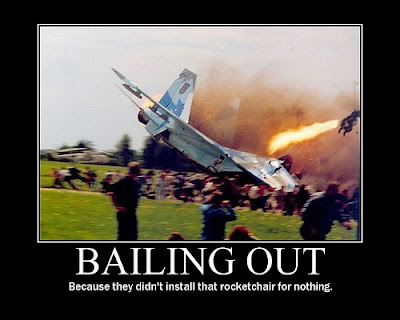 Here's a scenario for politically astute, frequently flying Canberrans. A passenger jet is about to make its descent to its destination. The pilot, Captain Blackadder, orders the cabin crew to prepare for landing.

But some of the crew have a cunning plan. They harbour a strange belief that this plane should fly with only one wing. They have strapped makeshift bombs to the left wing of the plane, attempting to cause irreparable damage, if not destroy it. They then plan to enter the cockpit, knock out Captain Blackadder and take charge of the plane.

It all sounds like a cunning plan. And one likely to lead to a rather bumpy crash landing, one with perhaps more crash than landing.

In certain sections of the Liberal Party, such delusional crash-landing politics has become the norm. Some Liberals seem to think it's not only possible but necessary to fly their party's plane with only a right wing. This kind of Liberal thinking might work well in campus politics, where often only the most doctrinaire ideological creatures congregate.

Nobody joins the Liberal Party to be left-wing. If you stand for compulsory student unionism, drug-injecting rooms and lowering the [homosexual] age of consent, you can choose the Greens, Labor or the Democrats.

He went further and promised conservative stacking to mould the NSW Liberal Party in his own image.

I'm about a long-term philosophical shift in the Liberal Party to the right ... I do not shrink from signing up people who believe in conservative agendas and the free market. I'll sign as many as I can up every day of the week.

That young man is now a federal member for a safe Sydney seat. He is hopefully now embarrassed by the words of his political youth. If he isn't, Tony Abbott might be in for a crash landing soon.

The arch-rival of this Young Liberal was then NSW Opposition leader John Brogden. Many NSW Liberal right-wingers, both young and old, were of the view that Brogden would be unelectable. They argued that the electorate would only vote for conservative Liberals. Small ''l'', limp-wristed wets would never attract votes.

The Liberal Party is a broad tent, capable of encompassing many views, but someone is auditioning for the role of clown.

Sadly for Brogden, the broad-tent model descended into a circus. Labor won the following NSW election. And it's fair to say that the likely result of the next NSW election would be better described as an ALP loss than a Coalition victory.

The ideological NSW Liberal right also cost Tony Abbott the Lodge. Abbott should have won western Sydney seats such as Lindsay and Banks. He could have defeated Julia Gillard's divided and demoralised ALP.

But the factional one-wingers in his home state, who prefer stacking branches with people with little incentive to hand out how-to- vote cards on election day, missed a golden opportunity to secure government for Mr Abbott, not to mention staffer jobs for themselves.

Liberals in Julia Gillard's home state have managed to pull off what Tony Abbott's Liberals could only dream of doing. They have soundly defeated both the ALP and the Greens. They have achieved the kinds of swings of seats that, if replicated at a federal level, could have avoided the prospect of a hung parliament in Canberra. And they did it with a leader who was probably to the left of his Labor opponent on a host of social issues.

Ted Baillieu is the kind of Liberal leader that Labor voters would feel comfortable voting for. He isn't a raving monoculturalist or a theocratic fruit loop. He isn't the sort of chap who would be invited to submit regular opinion pieces to a certain national newspaper.

Baillieu is the kind of Liberal premier New South Welshmen could have had back in 2006 if a certain group of Young Libs hadn't tried to dynamite the left wing. As the eminently sensible Charles Richardson wrote in Crikey recently:

Ted Baillieu has consciously branded himself as a social liberal, and even those who held no brief for the Liberal Party have wished him well in the hope of preserving that strain in the party's heritage.

The last thing the Coalition needs is to be seen as a political force that will happily "stop the boats" but ignore the electorate. As Richardson notes, Baillieu's election shows that ...

... the party has an alternative to the Howard-Abbott model of hard-right populism.

And that's a good thing not just for the party but for our democracy. If only believers in one-winged crash-land politics would understand this.

Irfan Yusuf is a lawyer and author of the comic memoir Once Were Radicals. This article was first published in the Canberra Times on Wednesday 1 December 2010.

I'm sure the Liberals appreciate being lectured to by a revoltingly fat and smelly Pakinigger. How about fixing your sad life and mental illneses before trying to fix the Liberal Party? Alex Hawke and Tony Abbott can at least get out of bed without needing to scoff kebabs and cakes. The best thing you can do for Australia is leave it. There is no need to apologise for being alive. Just get out of Australia and don't come back.