Australian believers of all faiths, and of no faith in particular, read newspapers. However, when newspaper editorialists (and some columnists) try to read believers and their sentiments, they often miss the mark.
Certain columnists and editorialists at The Australian and other metropolitan News Ltd papers have heavily criticised the ABC and Fairfax reporting of sexual abuse allegations against Catholic priests. You can read some of these criticisms at the ABC Media Watch website here. That criticism was repeated again in today’s editorial in The Oz.
The gist has been that widespread reporting of the issue is an affront to World Youth Day pilgrims and ordinary Catholics. The goal seems to be defending the sentiments of ordinary Catholics. The effect is that the editorialists and columnists are patronising Catholic believers. It’s as if Catholics must necessarily be offended by reporting of the misdeeds of Catholic clergy.
On Saturday night, I attended a gathering of Jesuits in Melbourne. These devout Catholics had no hesitation in using the strongest language against the comments of Cardinal Pell and Bishop Fisher about sexual abuse victims. It reminded me of the colourful language many Muslims (including myself) used when Sheik Hilaly was caught out using Ramadan sermons to develop new advertising copy for the cat-food industry.
These Catholics had no hesitation in criticising their religious leaders in the presence of a non-Catholic. They said it was an issue of human rights that affected everyone regardless of faith. Indeed, the Pope himself showed far more leadership and openness on this issue than some News Ltd editorialists.
The concern shown by some News Limited editorialists and columnists for Catholic sentiments wasn’t present when these editorialists commented on another religious leader caught out making disparaging remarks about rape victims. In one edition, The Oz devoted an entire 7 pages of broadsheet copy to Hilaly’s cat-meat comments. Further, editorialists and columnists had no hesitation in casting aspersions on Australian Muslims and indeed Muslims across the world.
Indeed, when yours truly argued in Crikey that The Oz’s Hilaly overkill was only making Hilaly’s position stronger, The Oz ran a highly offensive editorial accusing me of "covering up Islamic outrages", and even suggested I was letting ...

... intolerant attitudes fester in the shadows before exploding and catching Australia unawares, as has happened in countries such as England, Denmark, Spain and The Netherlands.

As if I spent most of my time defending Hilaly.
So on the one hand, editorialists at The Oz and its sister papers think it’s ok to use the insensitive words of a Muslim "cleric" to pillory some 360,000 Australians who tick the "Muslim" box on their census forms. On the other hand, these same writers and editors think Catholics are so over-sensitive that they won’t be able to cope with reporting of sexual abuse by Catholic clergy.
Both are extreme positions, patronising and offensive to believers. The presence of both extremes in the same newspapers takes media hypocrisy to new levels. 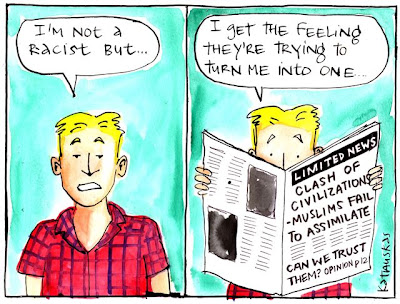 First published in the Crikey daily alert for 24 July 2008.