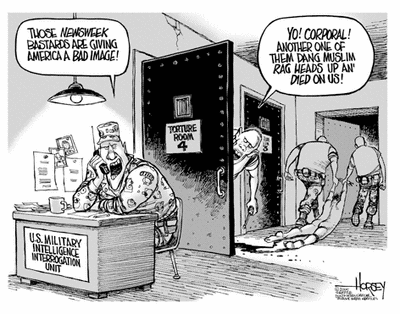 President Barack Obama has many messages to deliver to that nebulous blob called “the Muslim world”. He wanted to move relations between America and 1.2 billion Muslims beyond the kind of stereotypes that dogged his own campaign.

Obama’s recent address to Turkey’s National Assembly was really an address to the governments of Muslim-majority states. He acknowledged “there have been difficulties these last few years … that strain is shared in many places where the Muslim faith is practiced”. He also reminded them that “America's relationship with the Muslim community, the Muslim world, cannot, and will not, just be based upon opposition to terrorism”.

This all sounds lovely. There’s just one problem. America’s unpopular war on terror involved kidnapping and torturing Muslim terror suspects, with few charges laid against anyone. Much of this torture was outsourced to the very governments Obama was addressing in his remarks. Police and intelligence services of countries such as Pakistan, Egypt, Morocco and Syria tortured prisoners and sold their “evidence” to the United States. Governments of these countries allowed the CIA to conduct secret “black site” prisons.

A host of kings, emirs, generals and presidents-for-life of Muslim-majority states used America’s “war on terror” as a convenient excuse to stifle dissent and to suppress their own political opponents. These same governments use religious sentiment to stir up trouble over trivial issues (e.g. the Danish cartoons) to divert attention away from government excess and incompetence. In countries where substantial Muslim minorities existed (such as China, India and the Philippines), fighting “terrorism” was used as a cover to suppress minorities. And not only Muslims suffered. Fighting terrorism has been used as an excuse by the Sri Lankan army to commit atrocities against Tamil civilians.

And now CIA Director Leon Panetta is insisting that ...

... no one who took actions based on legal guidance from the Department of Justice at the time should be investigated, let alone punished.

Then again, a full investigation might just expose the dirty role played by the despots that rule the majority of Muslim countries. It might also expose the role of US allies such as Australia.

There are medical practitioners. And then there are medico-legal mercenaries. I came across a few of the latter during my brief stint as a plaintiff personal injury lawyer. The amount of compensation my punters got was determined by the extent of their impairment. I’d send my clients for an assessment by anyone of my plaintiff specialists, some of whom wrote reports making whiplash look like paraplegia. The insurers would then have the punter assessed by one of their specialists, who usually wrote reports “proving” an actual paraplegic punter could outrun Cathy Freeman. It was all terribly scientific.

Faced with this competing evidence, the judge usually came up with an assessment in line with what the punter’s treating doctor had to say. After all, the treating doctor had a longer history of working with the patient and hence more able to provide a prognosis. Treating doctors generally give more than a rat’s backside for the punter. Why? Well, for starters they have this code of ethics summarised in the Hippocratic Oath. Secondly, they know breaching the oath compromises their indemnity insurance.

None of this seems to have crossed the minds of medical practitioners overseeing detainees in secret CIA “black site” prisons in 3 continents during George W Bush’s so-called “war on terror”. The Washington Post reported these doctors

... committed gross violations of medical ethics and in some cases essentially participated in torture.

A 43-page report by the International Committee of the Red Cross quoted one medical officer even telling an inmate: “I look after your body only because we need you for information”.

Another detainee told ICRC he was made to stand with his arms shackled overhead for a period of 2 to 3 months! Other forms of torture included waterboarding as well as being threatened with sodomy, HIV infection and electric shocks. Believe it or not, the CIA Director Leon Panetta is insisting that “no one who took actions based on legal guidance from the Department of Justice at the time should be investigated, let alone punished”.

Legal guidance? What lawyer would advise doctors to breach fundamental medical ethics? Perhaps the same Defence Department lawyers mentioned in the 2008 book Torture Team: Deception, Cruelty and the Compromise of Law by international lawyer and academic Philippe Sands QC. Those lawyers joined with neo-conservative politicians to produce the 2002 Acton Memo signed by Donald Rumsfeld. The Memo enabled interrogators at Guantanamo Bay (and later at Abu Ghraib) to lawfully commit acts of torture in violation of Article 3 of the Geneva Convention.

And so the US and its allies (including Australia) fought a war to defend our values using methods that threatened our values. Go figure.

Camden xenophobes don't reflect pluralist reality
How's this for road rage. You're driving down Camden Valley Way at about 80km/h after a long day's work. The sun has set. It's dark. Suddenly from the bushes, a tall Middle Eastern-looking bloke emerges, running across the road in front of you. He's wearing long robes and sports curly brown hair with a beard.

You suddenly swerve your car to avoid running him over. You stick your head out the window and scream out blasphemously, "Jesus f---ing Christ!" The man stares at you and implores, "Why are you swearing at me for? I just got run out of town by these strange white-skinned Camden people. I told them I was the Son of Man, come to establish the Kingdom of God. They told me they didn't want me there establishing some sharia state. They wanted to keep their place Christian. They told me to go back to Lakemba where my kind live."

I hope I haven't offended the religious sensibilities of Muslim and Christian readers. Despite some theological differences, both sets of believers look forward to Christ returning to establish peace and justice on Earth. The Quranic Society which wishes to develop its $1.5million parcel of Camden land for a school will hopefully not have to wait so long to see justice handed down by the NSW Land and Environment Court. The society was already expecting a fight with council even before lodging its development application. Members have mortgaged their houses to finance the development. The society's lawyer and consultant, former Sydney lord mayor Jeremy Bingham, boasts of never having lost a case like this.

In the meantime, some Camden residents can feel proud that their antics have placed their suburb on the world map. The Voice of America radio report described opposition to the school as

Neighbouring Campbelltown has a large Muslim community, most of whom are of South African origin. No doubt their relatives will be calling after one South African media outlet reminded readers of two pigs' heads rammed on metal stakes with an Australian flag draped between them at the site. You can imagine the reaction in South Africa when they learn of the involvement of the Australia First Party, one of whose leaders was convicted of a 1989 shotgun attack on the home of a local representative of Nelson Mandela's African National Congress.

The London Independent report carried the headline of

The Macau Daily Times reports Camden and Cronulla together.

In 2005 anti-Muslim sentiment boiled over into ugly riots on the Sydney beach suburb of Cronulla, where rioters targeted people of Middle Eastern appearance. And in 2004, a severed pig's head was similarly impaled in front of a Muslim prayer centre in Sydney's north-west.

Once again, a small number of very loud morons (including people with no links to the Camden community) are ruining Australia's reputation in our region. Their incoherent rants will no doubt make Camden and Sydney a laughing stock. One fellow summed up the stupidity of much of the protest in saying,

My kids can't read Islamic, how are they going to go to that school, it's all crap.

Yes, indeed, it is crap. I can't read Islamic either. And notwithstanding the fact that my religion forbids gambling, I'd be prepared to place money on the fact that if the Prophet Muhammad were not unlettered, even he wouldn't be able to read Islamic. It's easy to laugh at all this, and to write these people off as just irrelevant nutcases, but the fact is that such sentiments are common parlance now.

Even major newspapers print all kinds of imbecilic notions. In October 2006, a national broadsheet newspaper published a story about an alleged honour killing in Brisbane. The report actually manufactured a verse from the Koran which didn't exist. And I've lost count of the number of times I have emailed journalists and columnists to ask for a reference from Islamic scriptures to martyrs receiving 72 virgins.

But whose responsibility is it to dispel such commonly held prejudice? The Rudd Government has announced that it will conduct anti-racism programs, but the real responsibility lies with Muslim religious leadership which should be spending time and resources on educating the broader community about Australia's Muslims and their heritage.

So what is Australia's peak Muslim body, the Australian Federation of Islamic Councils, spending its resources on? After a disputed meeting, various factions of the federation went to the NSW Supreme Court. A receiver has been appointed for at least the second time.

Still, at least my colleagues in the legal profession are getting something out of this internecine warfare. The federation, a body dominated by middle-aged men with poor English skills, doesn't reflect Muslim Australians, the largest bloc of whom are Australian-born, English-speaking and aged under 40. And the xenophobes of Camden don't reflect the reality of pluralist Australia.

With the majority locked out of discussion on the Camden school project, it's little wonder the debate has been hijacked by extremists.

Irfan Yusuf is a Sydney lawyer. This article was first published in the Canberra Times on 30 May 2008.