The amazing Kate Ceberano has a new album entitled so much beauty. She is an amazing live performer. For what it's worth, I last saw Kate perform last year at the Sydney Jazz Festival before a large crowd at Darling Harbour.

Click the arrow to watch her do wonders with this old track.

The Kiwis have suddenly discovered Camden. Either that, or they've had far more important things to read and write about. This rather blasphemous piece has just made an appearance in the New Zealand Herald. 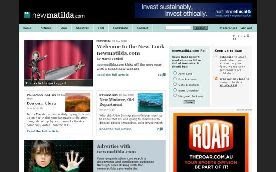 Meanwhile, the wonderful folks at NewMatilda have allowed yours truly to cut loose on iguanas and other political animals here.

And if you've got 15 minutes to spare, watch this special on Wazzi Acrim's career. Marvellous stuff.

Check out this pair of hot sexy kiwi rockers.

No, I’m not talking about anyone on Dr Brendan Nelson’s side of Parliament. Nor a genuine conservative like former PM Malcolm Fraser. I’m talking about David Davis, the Member for Howden and Haltemprice in the House of Commons and the Shadow Home Secretary. You can watch him explaining his reasons here.

The Brits are fiercely divided over whether to extend the period of preventative detention from 28 to 42 days. PM Gordon Brown and Home Secretary Jacqui Smith have argued that a longer period is needed given the complexity of such cases. Similar arguments were used by our own politicians and by the Federal Police in relation to the extended detention of Dr Mohamed Haneef.

They might have a point, especially with UK public servants dropping sensitive intelligence briefings on al-Qaeda on London trains. As the Independent editorialised yesterday:

A more perfect illustration of this administration's ineffective authoritarian tendencies could scarcely be imagined.

The proposals were narrowly passed through the House of Commons (with a majority of just 9 votes) on Wednesday. They include an ex gratia payment to anyone whose detention beyond 28 days is found by a court to be unjustified. That’s real consolation for someone who loses his or her job because of detention and cannot afford a lawyer to go to court and obtain the necessary orders.

Opponents of the proposal include the Director of Public Prosecutions, Sir Ken McDonald QC. You can hardly blame him given that his staff might find themselves arguing these matters in court. Then again, McDonald has been cautious about such anti-terror laws in the past. On those occasions, McDonald referred to past experiences with the wrongful detention of suspected IRA terrorists, including the Birmingham Six and the Guildford Four.

It’s hard to run through the complexity of British anti-terror laws in this short piece. But as The Economist points out, Britain already had “the most generous pre-charge detention limit in the world” even before the 42-day period was passed. The Poms should be alert and alarmed.

First published in the Crikey daily alert for Friday 13 June 2008.