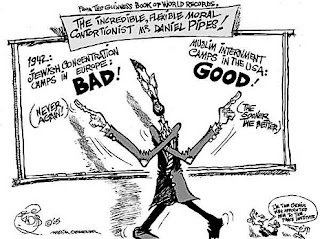 I spent Christmas Eve sitting with my Jewish friend singing carols and enjoying world-class church music at St Mary's Cathedral in Sydney. We were surrounded by Catholics of all nationalities. Could this spectacle happen only in Australia? Who knows.

Around the same time, halfway across the world (and a virtual universe away from where most people sit in cyberspace), editors of the far-right blog FrontPageMagazine.com were busy uploading the latest polemic from American cultural jihadist Daniel Pipes. And what was the topic of Pipes's pre-Christmas message? Peace on earth and goodwill to all men and women? Something to bring Jews, Christians and Muslims together?

Nope. It was a partisan and sectarian rant answering the question: "Was Barack Obama a Muslim?"

Article VI, Clause 3 of the US Constitution clearly states the intention of the Founding Fathers that

But Pipes and others from America's lunar-right have been suggesting that Obama's nominally Muslim heritage will make him unelectable. Pipes spends his entire article exploring whether Obama was a Muslim who apostatised, even claiming that mainstream American Muslims would be angry at Obama for his alleged apostasy.

I'd love to have the luxury of sitting back and scoffing: only in America. The sad reality is that this kind of nonsensical analysis is being used more frequently and to greater effect.

But do cultural warriors and war-mongers only exist in that allegedly uniform sector of humanity we call the West? This question has been authoritatively answered by British journalist and author Jason Burke. Few people have travelled through as many trouble spots in the nominally Islamic world over the past 15 years as this senior reporter for The Observer.

In his most recent book On The Road To Kandahar: Travels Through Conflict In The Islamic World, Burke sees a lot in common between the likes of al- Qaeda and America's allegedly conservative cultural jihadists.

In the West, newspaper columnists talk about the Islamic world as a monolith. Muslim conservatives make similar statements about the American-led West. There is talk of the Arab or the Islamic mindset on one side, Western, Christian or Jewish mind on the other. American senators talk of bombing Mecca as a reprisal for attacks on the United States, while in Saudi Arabia and elsewhere radicals talk of bombing America as a reprisal for attacks in Palestine, Chechnya, Kashmir, Iraq and Afghanistan.

... a discrete religiously defined group and that they are engaged in a last-ditch, no- holds-barred battle against a fanatical and irrational enemy that is aggressive, belligerent and intent on expansion until all alternative cultures, societies and belief systems are eradicated.

He concludes that the rhetoric of cultural (and, indeed, military) jihad on both sides deploys

... spurious historical and cultural references to justify what are fundamentally prejudiced and ignorant views, and all twist actuality to fit their ideas.

As time goes by, the loudest voices from both camps are the most extreme. Caught in the middle are the vast majority of people, who just want to get on with their lives and who are quite happy to live with people who don't share their culture or religion.

Still, the neocons did get one thing right: the Western policy of sponsoring allegedly moderate despots to rule Muslim-majority states will backfire as it has in the past. What they got wrong was the idea that the only way to convince Muslims to adopt Western-style liberal democracy was to bomb them into the Stone Age.

When one looks at the Muslim regimes and leaders deemed acceptable to Western interests, one can immediately recognise why so many in the Muslim world are resentful. The tsunami of often absurd eulogies that followed the assassination of former Pakistani prime minister Benazir Bhutto is a case in point.

Writing in the Wall Street Journal, Bernard Henri-Levy speaks of

... a beautiful woman. A visible, indeed a conspicuously, spectacularly visible woman ... with her face uncovered, unveiled.

Is Levy for real? Does he seriously believe that the most suitable woman to rule a Muslim- majority state is one who makes his imagination run wild? Would he write such words about a female Western leader, say Margaret Thatcher?

And now the largest political party in Pakistan is led by a 19-year-old who doesn't speak a single Pakistani dialect and who seems to be more popular among female Facebook fans than Pakistani voters.

During a recent visit to France to sign a nuclear energy agreement, recently rehabilitated Libyan leader Colonel Gaddafi was quoted as making this request of his hosts:

I want my tent to be erected near Elysee Palace. I want to meet 200 attractive French women there.

If this is the calibre of secular leadership the West expects the citizens of Muslim-majority states to put up with, is it any wonder so many are prepared to do the unthinkable and give religious parties a try?

If the West can do anything constructive, it is to encourage those Muslim communities tempted to flirt with Islamist politics to choose the kind of Islamists chosen by Turkish voters. They aren't really Islamists at all, but rather cultural conservatives who want their nation to return to its Muslim heritage in the same manner that Western conservatives speak of their own societies' Judeo- Christian heritage.

And what sensible people from all sides can do is marginalise the loud- mouthed cultural warriors whose conspiratorial world view is conspiring to destroy us all.

Irfan Yusuf is associate editor of AltMuslim.com and received the 2007 Allen & Unwin Iremonger award for writing on public issues. This article was first published in the Canberra Times on 8 January 2008.