OPINION: Too alarmed to be alert ...

Some reporters need a lesson from police and intelligence agencies about Muslim extremists, IRFAN YUSUF writes.

Let's not live in denial. A small number of Australians of Muslim faith and/or heritage believe they must attack Australian (and broader Western) interests. If UK experience is any indication, many are young 2nd and 3rd generation migrants, and the rest converts.

This hasn't always been the case. Concern about domestic or "home-grown" terrorism became particular acute since the London bombings on July 7 2005. Within weeks of the bombings, investigative journalist Brian Toohey wrote in the Weekend Financial Review that ASIO's budget for Muslim community informants had blown out, with much information deemed useless. Former ASIS chief Allan Taylor was called in “to crack down on the amount of money wasted by ASIO on agents receiving payment for concocted information”.

... many part-time agents in Australia ’s Islamic community were being paid for information that had not been properly evaluated.

The intelligence community soon learned what Muslims took for granted:

Australia ’s Islamic community is riven by religious, political and personal rivalries, which often prompt informers to take advantage of ASIO’s cash to make up damaging accusations against their opponents.

This simple fact underlies not just the work of seasoned law enforcement and intelligence professionals who show extreme caution to ensure they only act on the basis of accurate information stripped bare of sectarian and ethnic bias, ensuring their processes are driven less by ideology and more by objective assessment of exactly where threats exist.

Sadly, our cultural warriors in media and politics aren't always driven by such caution. We are taught to be alert but not alarmed. But some Muslim-baiting media outlets incite so much sectarian hysteria that we are left too alarmed to be alart.

Recent reports in one newspaper in particular have bordered on the fanciful. Last week the paper declared all Australian Muslims supported the Lebanese Shia Muslim party Hezbollah and opposed Israel. I’ve never been to Lebanon. Most of my Lebanese friends are either Sunni Muslims or Christians. Most of my Shia Muslim friends fled Afghanistan and Iran to escape theocratic regimes. Hardly people who’d support a theocratic party.

My migrant mother’s first Australian friend was Jewish. When I was young, my family used to buy our Indian spices from a Bondi spice shop owned by a Jewish family. My colleagues and friends include Jews, most of them avid supporters of Israel.

Before reading the article, I’d never even heard of the Shia Muslim gentleman. I knew of the Lebanese Muslim spokesman as a former President of an ethno-religious organisation in Lakemba which barred full membership to all women and to men ineligible for Lebanese citizenship. Yet the national broadsheet attributes the opinions of these religious figures to 300,000 Australians who tick the "Muslim" box on their census forms. This same newspaper's editorials consistently patronises Muslims for allegedly not embracing democracy and gender equality!

Within 24 hours of the latest terror scares in London and Glasgow, the paper has a front page report alleging some 2-3,000 "ideological sleeper cells" existed in Sydney ready to be "radicalised" into committing terrorist acts. The reported relied on "research" of one Mr Mustapha Kara-Ali of Sydney, giving credence to his sensational comments by claiming he was “given a $200,000 granting by the Department of Immigration and Citizenship in June last year to investigate the radicalisation of young Muslims in Sydney 's southwest”.

This must have been news to DIAC officers overseeing the National Action Plan. The DIAC website shows Kara-Ali hadn't received a single cent. Indeed, the grant of just over $150,000 was given to al-Amana College , an independent school managed by one of at least three rival Lebanese Sunni Muslim sects. Kara-Ali's role is allegedly to act as "project manager".

You'd expect research about trends in Muslim youth radicalism be managed by someone with qualifications in sociology, demography and/or anthropology. Kara-Ali holds no such qualifications. His research methodology consisted of focus groups and discussions with 200 young Muslims and a number of imams. How were these people chosen? Which ethnic, sectarian or other backgrounds were these people from? From which parts of Australia? With such shoddy research methodologies being used at taxpayer expense, it's little wonder Federal Police Commissioner Mick Keelty immediately rejected Kara-Ali's claims.

Finally, Brian Toohey's words cited above should be heeded by journalists as much as by law enforcement and counter-terrorism professionals. Within Sydney's Lebanese Sunni Muslim community, a sectarian turf war is being waged between the Lebanese "al-Ahbash" sect (to which Kara-Ali belongs) and other Sunni sects. Each sect uses every opportunity to paint their opponents within the Lebanese Sunni community as terrorists or "Wahhabists".

Which Lebanese sect is truly radical? For Muslim outsiders like myself, they're all as bad as each other. Al-Ahbash spokespersons were gleeful when a handful of young Lebanese Australian men from a competing sect were recently rounded up by Lebanese police. Their sectarian opponents speak with glee of senior al-Ahbash leaders about to be tried for alleged involvement in the assassination of former Lebanese Prime Minister Rafik Hariri.

Meanwhile, the self-serving polemical rants of one Lebanese sect against another are made front page news in the national broadsheet!

Intelligence and law enforcement professionals are alert. Government wants us to be alert but not alarmed. Yet some media outlets make it their business to make us all very alarmed without themselves being too alert with facts and logic.

The author is a Sydney lawyer and runs a co-convenes a course on Understanding Australia's Muslim Communities for the Australian Homeland Security research Centre. The views expressed here are those of the author and not of the Centre.

A slightly edited version of this article was first published in The Canberra Times on Thursday 5 July 2007.

Marriage in a nutshell ...

The following illustration provides a much-needed reminder to bachelors (like myself) of the risks of entering holy matrimony ... 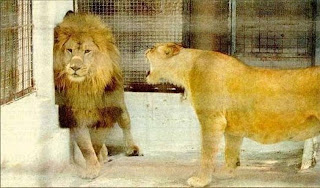 (Thanks to AD of Christchurch)