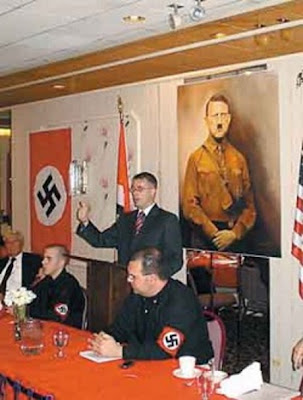 The Abu Hamza pseudo-controversy has provided the nazified imbeciles congregating around the News Limited blob ... woops ... blog of Tim Blair with further inspiration for laughably inane comment. Here are some excerpts. Try not to laugh too hard.

Barak Obama eating a hamburger (not a Sea Kitten, note) prepared by the wife of a Muslim cleric - in an unforgivable affront to the Jewish and Christian faiths! No! Just the Jewish one. Wait! Which one doesn’t eat ham again? Oh yeah, the Muslims.
bill of sydney
Fri 23 Jan 09 (05:28am)

What the ...? And for all you interfaith buffs, shove this up your halal/kosher ham sandwich!

Just ONE of the religious obligations MoHAMmed stole from the Jews to try to convert them to Islam.

Don’t you know anything?

But this isn't just about religion. It's also about colour. People with white skin clearly have more conscience ...

Speaking of contex, in the video of the audience there are many ‘non-Anglo’ faces. They all look expressionless as they listen to the hateful Imam - apparently drinking in the message obediently.
But there is one ‘Anglo’ and he has a smirk [of embarrassment?] on his face. He seems to be half looking to see how he should react to the teaching to beat his wife.
Which of these reactions shows assimilation to the Australian culture?
Barrie (Reply)
Fri 23 Jan 09 (08:33am)

Moving onto page 2, some people are wondering why conservatives aren't stupid enough to buy into this tabloid tripe ...

Where are our cultural commentators, Greer of the Long Face and John Pilchard, on this; and, more importantly, where is Malcolm Turnbull, every conservative think tank spokesman and people elected by half of Australian voters to speak stridently against those things that are inimical to our way of life?
Mick Gold Coast QLD of Gold Coast QLD (Reply)
Fri 23 Jan 09 (09:07am)

Even after someone pointed out that even Muslims have actively condemned any hint of condoning domestic violence, the usual cultural nuance and sophistication returns ...

The mere fact that the video is 4-5 years old, and yet they still broadcasted it - knowing full well the filth that was contained on it, and the likely reaction by the public - means that the Muslims who produced it deserve every bit of the condemnation that rightly flows their way.

I’d like to think - and certainly hope - that this line of thinking is, in fact, limited to a bunch of fringe crazies within the Muslim religion, but there appears to be very little objective evidence that that is the case.

Meanwhile, it's time to bring in extraneous leftwing ideas like human rights ...

So according to this Muslim cleric it’s OK for Muslim men to beat their wives so long as they don’t draw blood or create bruises.

Then how come other Muslims complain that terrorist suspects were tortured at Guantanamo Bay ? Surely it’s not torture ? Surely it’s just a bit of harmless wife-beating ?

I look forward to comments from "Augustus", "tim blair" and the anonymous chap from Normanhurst to this post. Enjoy!