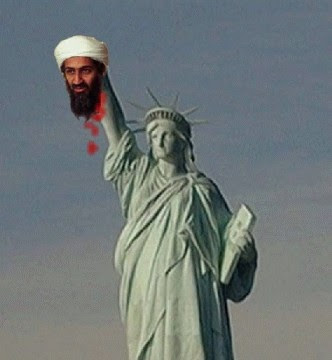 For those of you worried about their superannuation savings being fritted away thanks to the near-collapse of Freddie Mae (or should that be Fanny Mac?), their insurance premiums going up thanks to AIG going broke or their jobs being lost thanks to a general economic downturn, all this really should be the least of your worries. The biggest worry is that Osama bin Laden and his minions could be running Wall Street soon. 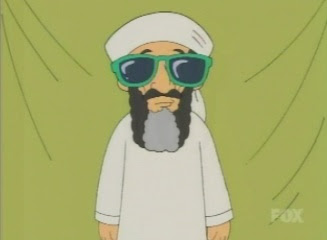 Writing in The Washington Times, a newspaper whose owner is completely unrelated to any form of religious fundamentalism, Frank Gaffney warns of the dangers of financial products and instruments that comply with Muslim sacred law. Soon, we could be seeing the spread of sharia for complete bankers.

Gaffney fears that the impending crisis on Wall Street could lead to...

... the infusion of vast quantities of petrodollars, primarily from the Organization of Petroleum Exporting Countries’ Saudi Arabia and other Islamist nations in the Persian Gulf.

... promote Shariah-Compliant Finance and the seditious theo-political agenda it serves.

Of course, the owners of The Washington Times have never served any theo-political agenda.

Before you know it, nasty beady-eyed Saudi wahhabist ayatollahs will be taking over the US economy, perhaps in the same manner as they took over Griffith University and News Corporation.

And what is this Sharia-compliant financing all about? Basically it’s about providing credit without charging riba (an Arabic word which means usury). And does riba include interest charged by conventional financial institutions? Are Muslims religiously prohibited from taking out mortgages? Well, it depends on who you talk to.

But so-called sharia-compliant finance also influences how funds managers invest. Or rather, what kinds of companies they invest in. Hence, sharia-compliant funds won’t invest in gambling or p-rnography. This may not be your cup of tea, especially if your surname is Packer or Heffner. But seriously, how does this stuff differ with any other form of ethical investment?

In fact, sharia-compliant financing is such a huge threat to Western civilisation that mainstream banks like Citibank and HSBC are leading the crusade to stop the spread of this dangerous creature.

Gaffney heads the Centre for Security Policy, a group so committed to national security that it awarded its Keeper Of The Flame Award to such peacemakers as Donald Rumsfeld and Paul Wolfowitz.

Yep, in the fantasy world of Rev Moon’s conservatives, interest-free finance is almost as dangerous as free s-x.

Disclosure: The writer is paying off a very sharia-uncompliant mortgage.

First published in the Crikey daily alert for 17 September 2008.

Email ThisBlogThis!Share to TwitterShare to FacebookShare to Pinterest
Labels: Crikey, politics, sharia, US 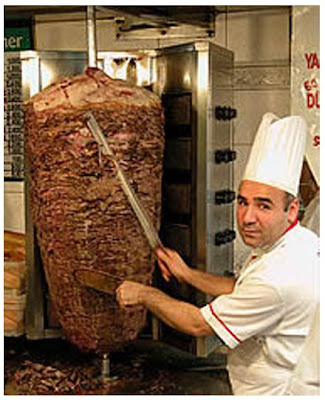 Local government elections have just been concluded across New South Wales. There have been no clear winners, with the ALP obvious losers in most areas. Minor parties and independents have also done well. This was largely an election about local and state issues.

But according to one candidate for the Greens, this election was also about the leadership of his local mosque flouting secular traditions and allowing one candidate to address its congregation after Friday prayers.

Kuranda Seyfi Seyit, chair of an organisation calling itself the “Forum of Australia’s Islamic Relations”, has spat the dummy after he was out-polled by community independent Izzet Anmak in the elections for one of two wards in Auburn Council. Seyit has approached ABC and claimed that Anmak was endorsed by the executive committee of the Auburn Gallipoli Mosque to run as their candidate, allowing him the opportunity to speak at the mosque on the Friday before the elections.

Mr Seyit is quoted by ABC as alleging that Australian Turks have a proud secular tradition, the obvious implication being that the mosque and/or Anmak were part of a plot to introduce political Islam into local government.

This is a serious charge to make against a mainstream religious institution that has in the past allowed candidates of all major parties to visit the mosque and address parishioners during local, state and federal elections. Past speakers and visitors have included former Mayor Le Lam and State ALP Member Barbara Perry.

Mr Seyit was endorsed by the Greens, a party whose leaders have spoken out against stereotyping of Muslims and other racial and religious minorities. The Greens have supported the cause of asylum seekers and have opposed anti-terrorism laws on the basis that these have been passed in an environment of hysteria.

Now, one of their candidates is generating hysteria, accusing a Turkish religious institution of attempting to influence a council election.

The imbecilic nature of Mr Seyit’s allegations is obvious. On the one hand, he states that Australian Turks are proud of their secular nature. Turkish secularism places strong emphasis on separating mosque from state. If Aussie Turks shared this passion, surely one would have expected any attempt by the Gallipoli Mosque executive to support a candidate to backfire. Surely any attempt by the mosque to support Mr Anmak would have worked against him.

Mr Seyit’s outburst isn’t without its unintended humour. In a recent e-mail sent out to a Muslim yahoogroup, Mr Seyit stated the real reasons for his anger at the mosque executive.

Politics in the mosque should not be tolerated. Not because I am secular … The mosque cannot take sides. when the Mosque allowed Izzet to make a speech to the congregation it really hurt me as that mosque is something that my father worked towards building. My father was sent to Turkey in 1982 by the mosque building committee to raise funds. My father used to teach Quran courses there and we were all a part of the mosque's history. In fact my father was the first Turkish man in Australia to lead the Eid prayer in a small house in Redfern in 1970.

By his own admission, Mr Seyit is no great lover of secularism. His main concern is to benefit from mosque resources he believes he is entitled to because of his father’s efforts.

In the same e-mail, Mr Seyit makes this extraordinary claim:

Now we await the result and although prior to running I had done the calculations I knew that I would get in without difficulty. Instead, as it stands many of my votes went to Izzet and there is a very high chance that both of us will miss out. I was invited to run by former councillors and that is why I ran, I was assured of their support and knew that I would get the majority of the "Muslim" vote in ward one.

Mr Seyit also argues in his e-mail that there was a kebab konspiracy involved, with kebab manufacturers plotting against him:

The owwner of the Ozlem Kebabs told me that they wanted to run their own man … and that is why they did not endorse me. They used the every trick in the book to get votes from the Turkish community, with a bottomless pit of money, they placed pressure on most of the kebab shops to vote for their man, they convinced the ALL the Turkish Newspapers to promote their man (because Ozlem and the kebabs are all big advertisers) , they ran large ads every week, and they worked on each every Turkish organisation and soccer club, first and foremost they had the support of the Gallipoli Mosque and the president campaigned hard for their man.

Clearly this was a foul-smelling kebab konspiracy, filled with extra garlic sauce. Both Mr Seyit’s ego and his political career seem to have died with a felafel in his hand.

UPDATE I: Writing to the same yahoogroup referred to above, a certain Gazza, who admits to being an ALP member and addict of non-alcoholic beer, has made the following important observations ...

I have read the to and fro of messages about Seyfi’s unfortunate loss in the Auburn council elections and am disappointed in the sniping and backbiting that has resulted. All this serves to demonstrate just how nasty politics can get ...

Lets all take a Valium and go to sleep till the next election.

My response to Gazza is this - I'll be happy to bring the Bavaria if you supply the valiums!