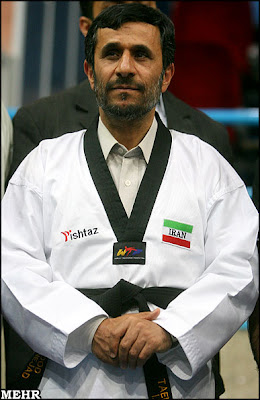 Recent comments made by the President of the Islamic Republic of Iran have drawn international condemnation. President Mahmoud Ahmedinejad’s call for Israel to be “wiped off the map” included a condemnation of Muslim nations who choose to recognise Israel.

The Iranian leader’s claims have been made in the context of supporting the struggle for a Palestinian state and for the restoration of Palestinian rights. He described the Palestinian struggle as being part of an “historic war between the oppressor and the world of Islam”.

Mr Ahmedinejad’s calls represent a return to Iran’s old policy of drumming up popular hysteria with a view to exporting its “Revolutionary Islam” to different parts of the world. But how real are these sentiments on the ground? Is Israel the enemy of Islam itself? And what right does the Iranian president have to speak for Islam?

Iran is a majority Shia country. Shi’ism is one of 3 major sects of Islam. The other 2 sects are the mainstream Sunni and the more modern Wahhabi sect. Shia Muslims make up some 10% of the Muslim world. Shia majorities exist in Iran, Iraq, Azerbaijan and some Gulf states. There are also substantial Shia majorities in Pakistan, Saudi Arabia and Lebanon.

The Shia sect insists political leadership of the Muslim community must remain in the hands of the Prophet Muhammad’s household, including their descendants. Shia Muslims regard the first 12 male successors of the Prophet (also known as “the 12 imams”) as being infallible.

Sunni Muslims reject the infallibility of the 12 imams, but place enormous importance on all the Prophet’s descendants. Sunni Muslims do not insist that political leadership must remain in the hands of the imams or their descendants.

Wahhabi concepts of political leadership were previously tied to the Saudi Royal Family. With the split in Wahhabi ranks and the formation of Usama bin Ladin’s al-Qaida movement, many Wahhabis no longer regard the Saudi family as a legitimate source of international Muslim leadership.

Sunnis make up at least 85% of the Muslim world. Comments of the Iranian leader do not bind Sunni Muslims, and Mr Ahmedinejad’s standing as a Shia scholar is not strong enough for his views to bind Shia Muslims.

Yet apart from theological considerations, the Iranian leader’s comments on Israel do little to progress the Palestinian cause. Since the late Palestinian and Israeli leaders Arafat and Rabin shook hands on the White House law, Palestinian leadership has consistently rejected the idea that Palestinian statehood necessarily involves destruction of the Jewish state.

Further, Turkey’s more conservative Islamist government sees no reason to reverse its stance of continuing friendly relations with Israel. In recent times, Turkey’s Islamists have sponsored talks between the Foreign Ministers of Israel and Pakistan.

Many Muslim voices seeking the destruction of Israel use historical figures such as the Kurdish general Salahuddin Ayyubi (known in Europe as Saladdin) who defeated the Crusaders and liberated Jerusalem. Yet even Saladdin recognised the Crusader Kingdoms and sent emissaries and ambassadors to these kingdoms. Perhaps if Saladdin were alive today, he would have recognised Israel even if engaged in military conflict with the Jewish state.

The brilliance of Saladdin’s campaign against the Crusaders lay not just in his military tactics. Saladdin was a brilliant negotiator with moderate views who sought to avoid war at all costs. Further, Saladdin made regular overtures to his enemies, and insisted that his troops obey the rules of law as outlined in the customary international law of the region at that time.

Saladdin is not the most popular figure in Shia circles. Prior to attacking the crusader kingdoms, Saladdin single-handedly destroyed the Fatimid Empire in Egypt. The Fatimids were the most powerful Shia empire of the time, and were accused by Saladdin of providing assistance and intelligence to the Crusader kingdoms.

Saladdin did not see the task of liberating Jerusalem in purely Muslim terms. Further, it was not a battle against all Jews or all Christians. Indeed, Saladdin appointed the prominent Spanish Jewish physician and rabbinical scholar Shaykh Musa bin Maymun al-Qurtubi (Moses Maimonides) as the chief medical officer of his army.

Saladdin’s good sense and moderation yielded results. He was able to liberate Jerusalem within his lifetime, and showed magnanimity to his defeated opponents. Both Christian and Muslim historians record that when the Crusaders conquered Jerusalem, they entered the main Mosque and Synagogue with civilian blood upto their knees. When Saladdin achieved victory, there were few civilian casualties.

The Iranian President’s comments are more reminiscent of Crusader barbarism and ignorance than the moderation and tolerance of the great Saladdin. If Muslim nations follow the Iranian formula in their dealings with Israel, they will go down the same path of destruction as the medieval Frankish hordes that invaded the Holy Land.

(The author is a Sydney-based lawyer and occasional lecturer in the School of Politics at Macquarie University.)