For centuries, the warrior-state of Rajasthan successfully resisted the rule of my ancestors, the Mughal kings. Rajasthani’s were fearsome fighters, a proud people who even taught their females to fight, something unknown among Indians.

Rajasthan batted second, chasing a total of 163. They needed a run-rate of over 8 per over. In 1-day cricket terms, a run rate of 6 per over would be deemed near impossible. But in twenty-20 cricket, such high run rates are quite normal.

Ironically, the winning runs were hit by Sohail Tanveer, who at international level plays for India ’s arch cricketing rival Pakistan . Rajasthan’s captain, our very own legend Shane Warne, was also batting at the time.

Warnie will get to hold up the diamond-and-ruby-studded IPL trophy. As Rajasthan’s captain, Warne has now become an Indian hero. No doubt Bollywood will make him a few movie offers. I can imagine him performing some hot Bollywood dance moves or punching villains despite his swinging fist being 1 metre or so away from anyone’s face.

I predict Twenty-20 will have an impact on the 1-day game. Batsmen will be less reluctant to hit sixes. Batting teams will score runs much faster. A final score of 350 for the side opening the batting will often no longer be a winning score.

Will English county cricket teams still attract top overseas players? I doubt it. The IPL tournament will become the tournament of choice for players seeking overseas experience and a fast buck. Alleged monkey Andrew Symonds managed to pick up a cool $1.47 million. No doubt he’ll feel like the monkey-god with that sort of money. And I’d happily change my surname to Pathan if it meant securing US$925,000 from the Kings XI Punjab financiers.

In other cricketing news, rumour has it that the Aussies are playing the West Indies in a test series …

This sounds like good fun. My bet is it'll be better than watching a boxing match between Abbott and Manne. 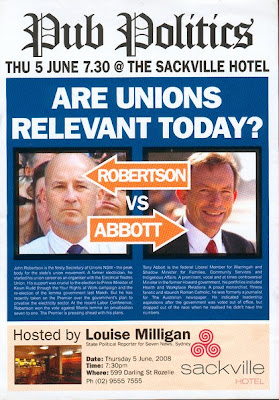