How Aussie comedians made a joke of APEC security 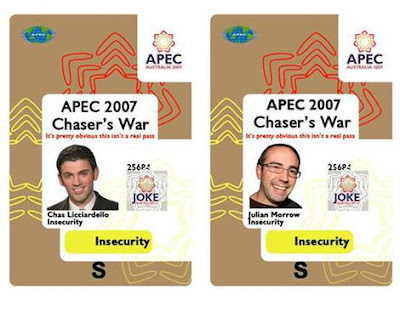 Comedy has the power to transcend all kinds of social and political boundaries to make a point. By disarming their audience, comedians can expose the double standards and inconsistencies that accompany so many of our prejudices. Comedians get away with just about anything.

The dudes from The Chaser proved this yesterday when they inadvertently entered the no-go zone armed with their "insecurity" badges. Police only suspected something was amiss when a man wearing a shalwar kameez (traditional Afghan and Pakistani dress consisting of baggy pants covered with a long shirt), a Pushtun cap and sporting a long beard emerged from a limousine in this "official" Canadian motorcade.

Yep, it was Chas Licciardello dressed as Osama bin Ladin living in Canada. Or something like that. I guess we might find out on next week’s episode. This isn't the first time The Chaser has shown up the inconsistencies that racial stereotypes and profiling create.

Remember when they showed an American tourist filming the Harbour Bridge? He kept filming to his heart’s content with not a single security guard in sight. But when some dude wearing a Palestinian Kafiyyeh does it, security is onto him straight away. The same story was then repeated at the Lucas Heights nuclear facility.

What these comic sketches prove is how easy it is for non-stereotypical looking persons to break through even the toughest and most intimidating security barrier. This means even the tallest fences are useless if front line officers on the ground haven't been trained properly.

It also means that the linking of terrorism with persons of certain backgrounds or appearances just doesn't work.

Racial profiling is stupid. Let's look at Australians convicted of terrorism offences thus far – Roche, Hicks etc. How many sported long beards and wore pushtun caps? Of course, I’d sound like a broken record pointing this out in a letter to the editor or an op-ed. The Gerard Hendersons and Piersed Akumens of this world would accuse me of being part of some civil libertarian conspiracy. Far-right bloggers will accuse me of suggesting we go soft on "Islamic terrorists".

Sometimes, only comedy is sharp enough to ram home the simplest message whose common sense is so often shrouded in hysteria and prejudice. With that in mind, I’d be happy to represent The Chaser gang.

And I wouldn’t charge them a cent. Their good-natured humour is priceless!
First published in the Crikey! daily alert for Friday 7 September 2007.
© Irfan Yusuf 2007
Posted by Irf at 10:11 pm No comments: