MEDIA: Movement at the station as shock jock pushes boundaries 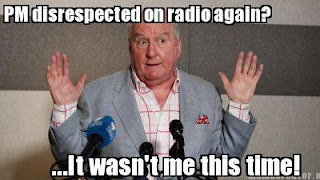 
Here’s a short course on court procedure. A lawyer stands at the bar table of the ACT Magistrate’s Court to cross examine the accused.

"Mr Mathieson, I understand you are a homosexual, is that correct?"

The accused is perturbed.

The Magistrate also expresses her surprise.

“Mr Yusuf, what is the relevance of this line of questioning? Mr Mathieson is merely appealing a traffic fine.” The lawyer continues in a loud bombastic voice.
"I put it to you, Mr Mathieson, that you must be a homosexual. You are, after all, a qualified hairdresser, are you not?"

Would the magistrate bring a stop to such irrelevant questioning? And how would the lawyer’s colleagues and others present in the court room respond? And if the lawyer were referred to the Law Society’s disciplinary panel, what possible explanation could he have for inserting questions of sexuality in a case about someone parking a car for 31 minutes in a 30 minute zone while going to get a haircut?

It all sounds like a draft skit rejected by the writers of Monty Python. We don't tolerate this kind of pseudo-comedic "logic" in the real world of workplaces, courtrooms, offices, universities, hospitals etc. So why do we have to put up with it being repeatedly played out on the airwaves?


Only the most crude and infantile listeners would have been amused by Perth shock jock Howard Sattler’s recent line of questioning to the Prime Minister about the sexuality of her partner of 7 years. And his “logic” in pursuing this line of questioning? Apparently there were plenty of “myths, rumours, snide jokes and innuendo". Yes, there were plenty of jokes and innuendo in the four part ABC series At Home With Julia which starred Phil Lloyd (aka Miles Barlow) as the PM’s partner.
In one memorable scene of the show, the PM and her prince were seen recuperating after a horizontal folk dance under the Australian flag on the floor of her Parliament House office. And the recurring theme of the show is of Mr Mathieson constantly trying to find excuses to ask his princess to become his bride.
Marriage equality isn’t on the cards, so there’s certainly nothing camp about a marriage proposal.

(Perhaps the show’s writers should have included the character of a Perth shock jock continuing to insist: “But you're in a heterosexual relationship? That's all I'm asking.”)

And Kate Legge’s profile in The Weekend Australian on 9 March 2013 didn’t exactly paint the stereotypical picture of a fan of The Village People. Our First Bloke, the man Prince Charles refers to as “Denis” (after the late husband of the late Mrs Thatcher), is about as cricket crazy as John Howard.

Legge writes: “His registry since 2009 reads like a sports junkie's almanac. He's present at almost every major event on the Australian calendar: Formula 1 Grand Prix; Derby Day; Oaks Day; Twenty20 games; Test Matches; the Australian Open; State of Origin; the Bradman Oration; Sports Australia Hall of Fame dinner; final series for AFL and NRL”. Not the sort of bloke we’d have called a poofta in the playground in the 1980’s.

But this isn’t enough for Sattler, who continues: “But you hear it. He must be gay … You've heard it. It's not me saying it, it's what people…”

On this basis I wonder if Mr Sattler would ask one of his colleagues, say Sydney’s Alan Jones, if he was gay? Would Jones tolerate it? Should he?

And now the Americans, the British and even our Kiwi cousins are having a laugh at our expense. Sattler’s remarks have made international headlines. Britain's Daily Mail, The Guardian and The Huffington Post are all having a good laugh at our expense. Which shouldn’t come as a surprise. After all, how often do we chuckle at the Americans when we read some of their allegedly respected commentators spreading rumours that President Obama might be a Muslim named “Barry” who doesn’t have an American birth certificate? (True, such lunacy doesn’t stop these commentators being invited to the podiums of our most prominent think tanks). The more highbrow among us love citing the likes of shock jock Rush Limbaugh and Glenn Beck.
Other shock jocks have attacked Sattler’s offensive questioning. But that hasn’t stopped them from from showing little respect for common standards of decency in the past. Derryn Hinch and Ray Hadley are hardly names synonymous with quality journalism.

I'm all for free speech. But people like Sattler gone free speech a bad name. That might explain why his employers have acted before their own names are dragged through the mud. But advertisers also need to be vigilant also. And consumers and pressure groups need to withdraw support for advertisers who continue to fund public offence.

The fact is that the internet age is fast making the era of shock jockery redundant. In Canberra, 2CC can only dream of having the ratings of ABC Local Radio 666. In regional areas, the government broadcaster is king. Surely radio listeners deserve better than hearing smut and innuendo passed on as journalism.

Irfan Yusuf is a Sydney lawyer and author. This was first published in the Canberra Times on Saturday 15 June 2013.