EVENT: These guys are scary ...

For more details, click here.
Posted by Irf at 7:54 pm No comments: 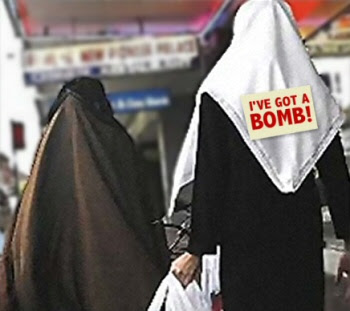 A little birdie recently told me you have started a new website called “Islamist Watch”. I’m so glad you have enough time on your hands to start all these wacky websites (such as Campus-Watch) extending your crazy witch hunt of all those less obscenely right wing than yourself.

I was hoping you would add me to your list of “Islamists”. Seriously, having someone like yourself labelling me an “Islamist” or an “extremist” would add so much to my credibility.

What is required to become an Islamist in your books? Having followed your work over the years, it seems to me that the criteria relevant to becoming an Islamist are:

a. Refusal to abandon my faith;
b. Insisting on being treated equally and fairly in accordance with the rights granted to me by the country where I live;
c. Using existing legal and institutional means to seek those rights; and
d. Regarding you and your ilk as a threat to civilisation as we know it.

In relation to criterion d), it is my considered opinion that you are Usama bin Ladin’s greatest asset. Usama wants people like me to believe that my host country and other Western countries actively discriminate against me. UBL wants me to regard my host country as hostile to people deemed to belong to my religion, a religion you love to hate. UBL wants me to believe that the West is involved in a giant conspiracy against me and my faith.

I refuse to believe this. However, when I read your writings, I see you desperately trying to prove UBL’s words true. You actively oppose those seeking a better deal for persons of Islamic faith or Muslim heritage. Yet you express no opposition to those using the same methods to seek a better deal for Jews or other persons of minority faith living in Western countries.

You want Muslims to become second class citizens. For you, even a person’s partial Muslim ancestry (I specifically refer to US Democratic nominee Barak Obama) is enough to render them the target of your attacks.

You also actively engage in spreading distortion and misinformation about anyone deemed Muslim. You continue to peddle the lie that Commissioner Innes of the Human Rights & Equal Opportunity Commission (HREOC) has made specific reference to Muslim taxi drivers refusing to service him and his guide dog, despite the fact that the good Commissioner has repeatedly made it clear that he never specified any religion.

(I’d rather gamble my money away than give it to extremists like UBL or yourself.)

I’m a Muslim who wants to see Australians of my faith embrace the cultural symbols and institutions of Australia. I want young Muslims to be proud of their nation, to participate in its institutions, its politics, its arts, its cultural and public life.

I want to prove UBL wrong. You, on the other hand, are determined to prove UBL right. You are doing the work of al-Qaida. You are helping al-Qaida by spreading innuendo about Muslims and their institutions in the West.

You and your colleagues promise that you will “meet privately with government officials, editors, producers, academics, and others to explain the real nature of such Islamist organizations”. You will try to convince them that “the Islamists currently dominate the Muslim political scene in every Western society, without exception”.

In other words, you will actively work to convince as many non-Muslims as possible that Muslims are all closet extremists and fifth columnists.

On that basis, it only makes sense that you include me in your list of Islamists in much the same way as I would include you in my list of racists, neo-fascists, extremists, xenophobes and far-Right fruitloops. Heck, even Christopher Hitchens agrees with me.

So please, Mr Pipes. Please include me on your list.

Yours faithfully
I Yusuf
planetirf.blogspot.com