On Wednesday 21 June 2006, I have to give a presentation on the issue of citizenship to an audience of people probably far more learned than myself. The presentation has been organised by the NSW Chapter of the Independent Scholars Association of Australia. The event will be held at the Dixson Room at State Library commencing at 5:30pm.

I am part of a panel that includes legal prominent academic Associate Professor Helen Irving (who is without a doubt more learned than myself), and will be moderated by Councillor Ho of the Sydney City Council.

I'm not sure why they picked me to speak on this topic. I don't have a huge amount of experience in legal practice issues related to citizenship. I don't practise in immigration law or in citizenship law. I cannot claim any huge expertise on the subject. Plus, the only citizenship I know is the only one I have ever had - Aussie citizenship.

But I guess I have followed recent debates on citizenship and its relationship with national security and Australian values. And I have had some experience in conservative politics.

Anyway, this entry is not about me. It's about citizenship. So let's get on with it!

I wanted to share a few thoughts about how I perceive citizenship (see! there I go again! Always "I" and "me" and "myself"!!), with a view to generating some discussion here on how we understand citizenship in Australia and the Western world.

Recently, in a desperate attempt to get some attention and perhaps generate a diversion from embarrassing revelations about to emerge from the Cole Commission into kickbacks, Treasurer Peter Costello gave a speech about citizenship to the Sydney Institute.

Mr Costello issued a fatwa against what he described (from memory) as “misguided mushy multiculturalism”. He suggested that citizenship pledges needed to be made tougher, with new migrants pledging allegiance to Australian values.

It seems that citizenship is fast becoming an ideological phenomenon. You can only be a citizen if you sign up to certain values and ideas. This is a truly disturbing trend.

If citizenship means signing up to anything beyond ultimate loyalty to the country and obeying the law, I think we risk losing our liberal democratic identity. If we start placing ideological conditions on citizenship, we are potentially giving up our freedom of conscience and other fundamental freedoms we hold so dear. 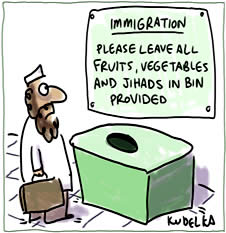 When you make citizenship conditional upon holding certain views, you are on the slippery slope to McCarthyism. If you enable citizenship to be taken away from people who, at some stage of their lives, decide they find perhaps one Australian “value” a little unpalatable, you are opening the door to witch hunts.

Perhaps it is my strong liberal and libertarian streak that leads me to sound potentially hysterical about this topic. Perhaps it is because I am an old style conservative (as opposed to an ex-socialist neo-Con) who believes that governments should keep their grubby hands off civil society except to the extent of providing a framework for the rule of law.

And how have we compensated for all the ills our society has meted out to its indigenous populations? What sort of a Christian nation are we when we refuse to apologise?

Actually, apologising is a genuinely Islamic value also. So on behalf of my Muslim self, I think it is important that we acknowledge and respect the cultures and beliefs of those whose lands we have taken and which we refuse to apologise or compensate for.

Some dimwitted conservative politicians accuse Muslims of imposing their culture on the rest of us. Of course, we all know about how Governor Macquarie so peacefully ordered his troops to convince indigenous Australians to embrace his values or face a bayonet. Talk about peaceful imposition.

Yes, I am writing somewhat passionately about this. Few things make me more sick than hypocrisy and double standards. Especially when they come from politicians who claim to be conservative liberals.

Which brings me to my final point. If there is any genuinely conservative politician in the front bench, it isn’t John Howard. It definitely isn’t Costello or Nelson. The only genuine conservatives I can see on the front bench are Tony Abbott and Alexander Downer. Why?

Because you won’t find these guys calling for a (mono-)cultural revolution. You won’t find Downer or Abbott pontificating on the need to dismantle our pluralist status quo. Nor, for that matter, will you find most of the small “l” liberals like Joe Hockey or Phil Ruddock.

Anyway, that is my splurge for the day.