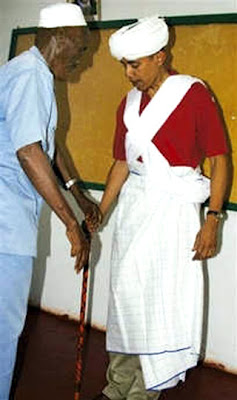 Sen. Barack Obama “is lying” when he insists that he has never prayed in a mosque and was never a Muslim ...

Daniel Pipes, founder of the Middle East Forum think tank, says he fully accepts that Obama is a Christian now. But there is strong evidence that Obama received a Muslim upbringing during his years in Indonesia, Pipes said.

“It’s fine with me that he was a Muslim and a convert to Christianity,” Pipes told Newsmax. Louisiana Gov. Bobby Jindal “is a convert from Hinduism. I have no problem with his conversion. What I have a problem with is that he’s lying” when he says he was never a Muslim.

Newsmax asked whether Pipes is alleging outright that Obama has lied about having a Muslim upbringing.

Pipes’ response: “The evidence suggests to me that he is lying, yes.”

Pipes told Newsmax, “It would start with the fact that his father was a Muslim — granted, not a practicing Muslim, but in the Muslim world, if your father is a Muslim, you’re a Muslim. His father named him Hussein, which is a name only given to Muslim babies. He went with his stepfather to a mosque. They celebrated certain Muslim holidays at the mosque together. He had knowledge of the Koran. He had knowledge of Muslim prayers. You put all this together, he was a Muslim.”

Yep, Hussein is a name never given to non-Muslims. Clearly this dude was an Islamic rabbi when he was named Hussein. But still those nasty violent conspirators plot and plan ...

Pipes said Barker’s story bolsters his position that Obama was raised as a Muslim while he lived in Indonesia. His accounts of Obama’s upbringing have received a “very severe reaction from the left” and threats from some Muslims, he said.

“The Islamists murmur and threaten,” Pipes said, declining to specify the threats he has received.

But despite allegedly receiving death threats, Pipes doesn't seem to have many people taking notice of his Allama Hussein bin Obama childhood experience?

The McCain campaign “has been very cautious about looking into Barack Obama at all,” said Pipes, adding that the GOP has demonstrated a general reluctance to raise questions about Obama’s past.

Daniel Pipes clearly has a point (pfft!). Muslims will all regard Pipes as an apostate.

“There is no doubt: It is a fact in Islam that the religion passes on through the father,” he told Newsmax. “And yet it’s denied as a falsehood by people who know better. They know better. It’s Islam 101.”

Pipes even has one academic supporting his view.

Supporting Pipes on that point is Shireen K. Burki, an adjunct professor of political science at the University of Mary Washington. Burki, who spent her childhood studying Islam at a school in Islamabad, Pakistan, has first-hand experience as the daughter of a Muslim father and a Christian mother.

Heck, Professor Burki surely is an expert. She studied Islam at school. In Islamabad. Now that's what I call expertise of the highest order!

And what do American Muslims think of Allama Obama? The following video shows a former Bush-supporter sharpening his sword and getting ready to put a jihad on Obama, the evil apostate. This video, from the Wahhabist jihadist Islamist extremist teerrorist fundamentalist Islamo-fascist al-Jazeera network, should be a warning to all aspiring ex-Muslim Presidential candidates!!

The US-based Fairness & Accuracy in Reporting (FAIR) has just released a detailed report on 12 pundits engaging in the smearing of a Semitic faith and its (often deemed but not actual) followers. The report is entitled Smearcasting and can be downloaded here.

The report oozes with detail and is fully-referenced, making it almost impossible for those profiled to bully the authors with threats of libel or defamation action.

Predictably, some of the dozen pundits profiled are associated with FoxNews. Strangely enough, others are regularly invited by prominent Australian thinktanks such as the Centre for Independent Studies and the Australia-Israel Jewish Affairs Committee (AIJAC) to speak in Australia. Among them is Mark Steyn, whose last tour was partly funded by the Federal Government. Here is what Steyn wrote in his America Alone: The End of the World as We Know It ...

The Serbs figured that out -as other Continentals will in the years ahead: If you can’toutbreed the enemy, cull ‘em. The problem that Europe faces is that Bosnia’s demographic profile is now the model for the entire continent.

AIJAC has led anti-racism campaigns against Pauline Hanson's One Nation party. The CIS and IPA promote individual liberty and freedom. One can only wonder what the heads of these thinktanks were thinking when choosing to invite persons who encourage the kind of thinking that treats 1.2 billion individuals across the world (including 360,000 in Australia) not as individuals but as members of a group to be singled out as hostile.

It's interesting that columnist Andrew Bolt described Steyn as "a formidable advocate for good sense". Then again, Bolt made these comments in the context of criticising the Howard government's funding of Steyn's visit. You can read Steyn's hsterical approach to European demography in his lecture to the Melbourne-based Institute of Public Affairs here.

It will be interesting to see if the CIS and AIJAC will again invite writers who seem to regard genocide as an option for Europe and who openly promote the kind of fear-mongering and prejudice common across the Western world in the decades leading upto the Holocaust. It will also be interesting to see if the Department of Immigration & Citizenship will provide visas for hate-mongers to visit Australia on speaking tours, and whether the Australian government will provide funding for such tours.

One author of the report has recently written about the distribution of the DVD Obsession in key "swing states" in the lead-up to the US election.

We are living in sad times when mainstream conservatives are promoting sectarian and racist nonsense.

UPDATE I: Speaking of nonsense, a certain Queenslander of dubious employment status has posted this dissertation on "the level of Muhammedan infiltration in Australian Immigration offices". But for true nuttiness, visit the top right-hand corner of the blog of Shukh Yer'mami (literally "urinate all over your mother", which might explain what SY's father was doing when SY was conceived) where, on October 9, the Shukh placed this imbecilic poll ...

If Obama gets in, will he destroy Israel?

The majority of voters support the first and fourth options. And if that isn't crazy enough, read the Shukh's defence of former Austrian Hitler-admirer Joerg Haider. Priceless!