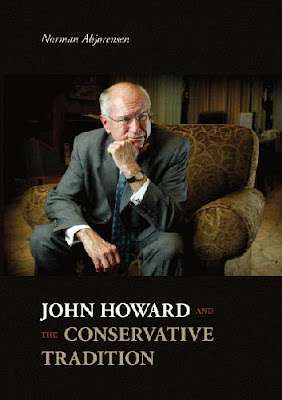 One of Australia's most prominent political commentators, Norman Abjorensen, has just published a book entitled John Howard & the Conservative Tradition. Anyone living in Canberra can attend the launch of this book by Humphrey McQueen on Wednesday November 12 2008 at 5:45pm at the Paperchain Bookstore located at 34 Franklin Street Manuka.

Abjorensen was one of Crikey's resident (if it's possible to have a physical residence online) commentators on the 2007 Federal Election. Abjorensen has also authored a biography of former Liberal Party leader Dr John Hewson, and was former national editor of the Sydney Morning Herald.

After predicting Barack Obama would go down a similar electoral path as former US Presidential candidate George McGovern, a dispondent Daniel Pipes writes this postscript on November 5:

Well, this prediction was badly wrong. To explain it away, I could point to the fall's financial problems, the media's bias, or to the McCain campaign's many errors, but there's a deeper issue here. I had confidence that the American people would reject Obama when they learned about his extremist political views, dubious associations, and biographical mysteries. I am astonished that these problems hardly registered, I feel bewildered by my own country, and apprehensive by what comes next.

A comment was left by "Gabby from australia" who compares Obama to Hitler and Stalin:

Hi I am Gabby from Australia here. I have been coming daily to this website for many years and i think that your usual ability to accurately predict outcomes and trends is still very accurate. I believe in you, absolutely ...

Remember ww2? Hitler was the same type, a cult of personality and slick propaganda of goebbels, Stalin, Lenin, they all lied didn't they and gullible people still followedd them, the ends justifies the means. Anyone remember how they rise to power ended up? I do.

Obama-he admits his brothers and sisters all are muslims, yet he admits his dad and step dad was muslim. Yet, still he persisted and continued to persist with the lie he was not amuslim nor ever was which is orwellian in the extreme of denialibility. "plausible or believable deniability". Majority of his borhters and sisters are still in poverty in Kenya.

If you tell a lie often enough it will be told as fact. You just need to read read about the koran to know its all lies. "War is deceit muhammad said". Well America is at war, and teh greatest liar has been elected. Indeed , War is deceit.

His cousin ODINGA in Kenya he gave a million dollars to and helped advise and electioneer for "cuz"odinga is a rabid jihadst whom has forced shariah law on the population of 90 per cent non muslims in that land. The rest of his kenyan family celebrated his victory as "obama is a son of kenya" son indeed, he was born in Kenya in front of his black african kenyan muslim grandmother who admitted it during a telephone call to a certain Bishop. His family still are por in kenya, I wonder with bro obama as president how many free citzenships will he hand out- ODinga? his brothers and sisters aunties uncles, why stop there. Let the whole fricken tribe in. Bet he will.

I'm sorry. My sides are splitting and I have other stuff to write. You can read the rest of Gabby's rant here. You can even add your own comment. But just remember this golden rule:

Comments are screened for relevance, substance, and tone, and in some cases edited, before posting. Reasoned disagreement is welcome, but comments are rejected if scurrilous, off-topic, vulgar, ad hominem, or otherwise viewed as inappropriate.

If you want to see Daniel Pipes in person, watch out for his next Australian tour, perhaps again sponsored by AIJAC and/or the Centre for Independent Studies.