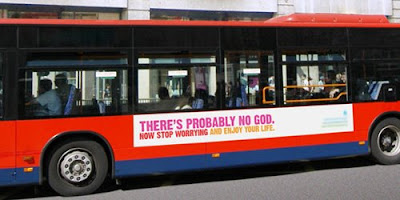 How’s this for religious freedom? A group of evangelicals have decided to advertise on British buses. Serious. And which divine being are they plugging? Well, it turns out the evangelical atheists at the British Humanist Society are plugging no God in particular. In fact, they’re advertising no god at all.

Britain’s bendy-buses will soon carry BHA-funded advertisements proclaiming “THERE’S PROBABLY NO GOD. Now stop worrying and enjoy your life”. Already the BHA has raised around 4 times what they expected for this ungodly advertising blitz.

Now don’t ask me what the f*** a bendy-bus is. All I know is that London Mayor Boris campaigned against them before he was elected, calling for the reintroduction of those gorgeous double-decker buses fitted with conductors, preferably ones looking something like piccaninnies with watermelon smiles. Or better still, Russell Peters. And if the conductors don’t like such racial profiling, Boris can always tell them to “go if they don’t like it here”.

Now apparently former Mayor Livingstone introduced this more malleable variety of public transport. Livingstone, of course, was a nasty pinko-lefty. These buses must be part of his grand socialist plot to make us all think the same. And now these biased leftwing buses are carrying blasphemous messages!

Richard Dawkins, an Oxford Professor, is supporting the campaign. Why? He told the Pom version of the Daily Telegraph (via The Age):

Religion is accustomed to getting a free ride — automatic tax breaks, unearned 'respect' and the right not to be 'offended', the right to brainwash children. Even on the buses, nobody thinks twice when they see a religious slogan plastered across the side. This campaign to put alternative slogans on London buses will make people think — and thinking is anathema to religion.

British Christians are enjoying all this attention being given to God. I’m sure God Him/Herself won’t mind either. However, our Young Liberals will surely see Dawkins’ intervention as yet another leftwing campus plot. I urge them to immediately fly to the UK and save Londoners from what is clearly a direct challenge to the Christian heritage we inherited from Mother England. Take Fred Nile with you. And for the sake of Barry O’Farrell’s election chances, please don’t come back.

An edited version of this was published in the Crikey daily alert on Wednesday 22 October 2008.