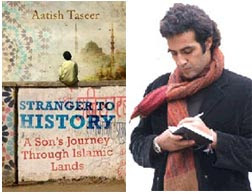 A Stranger to History: A Son's Journey Through Islamic Lands
By Aatish Taseer
Text Publishing, 323pp, $34.95

WE all inhabit the same planet, yet so often we hear phrases such as "the Muslim world" and "the Western world". Do such discrete entities indeed exist? Perhaps those best equipped to answer this question are those with one foot on either side of the divide.

Aatish Taseer, a 29-year-old freelance journalist and the son of an Indian Sikh mother and a Pakistani Muslim father, should have been such a person. That he isn't so is not entirely hisfault.

The two sides of Taseer's family share the culture and language of Punjab, a region in the northwest of the Indian subcontinent shared by India and Pakistan. Islam and Sikhism have inhabited Punjab's geographical and cultural space for centuries. Sikhism is indigenous to Punjab, while Punjabi Islam has adopted the cultural symbols of the land.

My background is a mixture of Indian and Pakistani. Having been reared in a small South Asian community in Sydney, I found it almost impossible to tell Muslims and Sikhs apart. To this day it is easy for me to confuse a mosque and gurudwara (Sikh temple) until the saffron flags of the latter become apparent.

But there is a huge difference between my upbringing and that of Taseer, whose parents' relationship was kept largely secret.

Taseer's father, Salmaan Taseer, became a senior figure in the Pakistan People's Party, at present the governing party of Pakistan. He is a businessman, media magnate and governor of Pakistan's Punjab province.

At the time of his parents' brief affair, which lasted hardly a week, Salmaan Taseer was already married with three children.

After his parents' separation, Aatish was reared in his mother's Sikh household in Delhi, under the wing of his loving maternal grandfather. The grandfather had grown up in what is now Pakistan and still corresponded with his best friend from across the border.

Like other Sikhs, the Singhs had to flee their ancestral lands in what became Pakistan during the 1947 Partition, which still leaves some members of the family bitter and resentful towards Pakistan and Muslims in general. To his credit, the maternal grandfather wasn't affected by these sentiments.

It wasn't until 1980, when he was 21, that the author met his father again. Taseer's interest in travelling through Muslim-majority states was sparked after he wrote a story on the July 7, 2005, London bombings for British magazine Prospect. Taseer's father wrote an angry letter ...

... accus[ing] me of prejudice, of lacking even 'superficial knowledge' of the Pakistani ethos. 'Do you really think you're doing the Taseer name a service by spreading this kind of invidious anti-Muslim propaganda?

Taseer was upset by his father's letter, an irreligious Pakistani politician who hardly embodied religious values.

Yet Taseer's language when describing his father is always restrained, consistent with the elegant and often hauntingly beautiful prose of the book, sadly spoiled by serious factual errors exhibiting not prejudice, which would have been understandable, but some elementary research.

In setting the stage for his travels, Taseer writes that the whole Islamic world ...

... stretched between my father [Lahore] and the place where I read his letter [London].

How does Taseer expect his reader to take his understanding of the Muslim world seriously when he excludes from it the world's largest Muslim majority state, Indonesia?

He claims his father's Pakistani Islam emphasises rejection of Hinduism. But this is hardly pan-Islam, as I discovered during a visit to the Javanese cultural capital of Yogyakarta in 2006.

There I saw Muslim artists perform the Hindu Ramayana ballet before Muslim audiences in one of Southeast Asia's oldest Hindu temples. Not all Muslims share the religious chauvinism of some Pakistanis.

Taseer's book covers his travels in Turkey, Syria, Saudi Arabia (including a visit to the pilgrimage centre of Mecca), Iran and Pakistan. In each country he provides us with tremendously detailed portraits of scenery, but when it comes to people our encounters are limited to the devout yet chauvinistic on the one hand or the irreligious and resentful on the other.

Are we to believe that only an insignificant unrepresentative minority exists between these two poles?

Most unfortunate for Taseer is that his paradigm for understanding pan-Islamic sentiment emerges largely from Hassan Butt, a young British man who for years claimed to have recruited British Muslims for al-Qa'ida.

Taseer brought Butt to prominence in the article that prompted his father's wrathful letter. Yet in December last year Butt admitted to a British court that he was a professional liar who had told journalists (including, presumably, Taseer) stories the media wanted to hear.

It's a shame such an elegant piece of writing is spoiled in a way that may make some dismiss it altogether.

Sadly for Taseer, this book, the product of months of travel and a lifetime of anguish, may vindicate at least some of his absent father's criticisms. It is not a vindication well-deserved.

Irfan Yusuf is author of Once Were Radicals: My Years as a Teenage Islamo-Fascist (Allen & Unwin). This review was first published in The Australian on 27 June 2009