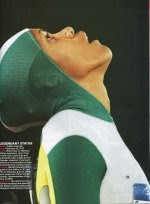 When I was growing up, some of my Indo-Pakistani aunties expressed some extraordinary views. One was particularly scathing of Indo-Pakistani doctors who married gori (Hindi/Urdu for "white-skinned" ) women. "These gori women are all cheap. They just take our men's money and then leave them for some handsome white fellow!"

It wasn't just the auntie's implication that men of Indo-Pakistani origin could not be good-looking that offended me. It was also the idea that women with white skin were necessarily selfish, money-hungry and incapable of maintaining stable relationships with wealthy tanned medical practitioners. This particular auntie often boasted of being highly educated herself. Apparently she had completed a Masters degree in Indian literature from some university whose name I could never pronounce and won't even try spelling.

However, having a quality tertiary education doesn't inoculate one from making absurd generalisations about entire groups of people. Back in May 2006, I found myself seething with anger and disgust having read an article in a certain newspaper which contained this startling claim: "Traditional Aboriginal society was always harsh on women".

Indeed, I was so disgusted to read this that I put fingers to keyboard and sent the following e-mail to the opinion editor:

It reflects poorly on your newspaper that it could [publish a] piece... Claiming that Aboriginal cultures are characterised by abuse toward women and children is a gross insult to our nation's cultural heritage. Would you publish an article if the writer to make such claims about Jewish cultures? Or about Catholic or English-speaking cultures?

I think it reflects poorly on you that you can't even think outside your narrow ideological box. What is wrong with competing ideas, esp[ecially] , given that the 30-year orthodoxy of self determination has disadvantaged so many indigenous Australians in the outback.

Whether indigenous Australians should be stopped from living anywhere in what is essentially their country is a debate I'd rather avoid. My concern is this strange obsession some allegedly conservative people have with proving that their culture is somehow superior to everyone else's. And even more strangely, that they somehow have the right to issue black cheque fatwas about the cultures and histories of entire races.

The Australian recently published some important observations of Major-General Dave Chalmers , who has just completed an 18 month stint running the Northern Territory Intervention. Chalmers is convinced indigenous Australians can only secure a better future by preserving their culture. And this can only be done if we as a broader Australian community learn to respect indigenous cultures.

Over time, we as a society have undervalued indigenous culture and in many places it's been lost... And where it's been lost, people have lost their compass, they've lost their framework of life. It's not being replaced by a mainstream Australian framework, and people are in limbo. We need to be paying a lot more attention to traditional healers and traditional lawmakers, the role they played, and play, in people's lives.

Genuine conservatives show genuine respect and reverence to our 40,000 year indigenous cultural status quo at least as much as they will to our 220-odd year European status quo. That involves recognising the sophistication of indigenous communities. In her 2007 book The Outsiders Within: Telling Australia's Indigenous-Asian Story Peta Stephenson tells just some of the stories of trade and cultural interaction (and indeed intermarriage) between indigenous tribes and Makassar trepang fishermen from Sulawesi (going back at least a century before Captain Phillip landed in Botany Bay) and Chinese indentured labourers.

Stephenson shows that these interactions were suppressed by colonial and Australian authorities, with members of culturally mixed families torn apart. Her nook should convince even the most hardened monoculturalist the Indigenous Australia wasn't some isolated monolithic horde of noble savages waiting for the Poms to civilise them. Before and after Europeans settled and plundered, non-European peoples interacted with indigenous peoples on more equal terms, respecting their laws and customs.

We've all heard of Cathy Freeman's indigenous heritage. But how many of us are aware that Freeman is also part-Chinese? Her great-great grandfather moved from China in the late 19th century to work on sugarcane farms in northern Queensland. Stephenson writes that Freeman actively supported Beijing's bid to host the 2008 Olympics, and Chinese-language newspapers openly celebrate her Chinese heritage even if mainstream newspapers ignore it.

And who could forget the 1988 bicentennial celebrations, including the re-enactment of the Endeavour landing in Sydney? Our Territorian cousins up north had their own celebration, with the landing of the Hati Marege (meaning "Heart of Arnhem Land" in Indonesian) on the Arnhem Land coast. Stephenson provides evidence of Makassar fisherman from Sulawesi making annual voyages to fish for trepang (sea cucumbers) and to trade with the local Yolngu people since as early as the 17th century. This mutually beneficial trading relationship was banned by the South Australian government in 1906-07, ensuring the local Aboriginal people became isolated and insular. Mixed Makassan and indigenous families were torn apart, some only reunited recently after 80 years.

Indigenous Australians entered into complex and sophisticated trade relations with numerous non-European peoples both before and after colonisation and dispossession. They didn't need Europeans to teach them how to interact with outsiders. It's about time we learned more about these aspects of indigenous history so that we can enjoy the same healthy respect and admiration for the first Australians as Major-General Chalmers.

First published on the ABC Unleashed website on Wednesday 03 December 2008.