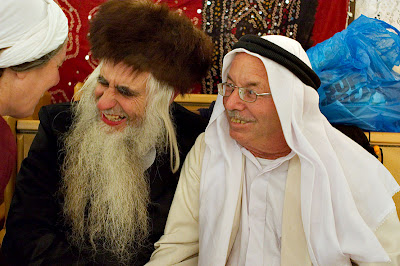 Tabloid columnist Melanie Phillips was so quick to condemn the Archbishop of Canterbury for his comments on sharia.

(Then again, so were many others including Dr Tariq Ramadan).

During a recent appearance on Stephen Crittenden's Religion Report, Mel ranted and raved on about how sharia is oh soooo nasty to those poor oppressed Muslim women.

Now I must say that I agree with her to the extent that she says that in many instances sharia courts are used in a manner which, at the very least, discriminates against women. But mad Mel didn't stop there. She actually said that such discriminatory practices were rooted within Islamic theology itself.

The Archbishop made it clear in his lecture that the comments he makes concerning sharia courts and Islamic sacred law would equally apply to rabbinical courts and Jewish sacred law. Conveniently, Mel glosses over that point. Perhaps she expects Muslims to be critical of their sacred law whilst refusing to be critical of her own. A case of "do as I say but not as I do" perhaps?

The fact is that so many of the difficult issues concerning sharia courts and their interaction with civil and secular law are equally present in Jewish sacred law. In saying this, I am not suggesting that Orthodox Jews should not have the right to practise their sacred law or to have their affairs determined by courts of their choosing. Nor am I suggesting that oppression of women is central to Judaism or any other faith.

Rather, my point is that the clash of jurisdictions is present in many many civil societies where religious and secular law must interact.

This includes the civil society of the world's only Jewish state. Writing in Haaretz, Tamar Rotem discusses the dangers of extending the limits of rabbinical courts in Israel ...

The young woman walking toward the offices of Mavoi Satum, an organization that offers assistance to women whose husbands refuse to divorce them, was only 21, married for two years, and pregnant. The daughter of a well-known right-wing spiritual leader, she grew up in a veteran settlement, was wed in an arranged marriage, and asked a rabbi before she decided to get divorced. Her husband was not mature enough for marriage, and was quick to anger. She was condemned to wait a few years for the divorce. One day, in the hallways of the rabbinic courts, her lawyer asked her why she had started the divorce process in the religious court. "My father would not let me do it any other way," she answered. "The civil courts are off-limits to us."

Social Affairs Minister Isaac Herzog was blind to the reality of women like this - who are typical of a growing number of people in Zionist ultra-Orthodox society who do not recognize civil courts - when he fielded his unsound proposal to expand the powers of the rabbinic courts. On a silver platter, this bill gives rabbinic judges the option to adjudicate any civil matter, from property and inheritance to labor laws. For people for whom Torah law is not something they deliberate over, this option is a religious imperative ...

... This dangerous bill, if it had passed, would have worsened women's status, already low in rabbinic courts. Meanwhile, following the public debate after the bill's presentation, Herzog backpeddled, and its discussion by the cabinet was postponed ...

Zionist ultra-Orthodox women would be the main victims of this bill; women who even now are condemned to be extorted by their husbands. Who can ensure them that all aspects of the divorce will not be given by agreement to the rabbinic court after the divorce itself? The ultra-Orthodox community has an internal system to deal with men who refuse to give their wives a divorce, by means of threats, payments under the table and shunning. Attorney Batya Kahana-Dror, of Mavoi Satum, says that in recent years more and more women among the Zionist ultra-Orthodox are being refused divorces ...

Why not have judicial pluralism? Why not let every sector of society adjudicate in keeping with its worldview? That was the question raised last week in a conference called by Kolech, a women's forum committed to Jewish Law and gender egalitarianism, at the Van Leer Institute, following the presentation of Herzog's bill. This is the answer: The state must protect those who do not have freedom of choice and who are inferior in Jewish law.

I recognise that in countries like Malaysia and Pakistan, the (albeit partial) application of sharia in criminal and family law operates in a manner that severely discriminates against women. I wonder whether Mel Phillips will now make the same admission about Jewish sacred law. Will she call for the dismantling of the Beth Din? Will she openly write about the oppression of her Jewish sisters inside the world's only Jewish state?

And will she decry the fact that this law is being introduced by a coalition consisting of the allegedly moderate Kadima party in coalition with the virulently anti-Christian and anti-Muslim Shas party? Or, to quote Tamar Rotem again ...

This dangerous bill, if it had passed, would have worsened women's status, already low in rabbinic courts. Meanwhile, following the public debate after the bill's presentation, Herzog backpeddled, and its discussion by the cabinet was postponed. The threat, however, is still there, because it is rooted in coalition agreements between Kadima and Shas, and Shas will not give up easily.

Will Mel Phillips be consistent? Or will she claim that what's good for the Jewish kangaroo is never good for the Muslim wallaby? I certainly won't be holding my breath.