On behalf of me, myself and I, welcome to Planet Irf. Put together by Irf (short for Irfan, an Arabic name and spelt as (mis)-pronounced in Turkish) Yusuf. So who on earth is Irf Yusuf and why is he spending all this time writing for your obvious pleasure, entertainment and enlightenment?

I live in Sydney, Australia. I have lived here pretty-much full-time since I arrived in 1970. I was 5 months old, and naturally I did not have much choice at the time. And thankfully my dad chose Sydney as opposed to the other choice (Cox's Bazar in what was then East Pakistan, on the eve of a bloody civil war).

I am happy I live in Sydney. I am thankful that I live in a liberal democracy, where I have freedom to pursue virtually whatever economic, social, educational, medicinal or spiritual journey takes my fancy. I am also thankful that I live in a country which enjoys more political stability than perhaps any other nation on earth. I attribute this to our constitutional arrangements which are built upon the solid foundation of constitutional monarchy.

OK, I admit it. I am basically a conservative liberal. But what sort of person is that? Those of my readers who will have read or been exposed to conservatism and/or liberalism will know that these terms can mean all sorts of things. For me to describe myself as such does not really tell you a whole heap.

So how-on-irf do these terms apply to me? I guess you'll have to wait and see as I take you on a journey through my thoughts and reactions to all sorts of local, national and international events.

Thanks for coming and be back soon!

OK, I have changed my mind a little since I wrote this last. Probably some of it has to do with the fact that so many of the people I used to look upto as conservative heroes have now jumped on the neo-Con bandwagon.

Take our PM, for instance. I still admire the dude for his political skills and his tenacity. He really is a survivor and a flourisher. But why must he insist on maintaining stupidly unconservative positions?

I mean, locking up kids in the desert may be something Stalin would have done during the 1950's. Except that the Siberian gulags tended to be rather colder than Baxter. Yet we are doing this in Australia in the name of conservatism. What makes it worse is that we are separating kids from their parents.

And yes, I agree that Saddam is a nasty brute. The Taliban weren't all that nice either. Does that mean we have to install the drug cartels of Hamid Karzai to replace them? Does that mean the war in Iraq was justified? Does that mean sending depleted uranium into towns and cities was a good idea?

Then there is the Hicks/Habib fiasco. What a joke! The government has been caught out potentially being involved in the torture of an Australian citizen! Is torturing citizens part of the conservative tradition? Perhaps in Chile under Pinochet.

What really scares me is the increasing links between the Liberal Party and Christian fundamentalism. The national Young Liberal President is employed by Hon David Clarke MLC. David is known to sympathise with the Catholic organisation Opus Dei. David is also close to Hon Rev Fred Nile MLC. Both are actively involved in trying to stack Liberal Party branches with anti-abortion activists and people who are looking forward to Christ's second return, a time when Christ will allegedly finish off the job that Hitler only partially completed (partially, as in 6 million).

Get ready for the sort of wackos and in-breds in the US Republican Party to take an active role in the Liberal Party. God/G-d/Allah/Buddha/Krshna/Bhagwan help us!

Here are some endorsements that once appeared on the right hand column. 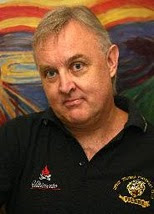 The ABC Unleashed website then published an online article by the Muslim spokesman, Irfan Yusuf ... ridiculing those who raised the possibility of a terrorist connection to the bushfires. Even the police became involved ...

(From an article defending the "forest jihad" thesis published in the ever-wacky National Observer. Wow. The police are in cahoots with with a Muslim spokesman that no Muslim organisation has appointed to speak on its behalf! Perhaps Dr Bendle's article should have been titled "Bendit Like Bendle".) A chap having some association with Melbourne University Union.

Pakistani born Sydney lawyer Irfan Yusuf ... make[s] us wonder whyCrikey and other publications continue to pay him money for his race-baiting and erroneous words of hate.

(Well, Andrew, maybe it's because I'm not obsessed with people's ethnicity or where they were born.)
Posted by Irf at 1:31 am