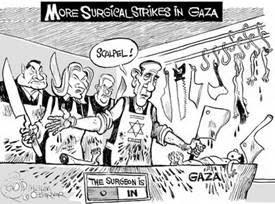 The amazing thing about the internet is that a world of information not reported in the mainstream media becomes open to you. The usual gatekeepers of different sides to a dispute must now compete with voices they would otherwise ensure you never get to hear.

Australian media have, by and large, been exceptionally compliant with the wishes of those who find it impossible to make even the midlest criticism of Israel's actions in Gaza. Yet Israelis themselves are quite prepared to be speak out. Among them is a group called Physicians for Human Rights - Israel. The organisation has documented incidents of where the allegedly surgical strikes by the Israeli Defense Forces (IDF) have resulted in the deaths of doctors and paramedics working in extremely difficult conditions in Gaza.

In a recent letter to the Israeli Ministry of Defense, PRH-I documented five attacks on military personnel, among them ...

On the morning of 28.12.08 the Al Surani Clinic in Shaja’iah was badly damaged following army strikes aimed at a police station in the neighborhood. Rawia Awwad, a pharmacist working in the clinic was critically injured in he attack ...

On 28.12.08 at approximately 6:50 am a Palestinian Ministry of Health storage facility containing medications and medical supplies was destroyed in a bombardment in the Mal’ab Filasteen district ...

At approximately 2 am on 31.12.08 Dr. Ahab al Madhun, age 35, and Mr. Muhamad Abu Khasideh, a paramedic, age 20, were killed in an IDF bombing while attempting to evacuate injured persons around the area of Tel a-Ris, east of Gaza City. The ambulance called to the scene was also hit and damaged in the attack. Mr. Abu Hatzidah was killed on the scene. Dr. Almadhun died several hours later at Kamal Adwan Hospital.

PHR-Israel has also been monitoring the Israeli media regarding reports by the Head of the General Security Services (GSS; Shabac) that Hamas military operatives are utilizing medical equipment from Shifaa Hospital for use in attacks. In a phone conversation with PHR-Israel staff, hospital administrators staunchly denied these allegations ...

Don't expect the usual suspects to report what many Israelis themselves are saying.