Page 19 of The Weekend Australian carried the headline "Saudis’ secret agenda". Co-authored by my old buddy Sheik Dicky Kerbaj, the article discusses how: "The Saudi Government - largely through its embassy - is believed to have funnelled at least $120 million into Australia since the 1970s to propagate hardline Islam..."

And the evidence for this claim? Kerbaj commences his article with the example of the Imam Ali ben Abi Taleb Mosque at Lakemba after receiving a donation for $360,000 some 35 years ago:

It was a donation, a gift, a part payment to subsidise the construction of ... Lakemba mosque. More than 35 years after Sydney cleric Khalil Shami received the cheque, he insists it came with no strings attached. But while the cheque had no tangible conditions in the form of written instructions or binding contracts, the cleric received a message from his donors several months after depositing it.

"They said: 'Please, can you mention the tragedy of the Palestinian people and what's happened to them in your sermon?'" Shami tells Inquirer.

There you have it. Talking about "the tragedy of the Palestinians and what’s happened to them" is clearly an example of "hardline Islam". If you don’t want to be seen to be a follower of "hardline Islam", you basically have to deny any Palestinian suffering, to believe Palestinians are living in utopia, free to practice their high-jumping skills on that "security barrier" built through their farms, villages and towns.

If you even express sympathy for Palestinians, you’re obviously receiving Saudi petro-dollars. Either that, or you are a hardline Wahhabi, a threat to Australian security, deserving of being declared so on the pages of our national broadsheet.

So what does Kerbaj say about non-Muslim Aussies expressing sympathy for Palestinians? Will Kerbaj claim that former Coalition MP’s Tim Fischer, Ross Cameron and Bruce Baird, all of whom chaired the Parliamentary Friends of Palestine, are also hard-core Muslims? Or how about NSW State MP’s Chris Hartcher and Paul Lynch of the NSW Parliamentary Friends of Palestine? Are they also Saudi-funded hard-core Muslims?

And perhaps Kerbaj should investigate allegations made against FoxNews after Saudi Prince al-Waleed bin Talal purchased a large stake in News Corporation. These include allegations that Prince al-Waleed actually contacted Rupert Murdoch and insisted FoxNews change the headline on one of its banners concerning rioting of French Arab youths.

Or has Rupert Murdoch also become a hardcore Muslim? 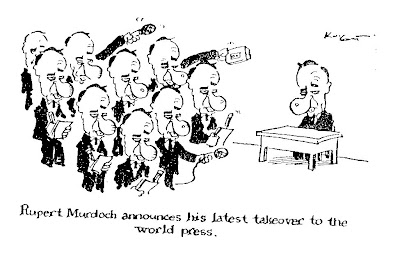