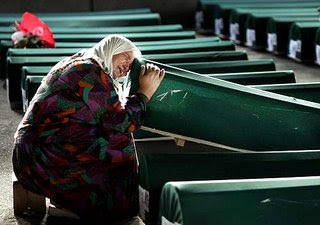 Radovan Karadzic, the murderous Sarajevo psychiatrist, was the architect of a brutal war in Bosnia Herzegovina during the mid-1990s that cost hundreds of thousands of civilian lives and that involved the gang rape of tens of thousands of women.

Karadzic masterminded the worst atrocities in Europe since World War II. His forces set up concentration camps where supporters of the Bosnian government were tortured, butchered and murdered.

In his memoir Enemy Combatant, former British Guantanamo inmate Moazzam Begg describes meeting a Bosnian Muslim refugee who was gang raped in the presence of her husband and with their three-month old baby screaming. Soon after the rape her husband was shot and her baby decapitated, all in her presence.

The bulk of Karadzic's victims were indigenous Bosnians who did not fit into the categories of "Serb" or "Croat" and whose ancestral faith was Islam. Of course, this did not make Bosnia a Muslim state in any theocratic sense. To be Muslim was more an ethnic than religious feature. Hence, the expulsion of Muslim and Croat populations by Karadzic's forces was appropriately referred to as "ethnic cleansing".

Bosnia Herzegovina was established by Europeans who included Muslims not wanting a uniformly Islamic or theocratic state but rather a genuinely modern pluralist European state. Muslims showed their commitment to European values and liberal democracy.

And for this, they were rewarded with genocide and an arms embargo that crippled this young state's ability to defend itself. Karadzic rejected that pluralist vision and fought it using violence reminiscent of the worst excesses of Nazi Germany. He received international support by default in that the world refused to lift an arms embargo and so deprive Bosnia's army of weapons it needed to defend itself.

To describe the newly established republic of Bosnia back in the 1990s as a Muslim country was and remains an absurdity. At least 30 per cent of Bosnians had ethnically and religiously mixed parentage. One tragic image of the war was two young lovers, a Bosnian Serb boy, Bosko Brkic, and his Bosnian Muslim girlfriend, Admira Ismic, gunned down by Serb snipers while attempting to flee Sarajevo. They died in each other's arms. Their funeral service was attended by both families and friends, and included elements of both Orthodox Christian and Muslim liturgy.

Yet if Karadzic's war actually achieved anything arguably positive for his foes, it was putting indigenous European Islam on the world map. This was an Islam happy to live in (and indeed lead) a genuinely pluralist society. The central square of Sarajevo, once Europe's oldest centre of Islamic learning, still has the houses of worship of four communities (a synagogue, a mosque, an Orthodox and a Catholic church).

It's a bitter irony. For many non-Western Muslims and Muslim migrants living in Western countries, the existence of Bosnian Islam first hit their radar via the images of imams leading the funeral prayers of children shot by Karadzic's snipers or cut to pieces by shrapnel fired by Karadzic's forces. For many of us, Bosnian Islam became a reality at a time when it faced extermination.

Countries like Bosnia and Kosovo serve as reminders that Islam is a European faith. If it were not so, large indigenous European Muslims would not exist in the heart of Europe.

I remember being told of an incident where an imam was invited to say a prayer at an interfaith service a few weeks following the September 11 attacks on the United States. The imam was Bosnian. A Muslim attending the service went up to the imam and asked why he was wearing European dress. "Because I am European," was the imam's reply.

For some Western Muslims, the message of the Bosnian war was clear. What point is there in trying to culturally integrate into Western societies? Integration didn't stop Bosnian Muslims from being slaughtered, raped and butchered. Muslims felt they were damned if they did and damned if they didn't ...

Karadzic may be in custody and awaiting trial but his sentiments and prejudices are alive and well.

The International Court of Justice has already described the Bosnian war as genocide, even if it deprived Bosnians of justice by refusing to rule in favour of Bosnia's application holding what is left of Yugoslavia responsible. Let's hope the International War Crimes Tribunal can deliver the justice Bosnia needs to heal.