CRIKEY: Nick Griffin: to visa or not to visa ... 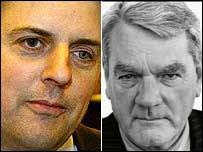 It’s hard to know how best to approach hate-mongers seeking to grace our shores. For years, genuine free speech (as opposed to hate-speech) advocates and anti-anti-Semites agonised over how best to respond to visa applications by Holocaust-denier David Irving. Should they lobby for Irving’s visa to be denied? Or should they allow him in and hope good sense will prevail and people listen to him and realise just how loopy he really is?

No doubt similar concerns will be relevant should the likes of Raphael Israeli plan a further visit to Australia. The Howard government’s attitude to foreign hate-speech was somewhat inconsistent, refusing visas to some thick-Sheiks whilst funding Mark Steyn to lecture us all on how dirty smelly Mozzlems are turning Europe into Eurabia (a decision even Andrew Bolt opposed). Even the illustrious folk at Quadrant have hosted a Eurabia lecture by a man who continues to insist Barack Obama is telling lies about his religious heritage.

And now I’m wondering if it’s a good idea to write about Nick Griffin, leader of the far-Right British National Party (formerly known as the British National Front), accepting an invitation to visit Australia. Am I giving him attention he simply doesn’t deserve? Am I giving his tour some much-needed free advertising?

Far-right fruitcakes like Griffin no longer sound like fruitcakes. Whilst previously extremely racist and anti-Semitic, Griffin’s party has shown a greater degree of political sophistication in its rhetoric. In the lead-up to the last UK Council elections, the BNP almost overnight transformed itself into a pro-Israel party, with one British Jewish leader quoted as saying the BNP’s website is one of the most Zionist of any British political party. Griffin has jumped on the same sophisticated smear casting bandwagon as the dozen pundits recently exposed by a US-based media watchdog.

(Of course, that didn’t stop the BNP website from writing this eulogy of the late Austrian neo-Nazi leader Jorg Haider.)

Racial and sectarian hatred is becoming a booming political industry. Mainstream conservative parties and their pollsters-cum-advisers are happy to engage in minority-bashing. Far-Right parties are taking advantage of this conservative posturing. The articulate likes of Griffin need to be watched. But how do we combat the fires of hatred without adding oxygen or turning them into free-speech martyrs? And how should the Immigration Minister exercise his discretion in relation to Griffin’s visa application?

First published in the Crikey daily alert on Monday 13 October 2008.

UPDATE I: A reader known as "steve martin" writes in response:

Let's face it the World Trade Center, the London bombings and the Bali bombings have allowed the loonies to come out of the closet, indeed even giving their views a veneer of respectability.

When I was at school many years ago one course that was given related to logic. It appears not to be taught these days.