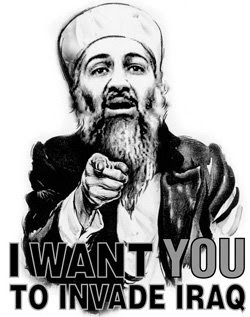 In a column dated 22 March 2008, Greg Sheridan confidently wrote that the regime of Saddam Hussein was directly linked to terrorists from groups that formed part of al-Qaida's umbrella.

Well, sort of. Here's an excerpt from his column ...

Newly published Iraqi documents reveal just how extensive Saddam's involvement with international terrorism was. The summary of these documents, published under the heading Saddam and Terrorism, has been reported across the world and read by almost no one. Its first paragraph reads:

"The Iraqi Perspectives Project review of captured Iraqi documents uncovered strong evidence that links the regime of Saddam Hussein to regional and global terrorism. Despite their incompatible long-term goals, many terrorist movements and Saddam found a common enemy in the US ...

The world was misled about this report because of the focus on one single sentence of the report, which said: "This study found no smoking gun (that is, a direct connection) between Saddam's Iraq and al-Qa'ida."

However, the report does portray a vast network of Iraqi support for terrorist organisations that includes numerous groups the report identifies as "part of al-Qa'ida". The misleading and declaratory sentence presumably refers only to Osama bin Laden and al-Qa'ida central itself. For example, the report states: "Captured documents reveal that the regime (of Saddam) was willing to co-opt or support organisations it knew to be part of al-Qa'ida, as long as that organisation's near-term goals supported Saddam's long-term vision." This included, for example, Saddam providing financial support for Egyptian Islamic Jihad, led by Ayman al-Zawahiri, bin Laden's deputy.

Acknowledging this support, but saying there's no smoking gun directly to al-Qa'ida itself, means the report is taking an incredibly restrictive and precise view of al-Qa'ida.

But in any event this report is not claiming, as wrongly reported in the wires, that there was no link with al-Qa'ida, merely that it found no absolute smoking gun in the translated documents ...

The new report is also important in showing how much in common Saddam had with al-Qa'ida ideologically. Saddam always wanted to glorify himself as the centre of a new pan-Arab nation rather than establish a new universal caliphate glorifying Islam, as was bin Laden's ambition.

So Usama bin Ladin wanted to be a pan-Arab leader. In what sense? Was bin-Ladin an Arab nationalist in the tradition of Gamal Abdel Nasser?

But what of Sheridan's claims of strong ideological affinity? Well, believe it or not, the Washington Post has also dealt with these same documents. In a report dated March 26, 2008, the Post says ...

Media reports on the Pentagon's five-volume translation of truckloads of Saddam Hussein- era documents tended to skim the surface, picking the highlights and the obvious, such as the absence of evidence of an "operational relationship" between Hussein and al-Qaeda.

"By the middle of Volume 5" of the tome prepared for the military's Joint Forces Command, Steven Aftergood of the Federation of American Scientists tells us, "most people will have entered an altered state of consciousness." But not the eagle-eyed folks over at the federation, who sifted through the review and came up with a stunner.

It's in a 50-page analysis by Iraq's crack military intelligence crew that "disparages the austerely conservative Wahhabi school of Islam by claiming that its eighteenth century founder, Ibn 'Abd al Wahhab, had ancestors who were Jews," the FAS reported.

Talk about burying the lead! Who cares about warmed-over stuff about Saddam and Osama? Now, this is news.

The shocking Iraqi analysis says that Ibn 'Abd al Wahhab's grandfather's true name was not "Sulayman" but "Shulman." (Of course! The Saudi Shulmans! ) "Tawran," a source often cited by Iraqi intelligence in the reports as an expert, "confirms that Sulayman, the grandfather of the sheikh, is (Shulman); he is Jew from the merchants of the city of Burstah in Turkey, he had left it and settled in Damascus, grew his beard, and wore the Muslim turban, but was thrown out for being voodoo," the Iraqi document says, according to a Defense Intelligence Agency translation.

Anti-Wahhabi polemical works of both Sunni and Shia variety frequently alleged Ibn Abdul Wahhab had some Jewish ancestry, as if this is enough to discredit him. The irony is, of course, that Jewish ancestry is NOT passed through the paternal line but rather through the maternal line. In other words, Ibn Abdul Wahhab's grandfather's religious affiliation is only of some polemical interest if he was his maternal grandfather.

Now in what sense does Saddam Hussein have ideological affiliation with bin-Ladin when Hussein's official government records happily reproduce anti-Semitic insults about the ancestry of the man who founded a sect that bin-Ladin and his followers strictly adhere to?