COMMENT: Yet more evidence that Daniel Pipes has completely lost it ...

In the months leading upto the Presidential election, Daniel Pipes spent much of his time spreading rumours that Barack Obama was somehow hiding his father's ancestral faith and his own childhood links to it. Some of Pipes' more absurd claims included one that wearing a sarong somehow linked someone to Islam.

(At this point, I should warn all you Aussie tourists to Bali to take careful note of Pipes' warning, lest you end up an accidental Islamist fundamentalist extremist jihadist terrorist like the bloke pictured below.)

Since the election of President Obama, Pipes has become all but irrelevant. Apart from a small number of far-Right fruitloops that congregate around his blog, Pipes has become largely irrelevant. It remains to be seen if even the CIS or AIJAC will waste their money inviting Pipes this year.

And as if it cement Pipes' reputation for outlandish generalisations and almost chronic xenophobia, read an excerpt from this opening sentence to his most recent article published on the far-Right FrontPageMag blog ...

As the Muslim world settled into ever-deeper decline over the past decade, mired in political extremism, religious sickness, economic irrelevance, WMD, anarchy, dictatorship, and civil wars ...

In the past decade or so, Indonesian democracy has gone from strength to strength. Malaysia's opposition parties have had major gains. Bosnia Herzegovina has improved relations with both its neighbours, and has returned to being a relatively stable democracy. The new nation of Kosovo has emerged, a close ally of the West.

How can such a broad-brush generalisation be possibly made by a sensible educated person? How can 1.2 billion people be characterised in this manner?

With such moronic nonsense being passed off as serious analysis, it's little wonder any sensible outlet would publish Pipes' fantasies. 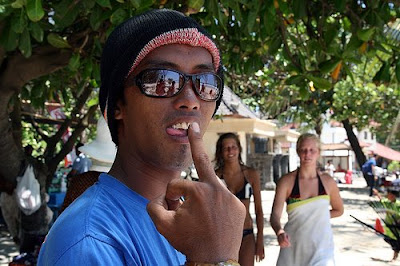 CRIKEY: Become the evil you wish to see defeated ... 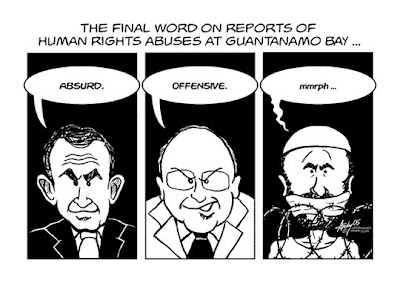 Mahatma Gandhi once said: "Be the change you want to see". But in George W Bush's so-called "war on terror", the extreme opposite applied. At Abu Ghraib, Guantanamo, Bagram Airbase and in secret CIA torture facilities across the world, it was (and quite possibly remains) a case of: "Be the evil you want to see defeated".

Each and every account I have read from former Guantanamo detainees describes some of the most gruesome (or, as recently released Briton Binyam Mohamed describes it, "medieval") forms of torture. In Mohamed's case, the torture took place in Pakistan, Morocco, Afghanistan and Guantanamo over a period of seven years. Being some six feet tall, Mohamed lost one quarter of his body weight. He now weighs a mere 57 kilograms.

Here's a sample of Mohamed's treatment before he even set foot on Guantanamo soil:

*In Morocco, he spent 18 months being deprived of sleep, severely beaten and had his genitals cut with a scalpel.

*In Afghanistan, he was kept in a small black hole in prison, beaten, strung up and subjected to extremely loud music.

Combined with his treatment at Guantanamo, it all reads like something out of an al-Qaeda or Taleban guidebook (minus the beheadings).

Mohamed's lawyer reports Mohamed confessed "to anything those inflicting that treatment on him wanted him to say". Who knows how many things Mohamed confessed to? Former Australian Guantanamo detainee Mamdouh Habib also tells in his memoir about signing confessions after repeated torture and beatings.

Despite their confessions, both were released without any charges being laid. As if to underscore his complete innocence, Mohamed was released as soon as he arrived in London.

What makes all this even more scandalous is that Britain's own security agencies may have collaborated with the Americans in Mohamed's torture. At the very least, MI5 were likely to have been aware of his treatment.

Former US Defence Secretary Donald Rumsfeld told the world that those held at the Guantanamo Bay facility were "the worst of the worst". Yet as Peter Bergen, author of Holy War Inc and An Oral History of al-Qaeda's Leader, co-writes:

... only five percent of all detainees at Guantanamo were ever apprehended by US forces to begin with ... Almost all of the detainees were turned over to American forces by foreigners, either with an axe to grind, or more often for a hefty bounty or reward. After U.S. forces invaded Afghanistan in late 2001, a reward of $5,000 or more was given to Pakistanis and Afghans for each detainee turned over.

Trial by ordeal should have been left in the Middle Ages. Our failure to do so means we have handed medieval forces of terror a moral victory they simply don't deserve.