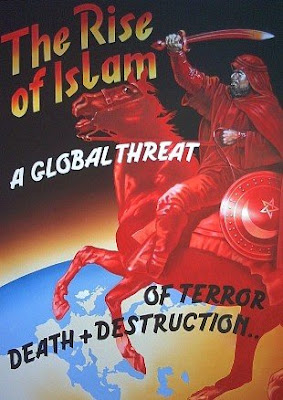 [01] It seems New York Congressman Anthony Weiner is hiding the fact (?) that his untucking of his tackle is part of some devious form of taqiyya.

For those of you who don't know, the word taqiyya is an Arabic term used in Muslim jurisprudence. Basically what it means is that if someone pulls a gun out and threatens to shoot you if you confirm you are a Muslim, you are permitted to lie about your faith if it means you don't get shot. Sounds perfectly reasonable to me.

But according to some fruitloops in the mainstream Right of the United States, taqiyya is the mechanism by which Muslims, like their Jewish forebears, use deception and cunning to hide their true intentions - to take over the world. The protocols of the learned imams of ... um ... well everywhere!

Some rightwing Jews are also getting into the profoundly anti-Semitic act. Among them is Elaana Benador, who was once a darling of the neo-Cons and ran her own speakers bureau which had some of the most influential neo-Cons on its books.

Now Benador has turned her sights to former Congressman Anthony Weiner, claiming that he in fact is a secret Muslim. Her evidence goes something like this:

1. Some imam made a comment calling on Weiner's wife, Huma Abedin, to counsel her husband and have patience with him.

3. The imam and Ms Anedin seem to be involved in some strange form of taqiyya.

4. The imam's excuse for Weiner is the kind of excuse that would only be made for a Muslim husband.

5. Weiner must have been converted to Zombi'ism after being his neck bitten by both the imam and Ms Abedin. He also became a Muslim.

Of course, this all means that Ms Abedin now has access to the upper echelons of power. She can use this access to ensure that by next week, the White House will have a Muslim president. That is, if it doesn't have one already.

Read more about it here and here.

Email ThisBlogThis!Share to TwitterShare to FacebookShare to Pinterest
Labels: neo-Con, politics, US

Is it an essential element of the role of a magistrate that they not have a mental illness of any kind? Including one that is easily treatable?

Former NSW Attorney General Frank Walker doesn't believe so. After all, plenty of elected officials suffer from mental illness, whether they admit it or not. And they are involved in lawmaking and often in executive decisions that affect the nation and that are often enforced by magistrates.

Frank Walker has been a carer for two sons who were both diagnosed with schizophrenia. He lost both to the illness. He knows as well as any carer the stigma attached to the illness.

Magistrate Brian Maloney's own psychiatrist, who first diagnosed him with bipolar disorder, has stated that His Honour is fit to return to work. The Judicial Commission doesn't agree.

In the case of Magistrate Maloney, complaints were not made about his decisions but rather about aspects of his manner.

If Magistrates are hung out to dry for being mentally ill, what message does this send to others in business, politics, professions etc who look forward to the day when they can be open and up front about their mental health?

... depression sufferer Mr Brogden, former state Liberal leader while in opposition and now CEO of the Financial Services Council, said mental illness should not prevent someone from being successful in business or public life.


"I am medicated daily and receive regular counselling," Mr Brogden said in the letter to MPs. "My disclosure of this has not prohibited me from leadership roles in business and the community.


"You must, of course, satisfy yourself that Mr Maloney is medically fit.


"From that point, you cannot make a judgment that someone with a mental illness should be barred from judicial office."


I'd like to think our elected officials will show some good sense in this matter.

I don't get much time to blog these days. Or to write. Lots of work. Lots of travel. But there's still so much to write about, so much lunacy to laugh at.

So here's an experiment. I'll cover the best bits of lunacy from Thursday to Thursday. The lunacy can take various forms - imbecilic politics, hypocritical comment, whatever. Let's start.

[01] A small cabal of twits at that American-owned newspaper that likes to call itself The Australian have become obsessed with the twittering activities of a single Sydney academic. I mean, seriously obsessed. I don't know what Larissa Behrendt has done, but it seems hardly a day goes by without some mention of her allegedly scandalous tweet about something appearing on Q&A. Today they're still going on about how Behrendt is being paid $641 a day by Ms Gillard's government to review indigenous higher education.

Um, what scandal? The only publications making a big deal about it are the even more divisive Quadrant and The Amer ... woops ... Australian. And it all happened back in April. And she said sorry. What more can she do?

Senator Evans yesterday again rejected criticism that she was not suitable for the role; he revealed he had met her once since the incident. "(I said) that I regarded the comments as inappropriate and offensive," he told the hearing. "She told me she had apologised and she was highly regretful of the incident."

But that isn't good enough. All kinds of dirt is being whipped up about this poor woman. What on earth do Chris Mitchell's minions expect her to do? Apologise to Andrew Bolt? Tweet some undying love for Irish Republican terrorism? Join Alan Jones' Galileo Movement? Still a photo of John Santamaria on her office wall? Support the extension of the Federal indigenous intervention to New Zealand and the Solomon Islands?

Behrendt may well have opposition. She may well be divisive. But so what? Why hassle someone because of one tweet? Especially when you are a newspaper that has spent so much of its space printing divisive tripe about a host of minorities.

[02] My old factional partner Peter Phelps has come along way since he used to edit his far-Right newsletter The Atlas. In those days he called for Medicare to be dismantled. Now as a member of the NSW Upper House, Phelps is comparing climate scientists to Nazis. What the f#ck??

Phelps, of course, is an expert on climate science. He has a PhD from the University of Sydney. In history.