POLITICS/UK: BNP wants to set up a penal colony ... 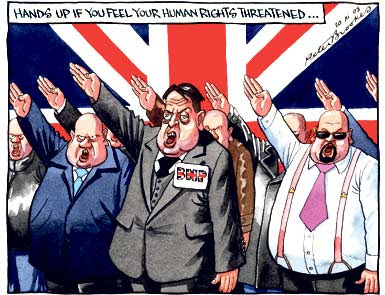 Well, it looks like Nick Griffin, the Grand Ayatollah of the British Nazi Party (BNP) wants to be a serious contender in the upcoming UK elections. And his policies? Well one involves establishing a penal colony.

A future Queen's Speech written by ... Griffin ... would include legislation to make beer cheaper in British pubs, introduce formal bank holidays for all national saints' days and reintroduce capital punishment for drug dealers and child murderers. Householders would be allowed to defend their property by "whatever means necessary" and a penal station for extremely dangerous criminals (including rapists) would be built on the British island of South Georgia. Out would go wind turbines and foreign aid and in would come a new high-speed 200mph magnetic levitation inter-city rail network. Traffic congestion would be brought under control by curbing the "immigration invasion".

Why send British illegals to South Georgia? Why not send them to Sydney? Heck, we already have tens of thousands of illegals working here anyway. Let them do some hard labour in the market research phone rooms of Chippendale and Manly. Let them suffer in the heat of Wilderness Society bear suits as they ply for donations on the city streets. And let them weep and gnash their teeth oceans away from home as they watch us colonials cheer and laugh as England is defeated by New Zealand in the World Cup in South Africa.

Tim Blair writes a gorgeous piece about his Aunt Jill and her struggles with bipolar disorder. There really is nothing further I can add to it except that it is a must-read.

UPDATE I: We all pray for Tim and his relatives. Any readers who believe they may be suffering or know something who might be suffering from this condition should read this after reading Tim's fine piece.