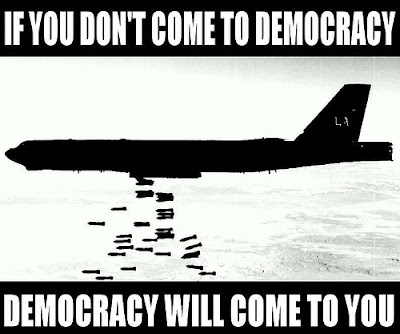 Here’s an example of the kind of fruitloop reasoning that makes so many American conservatives such a laughing stock:

Are the Arabs capable of democracy? And if so, can Americans be the agents of their transformation? The answer, of course, is that no one knows. The lack of a single democratic Arab government gives grounds for skepticism. The claim that something in Arab culture makes it resistant to democracy cannot be refuted until the first Arab democracy comes into being. (Joshua Muravchik, former resident scholar at the American Enterprise Institute)

Here's a simple bullshit-free translation: Sorry, sand-niggers. Your raghead culture is inferior to ours. You can’t have democracy unless we become the agents of your change. Without us, you won’t get anywhere. In the meantime, we'll blame your culture for shoving down your throats dictators that you hate but that guarantee us access to cheap oil.

Ordinary Egyptians took a mere 18 days to show what a load of crap this thinking was. And who opposed their peaceful uprising? Why none other than a large number of the same American conservatives. Funny that.

UPDATE I: Here's a few choice words from an Australian of Egyptian heritage as reported in the Sun-Herald today:


... Nour Eldin Tarraf, a 35-year-old orthodontist who moved to Sydney from Cairo five years ago, said the real threat to Egypt's prosperity was not religion. ''I'm a Muslim who grew up in a building that was half-Muslim, half-Christian - no one cared,'' said Mr Tarraf, of the Sydney Egyptian Revolution Solidarity Committee.

''The real problem is corruption. It infiltrated every rank of Egyptian society, and changing that will not be easy.''

UPDATE II: Even those who sold Mubarak to the nation are suddenly trying to reinvent themselves. The Washington Post recently published a piece about the editor of a pro-Mubarak (as in state-owned) newspaper:


For now, Osama Saraya is still editor in chief of al-Ahram, the state-run Egyptian newspaper that has long been a deferential mouthpiece for the president and his ruling party.

But his main preoccupation seems to be reinvention.

Portraits of Hosni Mubarak no longer adorn his office walls (one is stashed under the television, others behind a curtain). Photographs of Saraya with top government officials have been turned upside down.

It was only last week that Saraya was denouncing the chaos caused by pro-democracy demonstrators. His editorial in al-Ahram on Sunday carried a very different tune.

"A salutation to the revolution and respect to its youth," Saraya wrote. "The corrupt in Egypt were only a few that led to the destruction of the country, and their era is gone now.''