CRIKEY: How a Sufi spiritual pledge becomes an act of terrorism ... 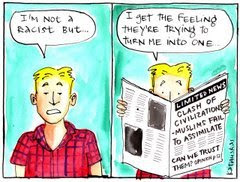 In 1998, I decided to take the spiritual plunge. I’d been reading books and articles about Sufism, watching videos about whirling dervishes and immersing myself in the poetry of Rumi a 13th century Afghan-Tajik poet who settled in Konya (in modern Turkey) after his family fled my rather bloodthirsty Mongol ancestors including this lovely chap. Yep, rightwing politics was in my genes!

Anyway, I decided it wasn’t enough to imagine life as a Sufi so I became one. I joined a Turkish Sufi order in Auburn. That involved my pledging to my Sufi teacher that I would obey God and observe the sunna (example and teachings) of the Prophet Muhammad. I further pledged that any disobedience to God and the Prophet would represent disobedience to my teacher and therefore a breach of my pledge.

OK, I’ll admit it. I was a pretty hopeless Sufi. Imagine an overweight rightwing Young Liberal singing (or should that be miming?) like these Bollywood actors ...

Then again, I wasn’t exactly in salubrious company. One of my fellow Sufis was a Hell’s Angel, who stood next to me at the funeral prayers for my late teacher back in 2003.

But now, according to a report in today’s Australian, my simple act of formally pledging allegiance to a Sufi order (known in Arabic as a bay’ah) has just been declared a "Muslim terrorist vow". The report sites unnamed "Australian counter-terrorism agencies" capturing a secret tape recording of the pledge made by some young me to convicted terrorist Abdel Nacer Benbrika in September 2005.

The Oz claims this discovery of the bay'ah is a "world first". I'm not sure which world they are living in. Perhaps it is a world where you describe 1.2 billion people as having genetic defects because they marry their cousins. Who knows?

The bay’ah is an ancient Arab practice dating back thousands of years. In pre-Islamic Arabia, it was given by members of a tribe to their leader as a kind of substitute to voting. In those days, when Arabia was racked by tribal and internecine wars lasting generations, such pledges were necessary to keep people on side.

Arabs regarded keeping one’s word as a mark of honour. The Prophet Muhammad adapted the practice in that he transformed it into a pledge to battle one’s inner ego by pledging to obey God. Each new convert made the pledge.

These days, few converts make bay’ah to anyone except themselves. To convert to Islam, all you need to do is recite (preferably in public) an Arabic phrase which is a summary of the more detailed bay’ah formula. In other words, The Oz report effectively suggests that our counter-terrorism agencies now regard the mere act of religious conversion to terrorism.

I guess ASIO and the Feds had better start planting secret listening devices in Turkish Sufi houses across Auburn and Broadmeadows. I just hope these devices aren’t knocked out of place by the skirts of overweight whirling dervishes.

First published in the Crikey daily alert for Thursday 18 September 2008.