This Sunday, Australian Prime Minister John Howard will receive an award from the Australian branch Jewish National Fund. The JNF dinner in Melbourne will feature as its guest speaker one Brigette Gabriel.

Ms Gabriel is a member of the JNF’s speakers’ bureau. She is a journalist and author of a book entitled BECAUSE THEY HATE: A Survivor of Islamic Terror Warns America.

The title of the book reflects Gabriel’s main thesis – that Islam and its presumed followers are a threat to the United States and the West in general. Gabriel appears to be a supporter of one of the more radical sides of the Lebanese civil war.

In the JNF’s official biography, Gabriel is described as an innocent victim of the

... war ... pitting the combined forces of militant Muslims and Palestinians against the Christian Lebanese.

Gabriel’s Lebanese upbringing is described as the

... Arabic (sic.) society, culture, and media [that] taught her that Israel and Jews were the devil. 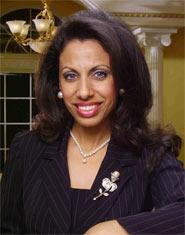 In other words, the entire Lebanese civil war was little more than Palestinians and Lebanese Muslims attacking Christians. One doubts too many Lebanese Christians would agree with this version of events which effectively whitewashes Israel’s lengthy occupation and successive incursions that have killed tens of thousands. Further, even someone with the most elementary knowledge of Lebanese affairs will know that neither Muslims nor Christians were united against each other.

The biography describes how a

... barrage of Muslim rockets exploded in her house leaving her wounded and buried under the rubble.

I wasn’t aware that rockets actually had any religion.

Another biography of Gabriel is more telling. It describes the Lebanese civil war as

Gabriel expressed her views on Islam and Muslims in an article penned for the far-Right Frontpagemag.com. She dismissed the diversity of the Muslim world as

... a canvas of hate decorated by different nationalities who share one common ideology of hate, bigotry and intolerance derived from one source: authentic Islam ... They slither and they hiss, and they would eat each other alive, but they will unite in a hideous mass to achieve their common goal of imposing Islam on the world.

As if to underscore her expertise in Muslim affairs, Gabriel engages in name-dropping: 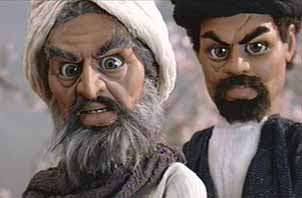 Gabriel is committed to defending democratic freedoms by fighting democracy and civil liberties:

Tougher laws must be implemented that protect our right to life and liberty, and if that means a declaration of war putting other rights on hold for a while, so be it!

In my opinion here are several initiatives that I believe will protect us in the homeland. 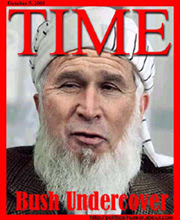 According to one conservative promoter of the book, Gabriel describes the following frightful code of hatred used commonly by Muslims across the world:

The common phrase among Muslims, "First comes Saturday, then comes Sunday" - and why it bodes ill for Jews and Christians ...

I've never realised that getting the right order of days in the week was a sign of global Islamist fundamentalist terrorist extremist jihadist dhimmitudist taqiyya-ist jihadist jerka-jerkist terror. I guess I'd better not talk about the days of the week next time I find myself going through airport security.

Of course, one wonders why a prominent Jewish organization would want to invite as its guest someone who spends so much of her time attacking another Abrahamic faith. You’d think Jewish leaders would be sensitive to someone who promotes the kinds of racial and religious profiling that affect observant Jews as much as observant Muslims (not to mention Sikhs and others).

One also wonders why John Howard would want to speak at a gathering where such views are being promoted. Does Mr Howard endorse racial and religious profiling? Would Mr Howard have accepted an invitation to a function where the main speaker was calling for similar measures against Jews?

If Ms Gabriel’s animosity was limited to extremist Muslims who use religion as a cover for violence and political upheaval, I’m sure the majority of Muslims would be happy to support her. However, it’s obvious Ms Gabriel believes ordinary Muslims are the problem, and that “authentic Islam” promotes violence and hatred.

Ms Gabriel is entitled to her views. The JNF’s Australian arm is entitled to promote such views. Unfortunately, by hosting such a Muslim-hating propagandist, the JNF are disrupting the good work which other Jewish organisations are doing toward building bridges with members of the Islamic and other faiths.

Perhaps an even more vexing issue is again that of ministerial discretion, something I've discussed elsewhere. The Minister has residual discretion to refuse a visa to someone on general grounds which Mr Andrews has described here in the following terms: 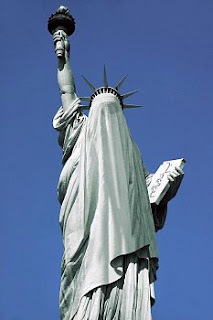 One wonders, therefore, what Kevin Andrews or his predecessor was thinking when granting a visa to someone who promotes hatred toward substantial sections of the Australian community. Does it mean I can get a visa if I promote hatred toward certain kinds of Lebanese and all kinds of Muslims? If I accuse every single Muslim, whether he be a prominent banker, an AFL footballer or even a lawyer known to be capable of becoming intoxicated just by being in the presence of alcoholic fumes of being part of the grand conspiracy to have Australia conquered by the Republic of Jerkajerkistan, can I expect the Minister to exercise his or her discretion in my favour?

And on one final note, here's a terrorist we could all learn to love ...