CRIKEY: Tabloid journalists and the presumption of innocence

Tabloid journalists and lawyers have a strange relationship. Tabloid journos often have little regard for the legal rights, privacy, presumption of innocence or reputation of (especially accused) persons they report on. So I found it quite ironic when a tabloid journo threatened me some years back with a defamation suit. S/he was unhappy with my description of his/her/its ridiculous reporting of a chap s/he claimed was a terrorist.
The chap was actually accused of keeping bomb-making materials in his house. The police had already ruled out terrorism-related charges. But for the journo reporting the incident, the accused was a Muslim who had framed Arabic calligraphy on his walls and a Koran and some religious books in his bookshelf.
Anyway, the point I’m trying to make is that some journos are quick to see accused deprived of their rights, without realising that their hysterical reporting threatens the rights of all of us. Journos included.
Rights that people have fought and died to defend over the centuries. Like the presumption of innocence, and the right to refuse to be interviewed by police. These rights form a key plank in our criminal justice system. In a liberal democracy, these rights form an important element of "The Rule of Law".
So when Ben Fordham accosted Belinda Neal and asked questions like "What have you got to hide?", he effectively suggested Neal’s exercise of a basic legal right was illegitimate. He basically said she must talk, if not to the police then to viewers of A Current Affair.
Now let’s put the shoe on the other foot. Let’s say Fordham or one of his camera crew were the subject of a police investigation for potentially assaulting Neal (as I hope they are), what would Fordham say if Neal suggested that he and/or his crew must submit to a police interview?
My guess is Fordham would cry foul and self-righteously claim political interference in the criminal justice system. Fordham might even instruct his lawyers to express their disgust at this political interference, both before the magistrate and the cameras.
Populist journos and politicians are crying foul over one Queensland judge’s decision to release convicted pedophile Dennis Ferguson after finding that media saturation had made it impossible for a jury to deal with the facts of Ferguson’s impending charges in a "dispassionate" manner, despite the weakness of the Crown’s case.
Instead of blasting the judge, tabloid journos and shock jocks need to consider how their own conduct is compromising our criminal justice system. These same shock jocks should ask themselves what would happen if they were accused of pedophilia or some other criminal offence. They should understand that even accused persons deserve human rights. After all, until they are convicted, they are innocent.
Tabloid media needs to understand the meaning of innocence. And before anyone accuses me of sounding like a typical criminal defence lawyer, allow me to disclose that my area of practice is employment and workplace relations law.
UPDATE I: A reader named "Michael" posted this comment on the Crikey website ...

Irfan-the only quibble I have with your piece is that you didn't name the silly cow who threatened you.

I pretty much agree with the article. I certainly agree that tabloid hysteria can be extremely counterproductive when it comes to preventing child abuse (either, as in this case, driving paedophiles underground or alternatively, as in the recent Henson case, taking attention away from actual paedophilia and focussing it on perceived abuse). In respect of Neal, I agree that she had the legal right to not be interviewed, but where I differ from Irfan is that Neal can't pretend she hasn't spent the last two years telling anyone who'll listen that she is the best person to represent the region in Federal Parliament. She's pleaded with voters to put their trust in her, and promised the Parliament that she'll fully cooperate, and the more she tries to deal with this situation legalistically the more it looks like she has to rely on legal protections rather than the facts of the matter. As it stands, the media today are suggesting that her preselection is gone anyway, so she may as well go back to her legalistic approach and tell the Ben Fordhams of this world to f-ck off.

UPDATE III: The comments keep coming on Crikey. Here's what "stevce martin" had to say ...

I always enjoy reding Irfan Yusuf's articles in Crickey, always clear thinking, and always telling it as it is - or should be.

Gee thanks, dude.
UPDATE IV: OK, this is the final comment, I think, from Michael ...

Dave Liberts-if the law doesn't apply equally to Belinda Neal-a QLD pedophile or a jaywalker it isn't worth the paper it's written on. That is the point and for the PM and premier to pressure Neal & Della Bosca to forgoe their rights because of continual media harping debases all of us and IS an
abuse of process. It's highly probable that the disgusting media trashing of this couple and the pressure placed upon them to deny their rights is a far greater sin than a stupid dispute aboout table seating.

And when Neal was elected to represent the people of Robertson she doesn't automatically lose her rights and quite frankly, I'd be happy for her to represent me in Parliament-she seems to have more guts than the tossers in the media and certain MPs who cave in when the media goes beserk.

I wouldn't write off this couple too soon-2 years is a long time and this matter will be history within weeks. And speaking of Robertson-not one of the yapping political pundits who claim to report on
politics has taken the time to travel to Gosford and actually investigate how this matter is perceived amongst the voters. By ignoring them with -they insult them.

Although of course the trashy tabloid TV show that Fordham appears on presented an anti-Neal protest from the area-oddly enough, lead by the defeated Liberal candidate. 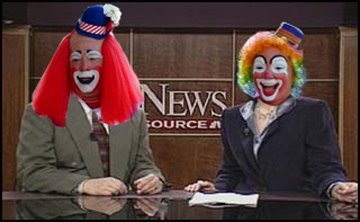