The latest marketing campaign to get tourists to visit Australia has left IRFAN YUSUF cold.

Last Christmas, I accompanied my Californian relatives on a drive around the North Island.
My uncle was impressed that Auckland's Khyber Pass was somewhat less volatile than the Pakistani equivalent.

I was unimpressed at Kiwistani New Year's Eve ads. Who was on the New Year's menu? None other than Aussie rock legend Jimmy Barnes.

Why would this icon of Aussie working-class blokes waste his time playing across the Tasman? Surely he would rather spend New Year's Eve hanging out with all the other successful Aussies such as Russell Crowe, Jenny Morris and the Finn brothers in Byron Bay or some other Aussie artistic mecca?

As soon as I got back to Sydney, I rang my friend Sue. Now, Sue lives in Melbourne with her funky Egyptian partner, Wal. She's a music freak and also has the benefit of some Kiwi heritage.
I expressed my complete disgust that an Aussie musical icon would usher in the new year by gittung pust across the Tizmun.

Irf, you dimwit Aussie. Jimmy Barnes is probably a Kiwi Scot! When are you going to learn that all decent Aussie talent comes from New Zealand? And stop talking in that stupid, pretend- Kiwi accent!

I later sought expert advice from Professor Google, and discovered that I was right all along. Still, it's a fact that talented Australia always seems to have Kiwi roots. I still can't believe Kate Ceberano is half-Hawaiian and not half- Maori.

Some readers may be wondering why better-heeled overseas visitors than normal are flying into Auckland or Wellington. Is it the Lord of the Rings factor? Or are the Yanks hoping to be told off by Winston Peters in person in the absence of meeting King Kong?

Actually, the real reason is probably because Australia's tourism promotional people haven't been able to recruit any Kiwi talent. Let's face it, which smart Kiwi would come up with an ad showing some girl in a bikini beseeching the world with: "So where the bloody hell arya?"

As I write these lines, I can see my copy of a travel magazine put together by The Australian Financial Review in association with The New York Times. The glossy 46-page read, called Life & Leisure – The Sophisticated Traveller, is now in its eighth edition.

Inside are advertisements for watches made in Geneva, expensive resorts and hotels with a nightly room charge equivalent to 10 times the average yearly salary of someone in Bangladesh.
Featured destinations include Kyoto ("tradition and good taste"), Hollywood ("romance and glamour") and Brazil ("Baroque churches a bejewelled past").

So the sophisticated Australian planning his or her next holiday has exotic and sophisticated destinations promoted in language fit for the gods.

Meanwhile, the best that Australia's government-funded tourism spin-doctors can come up with is a bikini-clad model or some crocodile hunter from the last century holding a snag and seeking response to the query of "Where the bloody hell arya?" 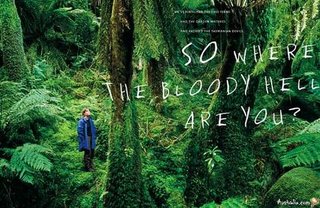 And if you think that's bad enough, the ads show ordinary Aussies (presumably without a trace of Kiwi blood) reciting parts of a nonsensical mantra which put together declares: "We've poured you a beer, we've shampooed the camel, we've got the 'roos off the green, we've got the sharks out of the pool and we've saved you a spot on the beach."

The controversial campaign was launched in New Zealand late last month. Tourism Australia managing director Scott Morrison says the campaign will be distributed over the next few months in the United States, Britain, Germany, South Korea and China.

Morrison claims the campaign "draws on the high level of goodwill toward Australia and Australians".

Aussies can only hope and pray too much of this goodwill isn't used up once the phrase "bloody hell" is translated into Mandarin, Japanese, German and Korean.

Morrison, a former campaign director for the ruling Liberal Party of Australia, defends the choice of not-so- heavenly words. "This is not a cultural essay but a carefully crafted and well- researched campaign designed to encourage international travellers to get Australia off their wish list and into their travel itinerary."

Writing in The Australian Financial Review on March 4, American-born humourist Peter Reuhl puts it like this: "To an American ear, it's just another country's trailer park-trash language."

I admit I am no advertising guru. I'm also not a huge fan of rap music (even if performed by obviously more talented Kiwis). But I reckon even Eminem or Snoop Dog could have come up with more effective (though perhaps more offensive) words of enticement.

So where the bloody hell are all those potential tourists considering a holiday to Australia? After watching this crassly Ocker campaign, my guess is many will be saying to themselves: "I'd rather spend my holiday in bloody Christchurch!"

Irfan Yusuf is a Sydney lawyer. First published in the Christchurch Press on Friday 10 March 2006