A reader named Jim and located in Japan sent this e-mail to the wonderful folk at that magnificent website Online Opinion, who then kindly forwarded it to me ...

I can't find (being mostly computer illiterate) how to directly contact the blog sites.

Brilliant, funny, very human - an amazing talent that makes me happy to be able to think of myself as Australian - even though I'd prefer to think I am a citizen of our world. Nevertheless it is my Australian Passport which permits me to travel to the world! I am concerned that there is too much us and them in the world and I think that Irfan's huge talent is to make us smile at the absurdities of bigotry and prejudice - to know how very human we all are despite cultural (including religious) upbringings! Bravo, mate!

I was born in Sydney - ancestry is from England and Scotland - but uncles, aunts and cousins to the nth degree bring in most parts of the known world and a wide range of complexions and perspectives - including those I find difficult to understand. It pleases me that I have German, Chinese, Thai, French, Indigenmous Australian, NZ Maori, Japanese, et al links - but it may not necessarily please all of them... that seems to be the way of it all. I've lived nearly half of my adult life outside of Australia and can truly state that I have been treated with amazing kindness and generosity. My mother, who has never been outside of eastern Australia could tell you the same thing but of her neighbours - from the Philippines, from the Netherlands, of Indigenous and English and Scottish and Chinese ethnicities as well as Catholic and Protestant and agnostic backgrounds...

It is a great world - and Irfan helps us see that - while pricking the pomposities of those ethno-centric souls who wish to look down upon others.

A hero of mine from mid-19th century Japan, YOSHIDA Shoin (1830-1859) believed in equality of peoples, was opposed to the rigid class system of the time, advocated education for women, took up the cudgels, as it were, on behalf of the untouchables of that time - stressed co-operative learning arrangements, encouraged his students by writing private letters, gave no tests, in fact, in his school! Yet his students went on to lead the modernisation of the country - some a little too much influenced by their foreign mentors I might contend - nevertheless two became Prime inisters, one the first Foreign Minister, another the father of Japan Rail, another the father of Japanese technical education, leading diplomats and bureaucrats! Go abroad. Learn about the world and come back were the kinds of things he advocated.

It seems Irfan is playing something of a similar role for Australia! Again, Bravo, I say!

My response? Jim, mate, thank you for your kind words. And the cheque's in the mail! 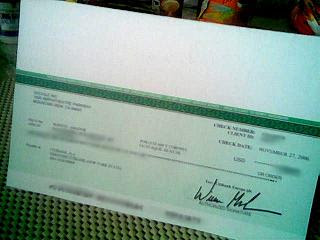 UPDATE I: Some anonymous comment seems to suggest that I defended the role of Japan in the Second World War. S/he obviously hasn't read what I've written here or here or even here.

BLOG: How tendentious can you get?

The Sydney Morning Herald today ran my reflections on heavy metal music, moderating blog remarks and Soviet-style Camden folk who wish to dictate to the Anglican church to whom it can and cannot sell its property. On that note, readers are now urged to stop reading and start rocking ...

Check out this Bollywood-style mimer ...

UPDATE I: Poor Tim Blair is most upset with my tribute to his blog-moderating patterns. After mentioning Daniel Pipes' futile call to for all "respectable" newspapers to cease publishing my "tendatious" writings, Blair gets to the heart of the issue, avoiding any personal and ad hominem attacks. For Blair, the real issue isn't my being allegedly "two-faced, five-chinned" or being "Mesopotamia Fats". The real issue is that I am a "very bitter person". And Blair's ultimate evidence for this is the words of a failed (and extremly bitter) Greens Local Government Candidate. Blair also complains about my light moderating workload. Funny that. For someone who has his blog hosted by a newspaper claiming to be Sydney's top-selling paper and owned by one of the world's largest media organisations, Blair only managed 9 comments as at 3:30pm. Still, at least Blair has News Limited staff to assist him.

UPDATE II: Jeremy has some fun with Bolt & Blair here. Sounds like a possible name for a movie ...

UPDATE III: As at 11:15pm, Mr Blair's blogpost has 13 comments. That's an almost 50% increase! Anyway, I'd better get back to watching that SBS documentary on the operation of Israel's rabbinical courts ...