(Here are some excerpts from an article was published on the MuslimWakeUp website during Tariq Ramadan's last Australian tour in 2004/05.) 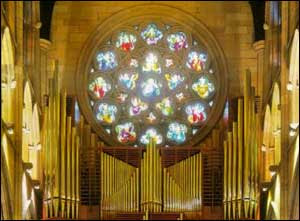 Ramadan Does Boxing Day in the Sydney Opera House

This year, I spent Christmas midnight for the first time at midnight mass at Sydney’s St Mary’s Cathedral ... I wanted to do something different for Christmas. Watching the majestic organs of St Mary’s playing whilst the magnificent choir circled the isles of the Cathedral was a truly amazing spiritual experience ...

Interestingly, the word “catholic” means literally “universal.” And that Christmas night at St Mary’s, I was putting into practice some of the universalism I had learnt from a certain Swiss citizen whose name appears in the heading.

Tariq Ramadan did not just come to Australia to enjoy a holiday with his family. He came to deliver a message. Had his journey been a mere holiday, he perhaps would have been one of the thousands of anonymous visitors to one of Australia’s cultural icons, the Sydney Opera House (SOH). But on the night of Boxing Day, 26 December 2004, Ramadan addressed a near-packed concert hall of the SOH ...

Ramadan repeated the same questions he has asked Muslims in numerous talks he has given, articles he has written and books he has penned over the years. How do we understand our faith in such a way that it really does become a universal faith? How do we as a Muslim community become truly accommodating, or need I say, truly Catholic in its literal sense?

It was refreshing to hear the grandson of Imam Hasan al-Banna citing the Brazilian Paulo Coelho’s book The Alchemist to illustrate a subtle shade of Qur’anic meaning. And in doing so, those who understand the message of Ramadan’s grandfather would know that he would not be turning in his grave at his grandson’s grabbing of a piece of wisdom that, like wisdom everywhere, is the believer’s lost property.

Ramadan spent a substantial amount of his address re-defining basic terms we use so often ... For Ramadan ... jihad['s] goal is not killing a maximum number of non-Muslims. Rather, its goal is resistance.

Ramadan said that there can be no Islam without jihad. Islam is peace, and so the goal of jihad must be a resistance that leads to peace. Resistance is the name of the game. And it does not just stop at one’s soul.

In this respect, Ramadan laid out a ground plan of how Muslims can practice jihad in their own communities and nations. How? By joining other Muslims to root out social problems in the Muslim community, problems such as racism. And also by joining with non-Muslims in peaceful action toward social change.

This is jihad and this is Islam according to Ramadan. It is not just about the outer aspects of sunna or prophetic tradition. It is about implementing the simple principles of islam in a complex world. And it is about doing all this in a way that emphasises what we have in common with others.

Ramadan laments the fixation which Muslims in Europe and Australia have with being minorities. It’s as if we want to receive strange looks because we are dying to be different. Yet we simply are not strong enough to achieve the goals of jihad. Yes folks, our jihad is to be conducted WITH non-Muslims, NOT AGAINST non-Muslims.

So my jihad has to be conducted not just with Tariq Ramadan’s audience at the SOH but also with the thousands who joined Cardinal Pell at St Mary’s Cathedral at Midnight Mass.

Put another way, jihad is spiritual love. And love is not just some flimsy emotion from a Robbie Williams song. Love is a spiritual struggle against its opposite and all that resemble that opposite. Negativity is so easy. For many of us, it is our position of inertia. If you want to unite a large group, invent an enemy. Being Daniel Pipes is easy. Being Tariq Ramadan is very hard.

Being a true lover and a true mujahid means being prepared to move beyond hate and resentment and negativity. It means finding commonality with people. It means learning to work with people of all colors, sects, faiths, religions, nationalities, genders … and yes, I will say it … sexual orientations.

That means that I, as a socially conservative Muslim, should be prepared to work with a leftist Catholic and a politically neutral Jew if all three of us believe that certain proposed legislation will curtail civil liberties and human rights. And I should oppose this legislation if the first people whose human rights are affected are refugee animists from Papua.

But try getting most Muslims to understand this sort of thinking. Try getting them to understand that good citizenship is part of taqwa, that there is even an ecological jihad. I could lament and go on and on for fifty more paragraphs, and achieve nothing. I just hope that perhaps Dr Ramadan has the good sense to give the United States the flick and migrate to Australia instead.