On Sunday, thousands of fair dinkum real Aussies will gather at rallies across Australia, raising the Australian flag and shouting slogans. Among the places they'll gather is the central Queensland coastal town of Mackay. Coalition federal MP George Christensen will be speaking. On behalf of Prime Minister Tony Abbott? Reading a message from the PM? Who knows.

A previous Reclaim Australia Rally in Melbourne some months back was characterised by the presence of some, er, interesting people engaging in interesting conduct. A fair few neo-Nazis sporting visible swastika tattoos on shaved heads and/or wearing swastika T-shirts and carrying Aussie flags joined the parade. They were jostling and shouting slogans and carrying placards saying "Abbott! No halal certification" and "No Shariah law!" I doubt even Zaky Mallah would do that sort of thing in an ABC studio. 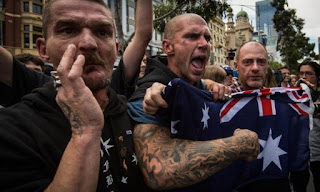 Christensen certainly has more testicular fortitude than Abbott's frontbenchers who have been ordered not to appear on a certain ABC show whose ratings have gone through the roof. Brisbane's Courier Mail reports Christensen declaring he will defy even the PM's orders and attend the rally.

Reading through the 24 pillars of the Reclaim Australia manifesto, I couldn't help but wonder why Abbott would object. There is a call for ...

... which I guess is akin to Abbott's original call for people engaging in terror-like activities to be stripped of their Australian citizenship even if it was their only one.

Where will Indigenous Australians fit in an Australia reclaimed by the far-right white reclaimers? "Equality at Law", screams pillar No. 3, "No more 'cultural considerations'". That should make Andrew Bolt very happy.

The ideology of Reclaim has a distinctly supremacist feel to it. But in case you thought it was fringe, the reclaimers are singing from virtually the same rhetorical and policy songbook as the federal Coalition on cultural and security matters. Despite trumpeting separation of religion and state, Reclaim's manifesto mentions Christian values and rights numerous more times. How often have we heard Abbott and his ministers lecture us on how Australia has a Christian heritage?

It's true that Coalition MPs tend not to jostle and shout slogans and sport swastika tattoos. But as a former federal Liberal candidate, it pains me to say that in so many ways the more contentious political beliefs on issues like culture and citizenship promoted by the Coalition are effectively the same as those of the far right.

It's hard to say who is influencing who. Certainly the Coalition strategy in the 2001 Tampa election was to destroy Pauline Hanson by mimicking her rhetoric on asylum-seekers. Howard would frequently speak of integration and wasn't too fond of multiculturalism.

Ironically, Tony Abbott held the opposite view. He regarded multiculturalism as a fundamentally sound and inherently conservative social policy. Abbott was one of the few frontbenchers who refused to join the chorus of Muslim-phobic and migrant-phobic hysteria around issues of citizenship and national security. In addresses to various audiences, Abbott recalled what it was like for him and fellow Catholics during previous decades when Catholics were demonised.

Abbott is a victim of the far-right. A former staffer of his walked out to join Pauline Hanson. Abbott and his allies worked hard to ensure One Nation was made accountable for financial irregularities. There was little indication in Abbott's quite brilliant manifesto Battlelines that he would go in an extreme direction. True, he did see Australia as within a broader Anglosphere of nations. But his policy platform did not include stripping people of citizenship for spraying graffiti on public buildings.

If Abbott does give the order to the federal member for Dawson not to attend this rally, it will sound almost hypocritical. I have never seen Tony Jones and the Q&A panel and audience wear swastika T-shirts. There has been no jostling or arrests made, nor are racist slogans tolerated. If Abbott doesn't stop Christensen from attending the Mackay rally, it will show he regards far-right white supremacist extremism as being less troublesome than some kid sporting a marijuana cap and suggesting a minister's rhetoric is pushing Muslim kids to join Islamic State. 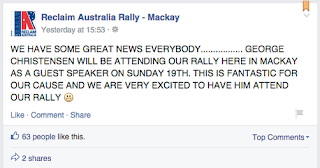 It would not be an exaggeration to suggest that events overseas appear to have radicalised the conservative side of politics in Australia than they have local Muslims. Today we see far-right lunatics and their Coalition friends using IS as an excuse to beat their chests. Sikh temples are being attacked as the chest-beaters are happy to attack anything or anyone they deem Muslim. Only God knows what Asian Australians will experience should China decide do more than build islands in the South China Sea.

This all shows that discussions (or lack thereof) on national security in Australia are rarely conducted in a sensible manner. Phillip Adams recently wrote in the Weekend Australian:


The current liturgy chanted in unison by ministers prime and junior in the Gregorian manner, including Stop the Boats and Death Cult. They are not designed to encourage discussion but to end it. To drown out doubt, debate, calibration, nuance and context.

The results of repetitious paranoid Coalition rhetoric, channelled through ridiculously rabid columnists and shock jocks, will be seen this Sunday. Hopefully it won't be too ugly.

Irfan Yusuf is PhD candidate at the Alfred Deakin Research Institute for Citizenship and Globalisation at Deakin University. First published in the Canberra Times on 17 July 2015.
Posted by Irf at 8:49 pm No comments:

Soon a huge chunk of the Australian population will be eligible to be stripped of their citizenship. Tony Abbott announced


[t]he government will strip Australian citizenship from dual nationals who engage in terrorism.

If you're a dual national convicted of ...

The proposals have been debated for some time now. The electorate has been primed about the dangers of terrorism on an almost daily basis by the Prime Minister, by blaring headlines and screeching columns of tabloid columnists and shock jocks. The other day an angry kid named Zaky Mallah appeared on an ABC TV talk show and declared the government's policies were pushing Muslims to join Islamic State. Abbott doubtless couldn't believe his luck. 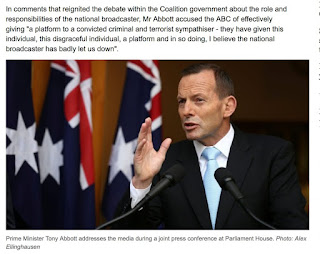 Abbott made out that IS was coming to get us all. Yet delegates were often busy discussing how to deal with far-right extremism of the kind that frequently attacks Muslims and other minorities in places like Germany, Greece and Britain. Australia also has a problem with far-right extremism which has included numerous violent rallies by groups such as "Reclaim Australia". Abbott's silence about this violent extremism is almost deafening. 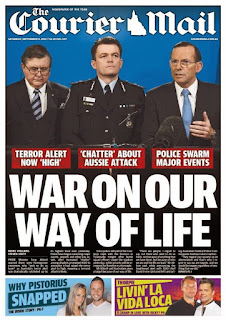 Far-right extremists have repeatedly damaged mosques and Sikh temples. They have physically assaulted and spat on women wearing scarves, stalked and videoed them and uploaded video of them on to social media. Women suffer disproportionately from this kind of not-so-domestic violence as they do violence in the home.


Let me tell you the level of racism, it is absolutely horrific … This is not the Australia that I know and I grew up in.

Diana is not your typical victim of racism. Were it not for her hijab, she could pass for any fair-skinned Anglo-Australian public servant. Her radio station, whose volunteers once included yours truly, insists on only playing English-language programs featuring North American, Australian and British accents.

So when this Brisbane-born Aussie mum hears a London-born PM telling her to join Team Australia, to "get with the program" and condemn IS terrorism "more often and mean it", you can imagine her frustration. Diana's relatives in Lebanon have more to lose from IS. Numerous friends have told me stories of young Lebanese Sunni and Alawi girls in places like Tripoli being kidnapped by IS thugs. Yet still Lebanon opens its doors to Syrian refugees, as does Turkey and Jordan. UNHCR estimates Lebanon houses around 1.3 million Syrian refugees. You won't hear Lebanon's PM saying "nope nope nope".

Still, does this rhetoric from the PM and his ministry really reek of racism? The rightward shift of Australian society has created a strong resentment toward allegations of racism, which tend to be thrown in the "political correctness" bin. At best, we prefer to fight prejudice with token or symbolic measures.

Kevin Rudd has said sorry, so the continuing injustice of the NT Intervention which is exempt from the Racial Discrimination Act rarely makes news. Rosie Batty can be awarded Australian of the Year but her calls to treat domestic violence as "domestic terrorism" fell on deaf ears in Parliament. In this environment, crying racism may not be the best strategy. Maybe remind people of civil liberties, of democracy and Australian values, the stuff that affects everyone. As John Howard often said:


The things that unite us are more important than those which divide us.

Which is all very good for Mr Howard to say. He's a bloke. He doesn't wear a headscarf as a religious obligation. If he converted to Islam (or Judaism or Sikhism for that matter), the only difference he'd have to the average non-hipster would be facial hair.

He doesn't know what it's like to be assaulted, spat at, to have a scarf ripped off his head or have far-right goons stalking him. And notwithstanding Howard's age, he'd probably have much less of a problem getting a legal job than a woman in a hijab with a superior CV to his.

Terrorism rhetoric hits many Muslim women harder because it's mixed with calls for banning burqas which many Australians cannot differentiate from a simple scarf. Considering the often unreported violent experiences of women, there is a definite stench of anti-female and anti-Muslim bigotry which religious spokespersons and politicians often forget.

Abbott may get his desired terror laws. He may look tough on terror and win an election. But if his Team Australia is built on lack of social cohesion and his rhetoric triggers a violent far-right responses, the security he delivers will soon become a mirage.

Irfan Yusuf is a PhD Candidate at the Alfred Deakin Research Institute for Citizenship and Globalisation, Deakin University. First published in the Canberra Times on 24 June 2015.
Posted by Irf at 8:02 pm No comments: