COMMENT: Why fight racism when you can incite racism to sell newspapers? 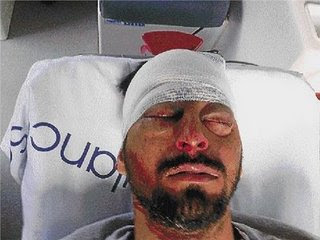 Writing in The Age on May 22 2009, Nazeem Hussain asks some very simple questions about attacks on South Asian (largely Indian) overseas students:

I am another brown person. I can say unequivocally, on behalf of every other non-white person in the country, that hearing about racially motivated crimes frightens us.

To an aggressor bent on beating up a "fob" (fresh off the boat) or a "curry", it does not matter that I was born here, and that my parents came here long before the attacker was born. To the aggressor, I simply match the description of their target.

What concerns me is that each time an attack against an Indian is reported, Victoria Police has quite determinedly ensured the issue of racism is not closely linked to the crime.

Inspector Scott Mahoney said that "sometimes, it's just a combination of timing and chance". Is that supposed to mean that the attackers don't see colour when they incessantly find targets of Indian appearance? These "chance" encounters that he describes are occurring with alarming regularity.

With respect, the inspector's analysis is flawed. Victoria Police has itself claimed that people of Indian background are "over-represented as victims". When both the victims and the aggressors claim that these attacks are racially motivated, what purpose does it serve to avoid a discussion about racism?

The police are charged with upholding the law and fighting crime, whatever its causes. There is little benefit in denying the existence of racist attitudes in our communities ...

So far, we have seen police directing their attention to victims and potential victims, telling them they should not speak loudly in their native language or travel on public transport with their MP3 players on display. Police also set up a hotline for Indian victims after the attack on Sharma. I fail to see how these measures tackle the cause of the attacks.

Now the police plan to go to India to educate Australia-bound students on how to minimise the risk of being attacked.

I thought the police said these attacks were opportunistic? Why, then, are they going specifically to India to advise Indians on safety? Or is this simply a business trip to ensure Indian international students continue to bring education revenue into the state by allaying their fears?

But Andrew Bolt, provocateur-in-chief for the Herald Sun, isn't interested about the race of victims. Why is that, Andrew? Are they of the wrong colour? Instead, Andrew wants to accuse the whistle-blower of being involved in a cover-up.

But, since he’s writing in The Age, he does not dare be frank himself and name (directly) one of the ethnic groups most implicated in these attacks ...

Jeez, Andrew, does it really matter what ethnic background they are when the gangs perpetrating the incidents are themselves of no single ethnicity? What is the point of pointing out each ethnicity of each perpetrator? What will it prove? That non-whites have the ability to be racist also? That perpetrators of every race and colour can be inspired by the same violent and racist sentiments that you allow onto your blog? And that companies like Dell (whose banner advertisement appeared on Bolt's blog when I accessed it) sponsor?

The two most senior Muslim coppers in the UK are being had up, separately, on charges of serious fraud. Their defence is that the police ‘system’ is ‘institutionlly racist’. This is what happens when cultures (not races!) who do not share Western values in the rule of law and blind justice (and much more besides) infiltrate rather than assimilate. It is too late for Britain (and Holland and France and Canada) but not too late for Australia.
Why is it that Hindus don’t run around the planet beheading people, stoning women to death, letting off bombs and flying planes into buildings?
Gardez Bien (Reply)
Fri 22 May 09 (08:08am)

Probably because Hindus are too busy getting bashed up in Melbourne.

Had Andrew Bolt and his cyber-buddies read the balance of Hussain's article, they would have understood his point. There's no point Victorian police heading off to India to warn people there of the dangers lurking on our trains. Maybe what they should do is deal with the problem here. And acknowledge that these attacks are almost certainly racially motivated, regardless of who is perpetrating them.