OPINION: Guantanamo a blot on US image

In January, I toured three Indonesian cities as part of a delegation sponsored by the Australia Indonesia Institute. I visited the American Corner at the Syarif Hidayatullah State Islamic University.

The Corner is a public relations initiative of the US Embassy in Jakarta, consisting of a largish classroom containing a range of books, magazines and other materials about American life and culture in both English and Indonesian.

A particular focus is placed on the status of America's large Muslim minority. Copies of the glossy American Muslim magazines and books authored by Arab and Muslim Americans were prominently displayed. The Corner sought to provide students with a view of American interactions with Muslims that contradict popular Indonesian perceptions.

Not that Indonesian media are exceptionally anti-American, nor blindly towing the line of the pro-US Indonesian Government. 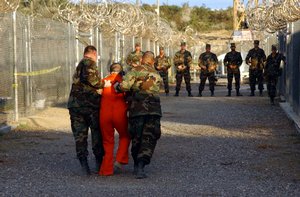 But Indonesians we spoke to from all walks of life were united in their condemnation of one American policy: the continued detainment, often without charge, of some 500 terror suspects at Guantanamo Bay.

Despite attempts at opening communication channels across Indonesia, the White House's refusal to come clean on the extent of torture and mistreatment of Guantanamo prisoners is winning few friends even among otherwise friendlier Muslim communities.

The latest 54-page UN report on conditions at the Guantanamo facility will not help America's cause in the region. The report, prepared by five investigators from the UN Human Rights Commission, calls for its closure without delay.

As expected, the White House rejects the report's findings. It questions the veracity of the report's claims, arguing that investigators did not accept an invitation to visit the facility. But given the US' refusal to allow them unfettered access to inmates, it is little surprise UN investigators were not part of a highly censored and sanitised inspection.

Allegations of torturing prisoners corroborate statements already given by British former detainees and by released Australian detainee Mamdouh Habib. It is possible Mr Habib's allegations will be tested by a court should he bring proceedings against the Australian Government.

It isn't just former detainees with complaints. The recently released book of former Guantanamo chaplain James Yee, For God and Country: Faith and Patriotism Under Fire, was nowhere to be seen at the American Corner.

Yee's dealings with detainees and guards led him to believe that a large proportion of prisoners had little if any relation to terrorism. As soon as he made noises to this effect, Yee found himself the subject of officially spread innuendo and eventually trumped-up charges of spying.

He was also accused of adultery and downloading pornography on to military computers.

Following eight months of high profile detention and investigation that destroyed Yee's career and marriage, all charges against him were dropped without explanation.

Yee was imprisoned at the order of Major General Geoffrey Miller, who later became embroiled in the first prisoner abuse scandal at Abu Ghraib Prison in Iraq. 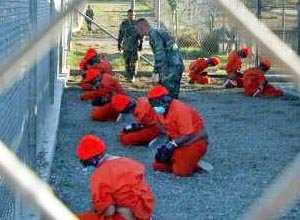 Reviewing Yee's book, Norman Abjorensen wrote in the Sydney Morning Herald that it is difficult to read Yee's account without a rising sense of anger and injustice. The book, Abjorensen continues, brings into sharp focus the inhumane monstrosity that is Guantanamo Bay.

In Australia, at least one South Australian family hopes the UN report will focus attention on one of their own. David Hicks has been imprisoned at the facility since 2002.

Mr Howard refused her request, reaffirming his commitment to the Guantanamo Military Commission process. The Prime Minister claimed he'd received advice that even if Mr Hicks was returned to Australia, he could not be charged under Australian law.

He was reported as saying: "We do not intend to pass retrospective criminal laws. That would represent a very significant regressive move, and it would violate the basis of our criminal justice system."

Within weeks, his Government passed some of the most draconian anti-terror laws containing more retrospective elements than one could poke a stick at.

Canberra's lacklustre concern for the welfare of an Australian citizen is in sharp contrast to the stringent lobbying efforts of the UK and other Western countries with nationals detained at the facility.

It also sharply contrasts with the Government's robust involvement in the welfare of convicted Australian drug smugglers facing death row. It is a disgrace that the Hicks family could end up receiving more support from the United Nations than from their own Government.

Even lawyers appointed by the US military to represent the detainees have stated the Guantanamo military commissions are mere kangaroo courts. Their ultimate result will be a continuing injustice. And as the UN report illustrates, unless the facility is closed altogether, justice will ultimately be denied.

Irfan Yusuf is a Sydney lawyer. First published in the New Zealand Herald on Thursday 23 February 2006.