The federal election campaign is ripe for satire with The Chaser dedicating a new live show to the foibles of politics. Irfan Yusuf went along to the Enmore Theatre in Sydney’s inner-west hoping for a laugh, or two, or three.

In the late 1990’s I found myself working in a law firm in Balmain, a trendy suburb in the inner west of Sydney. One afternoon I walked into the building where my office was located and noticed a pile of newspapers on the floor. The masthead read “The Chaser”. I picked up a copy and took it into my office along with the lunch I had just purchased. It was hard for me to eat lunch as my sides were splitting at the laugh out loud fake and silly news and irreverence of this newspaper. These pages which contained enough blasphemy and defamation to have even the Divine Court sweating with anxiety. Nothing was sacred to The Chaser.

This troupe of white blokes who put together the newspaper, many graduates of the prestigious Sydney Grammar School, were the funniest bunch of private school d!ckheads to hit the comedy scene. Their humour was so juvenile that you wonder whether they were still in their St Ives Prep School. I was laughing myself silly and so loudly that my boss, who was in a conference with a client in the adjacent office, had to enter my office and politely tell me to shut the f#ck up.

Years later I noticed The Chaser were on ABC TV with some ridiculous anti-news show called CNNNN. It really was the staff undergrad university reviews were made of – pranks, toilet humour and irreverent interviews with clergy. It was so stupidly predictable yet it made me laugh.

After 9/11, I wasn’t in the mood to laugh much. Countries that shared my faith were being bombed by countries that shared my culture. The West had declared a War On Terror, though everyone knew it was a war on certain kinds of Islam and Muslims. In Australia, it was a war on just about anyone who was deemed Muslim. This time, The Chaser used juvenile humour to declare a War On Everything. 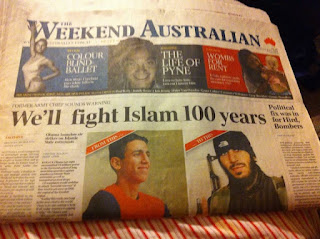 My young step-daughter was affected by the venom thrown at her and people of her faith by the likes of John Howard, Pauline Hanson, Andrew Bolt, Paul Sheehan and other persons off dubious credibility. Her only relief was sitting with me and her mum on a Wednesday night and tuning into The Chaser. We laughed as Osama bin Ladin videos were shown with stupid subtitles declaring a jihad on everyone from Bronwyn Bishop to Justin Bieber. We found it hilarious when Chas would put on a fake beard and a long white robe and interview a terror suspect out on bail. One of our favourite skits was their fake reality TV show The Biggest Muslim. You can still watch it on YouTube.

The Chaser kept so many of my mob sane by lampooning and ridiculing the powers that demonised us – John Howard, Tony Abbott, Philip Ruddock and many more. Even Sheik Taj El-Din Hamid Hilaly, the infamous “cat meat” mufti, didn’t escape Chaser-style pranking. It was all serious fun designed to remind us of how stupid we were to believe the paranoia and prejudice we took for granted.

In 2019 I moved to Perth and found myself working in a toxic environment. In the afternoon I would drive home laughing my head off listening to a podcast of The Chaser afternoon show on Sydney’s Triple-M. By the time I had driven from Mandurah to Rockingham, I was in stitches. After seven hours in such a depressing workplace, The Chaser were the perfect antidepressant.

While I was in Perth, the Perth Comedy Festival invited The Chaser to perform live on stage. It was a two hour show with an intermission. 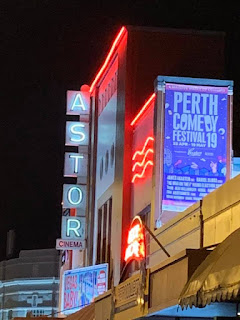 Afterwards, the boys set up a stall outside the theatre where you could buy merchandise and have your photo taken with the stars, among them a grumpy Charles Firth and some tall blonde dude who looked like an actor in Home & Away. 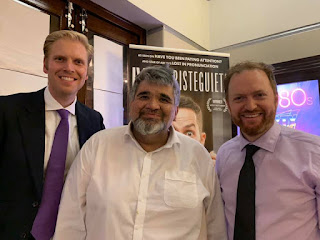 So it was with high expectations that last week a friend and I went along to watch The Chaser at the Enmore Theatre as part of the Sydney Comedy Festival. This was a condensed show (only one hour) and the boys looked very tired. Their audience (including me) were also exhausted thanks to all that Omicron crap.

I hate writing critical reviews. I know how hard artists work, Comedy is tough even when you’re a seasoned comedian with a massive reputation. I’ve been backstage with Nazeem Hussain before a show and watched him pacing the floor nervously rehearsing his lines and gestures. But honestly, the worst thing I can say about The Chaser on this night is that they were very tired and one hour wasn’t enough time to flesh out their comedic argument. Their performance was brave and valiant, reminding me of former Australian cricket captain Alan Border scoring a century with severe injuries.

So much political satire consists of “in jokes” designed to give you a warm feeling inside as if you are laughing with the intelligentsia. This wasn’t The Chaser. Even a political novice would have understood the jokes. Some skits involved a strong degree of audience participation. I felt part of the performance, not just a spectator.

The highlight for me was watching Mark Humphries skewer the former head pastor of Hillsong. Sheer genius.

Perhaps the best praise for The Chaser came from an American lass who worked at Elizabeth’s Bookstore in Newtown. I went there to see if I could pick up some old copies of The Chaser magazine. “You’ll find them in the Australiana section,” she told me.

Why put them there when they should be in the humour section?

I’m sure my step-daughter would agree.

First published in True Crime News Weekly on May 17 2022.