HUMOUR: Nazi-lover learns how to spell ...

For those of you who don't know, Sheik Yermami is a neo-Nazi blogger whose past posts have included this gushing tribute to a deceased far-Right and notoriously anti-Semitic Austrian politician.

Yermami now claims that someone using a computer (one which I also use from time to time) has left messages on his blog.

Among the messages is one that I acknowledge leaving, and in which I had to correct Sheik Yermami's spelling. Yermami thanked me for the spelling lesson, but then posted this point ...

Does that change the fact that Binyam Mohamed is not a “Briton” and that you and GANDHI have nothing in common?

Gandhi and I have nothing in common? Let's see ...

a. Gandhi and I are of North Indian extraction, he from Gujrat and my ancestors from Uttar Pradesh.

b. Gandhi spoke a language which the Poms once called "Hindustani". I speak the same language.

d. Gandhi was a lawyer. I'm a lawyer.

Clearly Gandhi and I have absolutely nothing in common. My apologies to Yermami for making such a dreadful error.

But what about the other messages Yermami refers to? Jeez, how should I know? It could be any number of relos or friends, including the friend who pointed out Yermami's post to me. Tim Blair's defence shouldn't just work for Tim Blair.

I guess being a Nazi never required much brain power ...

UPDATE I: In one recent post, Sheik Yer'mami features a cartoon of me as follows: 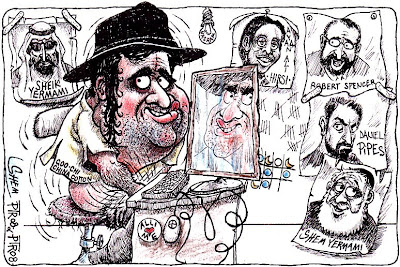 Notice the shape of the black hat, the side locks and the largish nose. Yes, this here sheik is a true Nazi, happy to describe me as "fact and truth-challenged" and illustrating his claim by making be resemble an observant Jewish male. In the mind of this "sheik", being dishonest and observing Judaism are one and the same. The ultimate in dishonesty, in the eyes of this neo-Nazi blogger, looks something like this ... 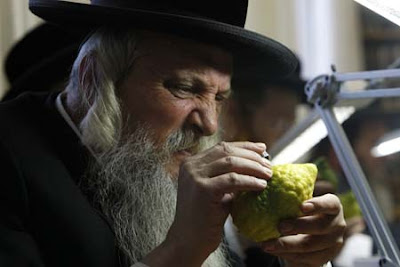