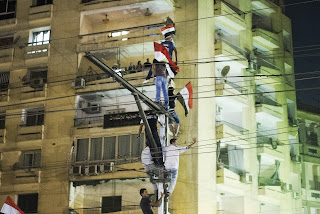 Indeed, Egypt's counter-revolution is being televised to those who care to watch. Egyptian protests are making international headlines while their parallel international equivalents are being ignored by our allegedly honest independent Western media outlets. Indonesia, the world's most populous Muslim nation and perhaps Asia's most vibrant democracy, has close spiritual ties to Egypt, home to Al-Azhar University in Cairo, perhaps the most Sunni Muslim seminary in the world.

Large numbers of Indonesian religious scholars are Al-Azhar graduates. Egyptian religious culture is regarded as reflective of the epitome of orthodoxy in many parts of the archipelago. Hence Indonesians have hit the streets following the 3 July coup.

The United States prefers not to use nasty terms like "coup" to describe the military removal of a democratically elected government followed by a massacre of its citizens. To do so would threaten its ongoing $1.5 billion military aid package to the Egyptian military which underpins the Camp David Peace Accord with Israel. Protecting the security needs of the only democracy in the Middle East is far more important than supporting nascent democracies in other Middle Eastern nations. Or to quote the Israeli ambassador to Cairo: "Al-Sisi is not a national hero for Egypt, but for all Jews in Israel and around the globe."

Saudi Arabia has now directed its Salafist allies in Egypt to back the Egyptian generals. It is also using its influence in the Arab media to flex its muscle. In Kuwait, well-known preacher Tareq el-Swaidan has been sacked as director of a Saudi religious channel due to his Brotherhood links.

The Saudi prince Al-Waleed bin Talal wrote on Twitter that Mr Swaidan had been dismissed "for admitting he belongs to the Brotherhood terrorist movement". The Saudi dictatorship has pledged $5 billion to the military junta.

First published in the New Zealand Herald on Tuesday August 27 2013.