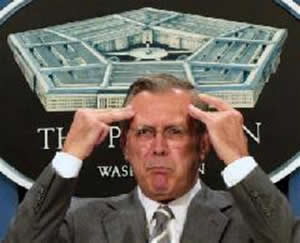 GQ Magazine carries an interesting and lengthy feature article profiling former US Defence Secretary Donald Rumsfeld through the eyes of his colleagues in the Bush administration. You'd think those working with Rumsfeld would be somewhat more charitable than openly ridiculing him. No such luck for Bush'd war monger.

... in speaking with the former Bush officials, it becomes evident that Rumsfeld impaired administration performance on a host of matters extending well beyond Iraq to impact America’s relations with other nations, the safety of our troops, and the response to Hurricane Katrina.


A major criticism of Rumsfeld was his insistence on stalling decisions that had to be made. This had a direct impact on the military tribunals at Guantanamo.

The Department of Justice got a taste of such stalling tactics two months after September 11, when the president issued an order authorizing the establishment of military commissions to try suspected terrorists. Rumsfeld resisted this imposition of authority on his DoD turf. “We tried to get these military commissions up and running,” recalls one former DoJ official. “There’d be a lot of ‘Well, he’s working on it.’ In my own view, that’s cost the administration a lot. Hearings for detainees would’ve been viewed one way back in 2002. But by 2006”—the year commissions were at last enacted—“it’s not so appealing.”


Rumsfeld also wasn't so keen to share access to American intelligence capabilities to its allies including Australia.

Similarly, Rumsfeld delayed the implementation of a 2004 presidential order granting our Australian and British allies access to the Pentagon’s classified Internet system known as SIPRNet. “He always had what sounded like a good reason,” says one of Bush’s top advisers. “But I had a lot of back channels and found out that it was being held up.” It finally took Australian prime minister John Howard forcibly complaining to Bush about the matter in the fall of 2006 for SIPRNet to become accessible.


It's great to see Howard putting his foot down to Bush about something.