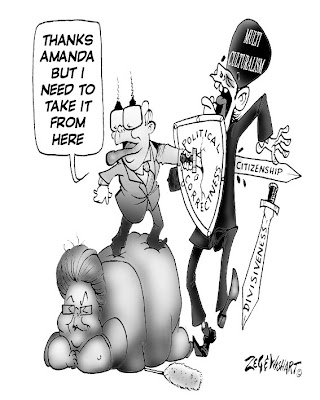 Discretion was used by former Immigration Minister in the Howard government, Kevin Andrews, to cancel Dr Haneef's visa after he was granted bail in relation to terrorism charges that were eventually dropped and are now the subject of a Federal Inquiry costing millions of dollars. Almost as much as the original bungled Haneef investigation and prosecution cost.

Andrews justified his actions on national security grounds. But in the end, not even Haneef's UK SIM card was a vehicle for terrorism.

Another suspect was the subject of more generous ministerial discretion exercised by Andrews' predecessor, Amanda Vanstone. The Age reports today that Vanstone exercised her discretion to allow Francesco Madareffi into the country, arguing it was "in the interest of Australia as a humane and generous society".

Madareffi "claimed to suffer serious mental health problems and had been involuntarily admitted to a mental institution during his fight to remain in Australia". Hence Vanstone granted him a permanent spouse visa "as a discretionary and humanitarian act to an individual with a genuine ongoing need".

And a friend in need is a friend indeed. Especially if he and members of his family show financial generosity and humanity to Liberal Party coffers and have the support of at least four Liberal MPs. I mean, who cares if the guy was deported by Vanstone's predecessor in 2000 "because of his alleged involvement in serious crimes in Italy in the 1980s, and because he had overstayed his visa and was in Australia as an illegal immigrant"?

Let's be sensible about this. Surely a terror suspect not accused of any violence but merely of giving his cousin a SIM card is a greater potential threat to our security than a suspected mafioso. And a name like Francesco sounds far less threatening than Mohammed.

On the other hand, as Peter Reith pointed out on the eve of the 2001 Federal Election, those Afghan and Iraqi people on them leaky boats travelling from Indonesia might well be terrorists. The fact that they're escaping terrorism and are victims of governments our armed forces helped overthrow is irrelevant. Clearly their mental health issues weren't serious enough for the Howard government to release them.

So there we have it, folks. More double standards of the Howard government on national security exposed. Clearly what Dr Haneef should have done is change his name to Francesco, convert to Catholicism and have his wealthy father-in-law donate truckloads of cash to the Liberal Party. As should impoverished Iraqis, Afghans and others (including children) who rotted away under our policy of mandatory detention. In the Howard government, money always spoke the loudest.

First published in the Crikey daily alert for Tuesday 23 September 2008.