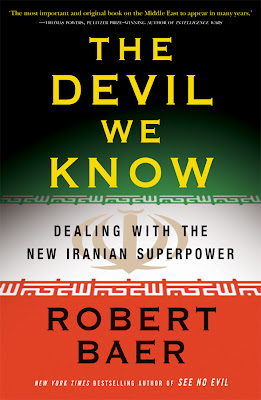 I’ve just finished reading a ripper-of-a-book by former CIA operative Robert Baer about Iran. The book is entitled The Devil We Know: Dealing With The New Iranian Superpower and was published in 2009.

I kept detailed notes of the book for the prologue which I’d like to share if for no other reason than that I’d like to throw them out and return the book to my shelf. So here goes:

[01] Iran’s war with the United States was undeclared on Iran’s part and largely ignored on the US’s part. The US at one stage was too busy fighting the Cold War.

[02] Iran and its proxy Hezbollah found ways of fighting an unconventional war against the US with precision-guided rockets, roadside bombs and human suicide bombs.

[03] The Gulf has 55% of the world’s oil reserves which Iran is now close to controlling.

[04] The cult of martyrdom plays a central role in Iran’s political ideology. Iranians say that no army can come in the way of martyrdom.

[05] Iran believes it has enough military power to challenge US interests in the Gulf. Iran is the new superpower, with unconventional warfare methods that could easily bring a conventional army to a standstill.

[06] Iran has all but abandoned Khomeini’s revolution. It is a rational actor which coldly and methodically pursues its national interest. Scratch at the veneer of Islam and what you get is old-fashioned nationalism.

[07] Iran’s proxy Hezbollah was the irst military force to defeat Israel on the battlefield since it was founded. Hezbollah defeated Israel again in the 34 day war of 2006. Israel withdrew with heavy losses achieving not a single military objective, and indeed strengthening Hezbollah’s presence in Lebanon.

[08] US interests in the Middle East were founded on the old Sunni order which has all but collapsed.

[09] This book is about defining Iran’s imperial drive.

This book is a riveting read, though at times it is prone to generalisations and a fair bit of the explanation of Sunni and Shia theology is just plain wrong. However, the basic proposition is well-argued and compelling.

You can read an excellent profile of the author by Rod McGuiness here. 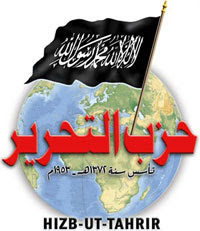 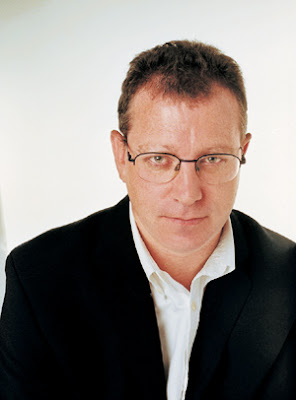 Hizbut Tahrir (or "HT" for short) are a political party that wants to re-establish the Caliphate using various means. These include handing out pamphlets at mosques after Friday prayers, sticking up posters on Matthews Street Punchbowl and holding conferences in various parts of Sydney.

I've been to one of their conferences. Not terribly interesting affairs. But I have written about them. Here's something appearing in The Age some years back:

HT teaches that active involvement in democratic politics represents a fundamental breach of the sacred law. Democracy and secularism are declared un-Islamic, voting is forbidden and membership of secular political parties regarded as virtual apostasy. HT insists Muslims work outside the system and re-invent a more "Islamic" wheel, an approach seen by the well-integrated majority of Muslims as an exercise in futility.

Although HT's goal is the re-establishment of the caliphate, they have no clear plan of action. At this stage, HT does little more than distribute pamphlets and hold conferences.

And for something less serious, here's an excerpt from a piece in NewMatilda:

... the Muhammadiyah, one of Indonesia's two main Islamic 'churches.' At last count, the youth group of Muhammadiyah consists of a handful of members around 10 million. The other group, Nahdhatul Ulama (NU) has around 20 million in its youth wing and around 40 million in its senior wing.

The Indonesian wing of HT has around 150,000 members. Excuse me while I check my blood pressure ...

... HT's clumsily expressed methodology attracts so few people, and their ideology is so fringe, that they'll be lucky to take even a first step toward achieving any caliphate. HT should be compared less to al-Qaeda and more to the galaxy of loony socialist groups on campus seeking to establish socialism.

Suffice it to say that HT can't exactly count me as one of their media buddies. And they know it. Look at what they had to say about my piece at the Muslim Village idiots' forums.

Of course, there are some places where the HT crowd know their message will be reproduced almost unadulterated. Fringe attracts fringe, and the fringe fruitloop who edits the opinion page of Sydney's Daily Teleraph has shown his willingness to print entire press releases of HT as op-eds. Tim Blair is one of the few friends on the media HT can count on.

Which made me curious as to why Blair would describe yours truly as one of HT's "media defenders". Does Blair know something that even hard-headed HT aparatchiks don't?

When it comes to hpolding narrow-minded tunnel-visioned nonsensical positions and attract mainly complete morons to their discussions, Blair and HT have plenty in common. 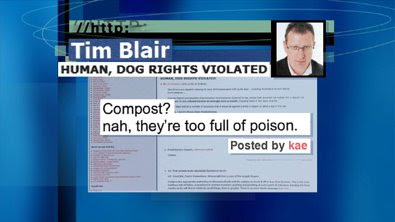 OPINION: The fuss over the burqa is out of kilter ... 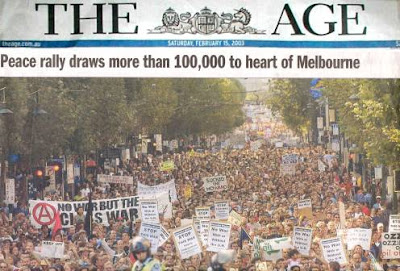 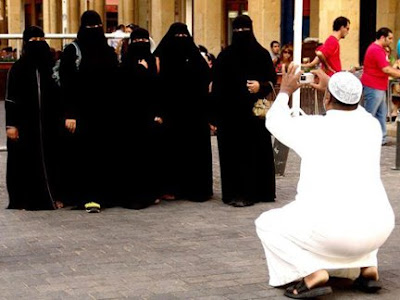 Sarkozy's focus on a tiny minority who cover up risks alienating most Muslims, writes Irfan Yusuf.

IN ABOUT six months, a cross-party French parliamentary committee of 32 MPs will prepare a report examining whether the wearing of the burqa (an outfit, usually black, that covers a woman's full body, including her face) in public represents a threat to French secularism. They'll also determine whether to ban it being worn in France.

The committee was formed after French President Nicolas Sarkozy addressed the French Parliament on June 22 and described the burqa as "a problem of liberty and women's dignity" and "not welcome in France".

Sarkozy further claimed that the burqa was not a religious symbol at all, but rather "a sign of subservience and debasement", which created "women prisoners behind a screen, cut off from all social life, deprived of all identity".

Of course, even if Sarkozy regarded the burqa as a religious symbol, he might still ban it. In the past, he hasn't been averse to banning the open display of religious symbols in French state schools.

Sarkozy was originally behind the push to proscribe the hijab (headscarf) from state schools, only to subsequently oppose specific legislation, introduced in 2004, which saw the wearing of all religious symbols in state schools prohibited.

Many French, and indeed many Australians, find the various shades of religious head covering adopted by Muslim women somewhat troublesome. Women draped in black represent one of the most potent stereotypes of Islam in the West, one reinforced by media images. When one Sydney Muslim man called for polygamy to be legalised, the Herald Sun website carried a photo of two burqa-clad women crossing the street. The website of its Sydney equivalent regularly carries photos of burqa-clad women in any story even mildly related to Muslims. On August 8, 2007, in a story on an investigation into a refugee housing project run by a main Muslim body, The Daily Telegraph showed the image of the top half of a fully veiled woman's face.

It's unclear exactly what proportion of Muslim women wear any sort of head covering when in public, though anecdotal evidence suggests only a minority do. Among those who cover, the vast majority seem to follow the religious consensus and restrict themselves to merely covering all or part of their hair. This can take the form of a more fixed hijab (as commonly worn in the Arab world and South-East Asia) or a loose shawl draped over the head (common in Iran and South Asia).

The vast majority of Muslims in France are from North Africa where the face veil is rarely worn. This naturally raises the question: with such a tiny minority wearing such a veil, why is Sarkozy using his precious time talking about this issue?

Sarkozy's remarks are reminiscent of former prime minister John Howard's frequent references to alleged non-integration of Muslim Australians. Yet in one radio interview Howard declared 99.9 per cent of Muslims were perfectly integrated. I wondered at the time whether his repeated emphasis on the 0.01 per cent non-integrated was little more than an attempt to create an environment where the 99.9 per cent were made to feel uncomfortable.

No women in my family cover their hair. However, my maternal grandfather, who lectured at the relatively liberal Aligarh Muslim University in India, insisted the women of his household practise a form of traditional aristocratic seclusion known as purdah. Though associated with Indian Islamic culture, purdah was also practised in many upper-class north Indian Hindu and Sikh households.

It was common in those days for wealthy women to go out shopping while seated in a special palanquin (called a dholi). This was basically a large, comfortable, box-like structure with plenty of cushions for aristocratic women to laze on while their male servants (or even male relatives) would carry them. The curtains around the box had a screen through which the women could peek and decide which shop they would visit.

Women's quarters in 1950s Aligarh homes were places where women enjoyed themselves, freed of any domestic duties, their husbands or fathers employing servants to perform all cooking and other chores. Men were expected to lavish gifts on their female relatives (and in-laws) using the household income, which women were usually responsible for managing (I'm sure to their own advantage). Men were also expected to do all the shopping for food and other household needs. Women only shopped to buy clothes, jewellery and other luxury items for themselves.

Of course, the situation for the aristocratic Indian woman in purdah was a far cry from impoverished women living in Afghanistan under the Taliban. Purdah did not stop my mother from completing high school and a bachelor's degree. The idea of banning women from education or work would be anathema to most Muslims, including the one in four of South Asian heritage.

France has the largest Muslim population of any country in Western Europe.

By focusing on a tiny minority of Muslim women, Sarkozy risks alienating the majority of French Muslims, including those who agree with his basic proposition that the burqa is offensive and degrading to women.

Irfan Yusuf is author of Once Were Radicals: My Years as a Teenage Islamo-Fascist, published by Allen & Unwin. This article was first published in The Age on Monday 6 July 2009.