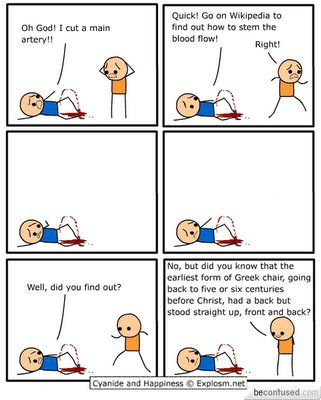 I've been having fun following changes to an entry made about me on Wikipedia. In particular, I've enjoyed following some more malicious entries made by one person who calls him/her/itself "Johnnyturk888".

It seems JT888 is determined to paint me as some kind of child of bin-Ladin.

While in Pakistan, he attended an Islamic religious school, called a maddrassa where he came to believe in sharia law and an Islamic form of government.

I attended a madressa in Karachi for a period of 6 months. I was 6 years old at the time. How a 6 year old could come to believe in any particular legal and governmental system beats me.

Then there is this classic:

In 2009, Yusuf was part of a Christian photo opportunity washing the feet of the homeless.

Actually, I have been washing feet with Bill Crews and a few Buddhist monks on the Thursday morning before Easter since 2006.

I'm not sure who Johnnyturk888 is, but one Wikipedia moderator has this to say about him/her/it:

Johnnyturk888 has been on a continuous campaign to smear and undermine the subject of this biography. The problems with his edits have been pointed out repeatedly, yet he repeats them over and over again ... His attacks on Yusuf aren't overt, but their derogatory intention is clear in the aggressive insistence on misleading and inaccurate depictions including poorly sources material and statements taken out of context. I don't want to spend any more time reverting his edits, so I think it's time that Johnnyturk888 is encouraged to move along.

It's a bit hard for someone in the throws of complete obsession to move along. Still, JT888's strange fixation with me does make entertaining reading.