Over the past week, there have been two devastating terror attacks. The Nairobi shopping mall shootings included many Western casualties and have been widely reported. The other attack, on a church in Pakistan, has barely rated a mention.

A cynic might suggest Western media regard the shedding of the blood of brown-skinned Catholics by the Tehrik-i-Taleban Pakistan ("Student Movement of Pakistan" or the Pakistani Taleban) as less newsworthy than the murders of Westerners by the Somali Harakat al-Shabaab al-Mujahideen ("Movement of Striving Youth" or al-Shabaab). But that is a discussion for another time.

What matters now is that we have two sets of victims struck by effectively the same perpetrator inspired by the same demented ideology. Whether the Pakistani Taleban or al-Shabaab, what we have is a global ideology seeking to impose its own demented political theology by force. 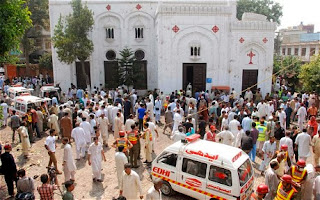 Like its al-Qaeda colleagues, the Pakistani Taleban rarely discriminates on the basis of religion. Though calling itself an Islamic group, it will happily spill Muslim blood. Shia mosques and neighbourhoods have been subjected to suicide bombings.

Sunni security personnel, soldiers and innocent civilians have been blown to bits by suicide bombers.

But its most recent attack on the All Saints Church at Kohati Gate in Peshawar deliberately targeted one of Pakistan's most disadvantaged faith communities. The service had just ended and the 400 worshippers were leaving the building when two suicide bombers detonated their devices.

Eyewitnesses reported around 100 parishioners lay in pools of blood. At least 80 were dead, more then half of them women and children.

It was the worst attack on Christians in Pakistan's history.

The church was built in 1882 on the design of a mosque, with a dome and minarets. It is one of a handful of churches that service some 60,000 Christians in Peshawar.

So why did this happen? Kamal Siddiqui, editor of the Express-Tribune, writes:

Pakistanis are dying in large numbers, mostly at the hands of religious militants who insist that their war is with America and not with us. One does not understand the logic of this. But it is an ideology that finds favour with many.


Pakistan is a country where there is too much tolerance for intolerance. On the same day as the church bombing, a mob in the Punjabi city of Sialkot threatened to remove the minarets of an Ahmadi house of worship. The Ahmadis are a small sect regarded by law as non-Muslims. Their houses of worship cannot be called mosques.

When the mob threatened to attack the Ahmadi building, police themselves tore down the minarets.

And so a church in Peshawar can have minarets but not a Ahmadi house of worship.

Pakistan is a country in which all kinds of excuses can be found for division. The Taleban need not try very hard to sow chaos. The chaos is already there. So often Pakistanis complain about American drone attacks. And rightly so. But more Pakistanis are murdered in sectarian violence than by drone missiles. 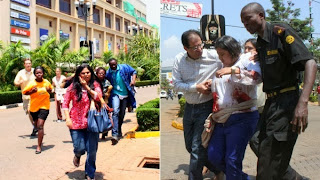 The Taleban temporarily ruled parts of Pakistan before being driven out by the army. In this respect, they have something in common with al-Shabaab in Somalia.

According to a 2011 report by Ron Wise of the Centre for Strategic and International Studies, the militia started its life aligned to a moderate (or rather, somewhat less extreme) Somali Muslim party called the Islamic Courts Union (ICU).

Before that Somalia was a basket case where competing warlords committed all kinds of atrocities against civilians.

Religious leaders in the Somali diaspora are almost unanimous in their condemnation of al-Shabaab. In Minnesota, home to the largest Somali community in the US, local imam Abdul Hashi told journalists, "This type of activity, the killing of innocents, has no basis in, or relationship to Islam," and cited the Koran: "Whoever kills one soul, kills all of humankind, and whoever saves one soul, saves all of humankind."

Which makes the actions of al-Shabaab and the Pakistani Taleban pure evil.

Irfan Yusuf is a Sydney lawyer. First published in the NZ Herald on 26 September 2013.
Posted by Irf at 10:21 pm No comments: