COMMENT: The columnist who wants to bomb Iranians accuses his opponents of not doing enough for them ... 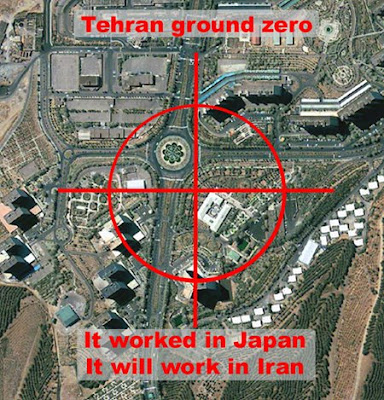 Back in January 2007, Greg Sheridan praised former US President George W Bush for defying conventional wisdom and popular sentiment in his foreign policy adventures. His column of 11 January began with these words:

A US military strike against Iran must now be considered formally on the international agenda, following George W. Bush’s sombre, calm, but in substance extraordinarily bold address on Iraq . Bush accused Iran of providing material assistance for attacks on US troops in Iraq . It is hard to imagine a more serious accusation. What’s more, Bush promised to stop such Iranian actions. Whatever you think of Bush, he has a very high level of credibility when it comes to carrying out any threat he makes of military action.


Given Sheridan ’s near-obsessive grovelling of all things Bush, I have little doubt that Sheridan would have supported a full scale invasion of Iran . Forced regime change was good enough for the Iraqi goose, and in Sheridan ’s eyes would be just as good for the Iranian gander. Heck, what’s a few hundred thousand dead Iranian civilians?

Yet the other day Sheridan has the gall to claim that the so-called “Western human rights lobby” has been doing bugger-all to support Iranian protesters Sheridan would have been quite happy to see the Yanks and/or Israelis bomb the crap out of. Heck, just a week earlier Sheridan was happy to consider the utility of “a limited military strike” against Iran.

[a]part from ethnic Iranians, there has hardly been a single demonstration in any Western capital in support of the Iranian democrats. Yet isn't there a class, in Australia and in the rest of the West, of people deeply concerned about human rights?


He then has a go at Louise Adler for criticising Israel and Michael Leunig for having a cartoon in an Iranian competition which he didn’t actually submit and had no idea was being submitted anyway. And what does all this prove?


Actually, what it proves is that Sheridan doesn't know what he's talking about. He should name just one of his critics who has called upon Iran to be bombed and invaded in the manner he has. But then on Planet Sheridan, if you don’t draw a cartoon for Iranian protestors or you don’t march through the streets, you clearly don’t like Iranian democrats as much as if you’re happy to see them and their families blown up by American and/or Israeli bombs. Go figure. 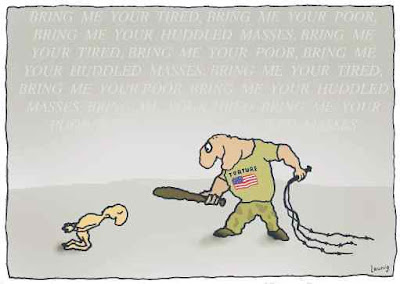 Uncle Sam stands at the top of a flight of stairs, looking more than slightly perplexed. Below him is a windowless chamber its sparse furnishings consist of a lamp, a wooden bench and a closet shaped roughly to the contours of a human body, spikes emerging from its rear wall. A man hangs from the roof, his ankles bound. Below him stand a Caucasian man dressed in a Nazi uniform, a hooded Spanish inquisitor brandishing a sword and a third man in military fatigues and an Arab head-dress.

All three are watching Uncle Sam, inviting him to join them, the third man stating:

C'mon down. Once you take the first step, it's easy.

What I've just described in words is a cartoon by Philadelphia Inquirer cartoonist Tony Auth. It's only now, with debate over the use of torture in the "war on terror", that we're discovering just how deep the Leader of the Free World had descended.

The frequent mantra recited by Western political masters was that we were in a war against terrorists who hated us because of who we are, because of our values. Terrorists despised us for being civilised. They wanted to replace notions such as democracy and the rule of law, which we stood for, with terror and lawlessness. This was a war for civilisation, a fight to defend freedom.

Yet within a mere six months of the 9/11 attacks, top officials of the CIA were happy to flout the rule of law and to breach the very values they claimed to protect. To use the words of North Carolina Senator Lindsay Graham, the Bush administration saw the law as a nicety we could not afford.

This new lawlessness incorporated the use of harsh interrogation techniques (read torture) such as waterboarding. In this torture, a prisoner is bound to an inclined board, his feet raised and his head slightly below the feet; then cloth is wrapped over his face and water is poured over him. Unavoidably, the prisoners gag reflex is activated and he feels convinced he is drowning.

One CIA prisoner, Ibn al-Shaykh al-Libbi, is said to have been subjected to waterboarding that proved so effective that he provided false evidence of a link between al-Qaeda and the former Iraqi regime of Saddam Hussein which led to the 2003 invasion. Al-Libbi made these fabricated claims as he was terrified of further harsh treatment.

Even if we accepted claims by United States lawmakers that torture was used to protect Americans, al-Libbi's torture was clearly used for political purposes to justify a war the Bush administration was determined to fight even before the first jets hit the World Trade Center. Once evil means are adopted even for seemingly noble ends, the lines between good and evil soon become blurred.

Al-Libbi's treatment is just the tip of the iceberg. Thousands of people have been detained in various US detention facilities, both known and secret, including in Indonesia, Eastern Europe, Africa, the Middle East and Guantanamo Bay. Among them were two Australian citizens David Hicks and Mamdouh Habib.

Yet while US media seem almost fixated with the role that Republican and Democrat lawmakers and US government officials played in ordering and executing torture of detainees, few Australian journalists have considered what role (if any) the Australian government may have played or at least what knowledge it may have had of the torture of Australian citizens at Guantanamo Bay.

And yet now the US is reluctant to settle Guantanamo detainees on its own territory. Meanwhile US President Barack Obama is reluctant to release further documents and photos of torture conducted by the CIA for fear it will further inflame tensions. It is this very secrecy which provides a perfect cover for even more abuse.

Regardless of how painful the process may be, the US must take responsibility for the consequences of its inquisition. Yet all we seem to be hearing from Obama is empty rhetoric about how the US does not torture the same rhetoric used by his predecessor. Obama chose Cairo as the location to give his speech to the nominally Muslim world.

Cairo was also the place where Australian citizen Mamdouh Habib was sent by the US to have terrorism confessions extracted from him using the most brutal forms of torture. In his memoir My Story: the tale of a terrorist who wasn't, Habib outlined not just his own torture but also the suffering of other inmates also beaten and drugged.

During his Cairo address to an audience of political leaders and diplomats from Muslim-majority states, Obama admitted the US had acted contrary to its ideals by instituting torture. Yet among governments represented were those which will continue to implement the US policy of extraordinary rendition or the secret abduction and transfer of prisoners to countries that will carry out torture on behalf of the US.

The Washington Post reported on February 1, 2009, that Obama issued executive orders allowing the CIA to carry on with renditions. He further allowed the CIA to detain suspects in facilities used only to hold people on a short-term, transitory basis. America will effectively now outsource Guantanamo-type operations to the generals, sheikhs, colonels, dictators and presidents-for-life who will no doubt torture not just those deemed terror suspects by the US but also domestic political opponents.

The United Nations High Commissioner for Human Rights recently urged all those involved in the torture process including doctors, nurses, psychologists and lawyers to be pursued and not let off the hook. Australia and New Zealand can play a role in this process, given that both are the only two nations in the Pacific region to have ratified the Convention Against Torture. Yet given the lacklustre performance on the part of John Howard and Kevin Rudd on the treatment of former Australian citizen detainees at Guantanamo, one cannot expect too much from Australia.

Terrorists may hate us for our values, but clearly we don't seem to like our values too much either.

Irfan Yusuf's first book Once Were Radicals about young Muslims flirting with radical Islam was published by Allen & Unwin in May 2009. This article was first published in the Canberra Times on Tuesday 7 July 2009.