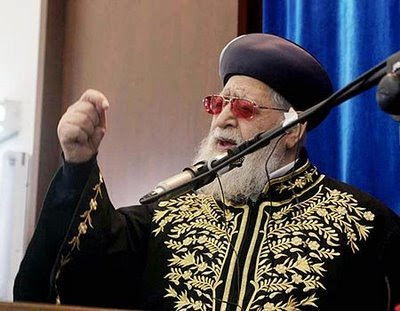 Here's something you won't find mentioned at Andrew Bolt's blog. The leader of Israel's Shas party recently described US President Barack Obama as a slave.

Rabbi Ovadia Yosef is regarded as the spiritual leader of Shas, a Jewish fundamentalist party which supports the building of illegal settlements on stolen Palestinian land. Yosef was speaking in opposition to pressure from the Obama administration to cease building new settlements in the West Bank.

Here's how one news outlet reports it:

Rabbi Ovadia Yosef, spiritual leader of Israel's ultra-Orthodox Shas Party, has slammed U.S. President Barack Obama, describing him as "a slave" who seeks to rule the world and control Tel Aviv's affairs when it comes to construction of settlements in occupied Jerusalem, reports say.

"American insidiousness tells us to build here and not to build there, as though we were slaves working for them," he said in his weekly sermon Saturday, adding: "We live in a time when slaves are governing us and are trying to control us."

Turning down the Obama administration's request to stop illegal construction of settlements on Palestinian occupied territories, he said: "We are not employees of the Americans.. and Israel does not work for the United States."

Yosef then takes a leaf out of the book of Andrew Bolt and his blog fan club, making a racist attack on Arabs and wishing for their destruction.

The senior Rabbi then addressed the issue of Haram al Sharif (Dome of the Rock) saying: "...and where is our temple? The situation there is cause for grief. There is nothing there but evil Arabs who are occupying our lands…and I hope that the messiah will appear soon to destroy them."

The comments about Arabs were also reported by JTA which for some reason toned them down a little to read ...

Where is our temple? There are Arabs there!

Yosef isn't, of course, representative of mainstream Jewish opinion. Unlike Andrew Bolt and Tim Blair, I won't attempt to sheet home responsibility for his racist statements to Australians who happen to tick the "Judaism" box on their census forms. Nor will I demand that "moderate Jews" everywhere speak out and condemn these remarks, failing which they risk being labelled "Judeo-fascists". I know that Yosef is known for making obscene and imbecilic remarks that have even directly offended Jews.

Born in Iraq in 1920, Yosef is a former Sephardic chief rabbi of Israel and a controversial figure who has in the past referred to Arabs and Palestinians as "snakes" and "vipers" who were "swarming like ants" ...

In 2000 he sparked outrage when he said that the six million Jewish victims of the Nazi Holocaust did "not die for nothing," but were the "reincarnation of Jews who had sinned" in previous generations.

Members of Yosef's party are being linked to a massive money laundering and illegal organ trading investigation by the FBI. Among those whose organs were removed were impoverished Israelis. The Israeli newspaper Ha'aretz reports ...

Politicians expect the amount of funds contributed to institutions affiliated with or close to Shas, and its spiritual leader Rabbi Ovadia Yosef, will feel the pinch almost immediately ... One of the major figures arrested in the suspected money laundering case is Rabbi Eliahu Ben Haim, who is considered very close to Rabbi David Yosef, one of Rabbi Ovadia Yosef's sons ... Another person arrested in the affair is Rabbi Edmund Nahum, who is considered very close to Rabbi Ovadia Yosef himself. Nahum was also involved in raising funds for the Yosef family institutions.

The Israel Police and the Justice Ministry's Israel Money Laundering and Terror Financing Prohibition Authority will soon start investigating the Shas and other Sephardic institutions' yeshivas implicated in the scandal. The investigation may also include the banks suspected of transferring the allegedly tainted funds.

I guess it's hard to be a racist and a financial cleanskin at the same time no matter what your religious affiliation is.